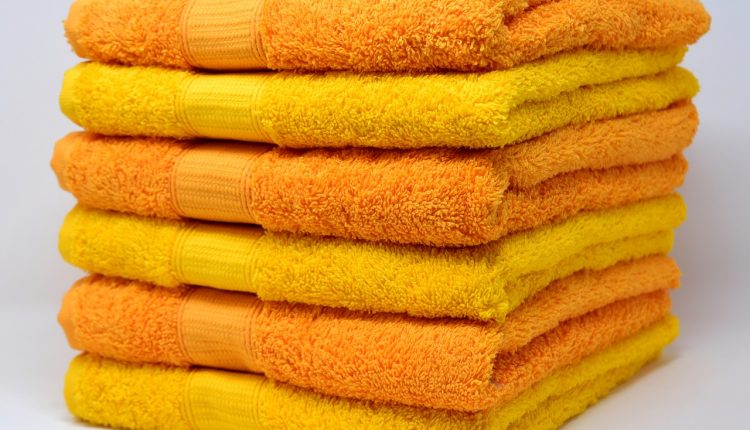 Terry towels are woven as 2, 3, 4, 5 or more pick terry weaves. The most common type is 3-pick terry towelling. The cross-section of a towelling through the Warps are divided into two systems as shown in Figure 3, pile warps and ground warps, whereas wefts consist of only one system. In basic Turkish Toweling, front side and back side pile warps and 1st and 2nd ground warp end form a 2/1 rib weave with each other. 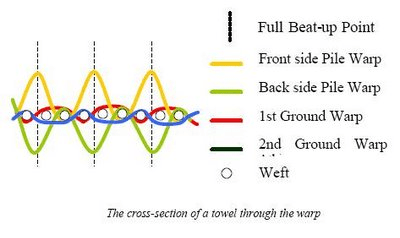 As is seen from the weave diagrams in Figures a and b, the shedding of the ground warps is not synchronized with that of the pile warps. By this, the number of interlacing throughout the warp increases, and this strengthens the fabric. As it has been mentioned before terry towels can have pile loops on one or both faces. Different types of terry weave which have piled on one face and both faces.

The picks used for towelling is between 15 and 25 picks/cm. And ends used are between 20 and 30 ends/cm. During the weaving of borders, the picks are increased 3 to 6 times the density in the pile areas Pile/ground ratio is described as the length of pile warp per unit length of fabric in the warp direction.

A practical way to find out this ratio is done by measuring a 10 cm length of towelling in the warp direction, then cut the pile warp from either end of the measured length and measure the total length of the removed pile end per 10 cm length of fabric. Pile warp length per 10 cm fabric is usually between 20-100 cm. This ratio has a direct effect on the fabric weight and thickness. As the ratio increases, the weight and the thickness of the terry fabric increases.