Reactive dyes most commonly used for dyeing tend to fall into one of the two broad categories.

The reactivity of these dye towards cellulose is so high that react with cellulose at room temperature or in the cold under alkaline condition and hence they are called cold brand or M-brand reactive dyes. They are generally recommended for dying than for printing.1

These dyes have low reactivity towards cellulose and require more severe conditions like higher temperature, 800C, and higher alkalinity of fixation. They are readily soluble in water at 80-850C. they are suitable for dyeing and printing on cellulose fibre materials and are called Hot brand or H-brand reactive dyes.4

These dyes are less reactive than cold brand reactive dye. H-brand is more stable for storage. However, they are to be buffered to slightly acidic pH to protect them from getting hydrolysed under alkaline condition.

Like M-brand dye, H-brand dye too gets hydrolysed under an alkaline condition for fixation and they too need through soaping after dyeing to remove most of the hydrolysed dye in order to ensure the optimum wash fastness of the dyeing lead to the polluting the dye house effluent with a considerable amount of hydrolysed dye.

Under the alkaline condition, sulphoethyl sulphone group which otherwise has no reactivity towards cellulose is covalent into vinyl sulphone group, which is the actual reactive group, reacts with the hydroxy group of cellulose forming another group connecting the dye and the cellulose. Here too a covalent bond is formed between two: 5 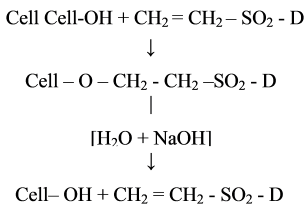 In this case, too, the vinyl sulphone form of the dye reacts with water under an alkaline condition in addition to the reaction with the cellulosic fibres. After dyeing the fibres with VS dyes, the hydrolysed dye which has no reactivity with and low affinity for cellulose fibres has to be removed from the dying by thoroughly soaping to get the optimum wash fastness. However, during soaping, a neutral non-ionic has to be used without any alkali. If the alkali is present in the soaping bath some amount of the dye, reactively dyed with the fibres come out in the soaping bath by the rupture of the covalent bond formed between the dye and the fiber, in case the VS reactive form of the dye is stripped, this may be lead to lightening of the shade extent in dying. 5

These dyes containing two triazinyl groups each containing one reactive chloro group are characterized by low affinities like M-brand and high exhaustion and fixation hence good build-up, washing-off of the dyed good is dye to be removed. This lead to less effluent problem since there are monochloro-s-triazine group, which are stability is good.

These dyes with bath chloro-triazine and sulphatoethyl sulphone groups in some dye molecules offer high all round fastness properties including perspiration, light and chlorine. These dyes have a high degree of exhaustion and fixation rates, better alkali stability and excellent levelling properties. Reproducible shades can be produced because of low sensitivity to temperature variation and to alkalinity.

These dyes have excellent storage stability. A very little amount of the dye gets hydrolysed and hence less washing off and effluent problem.

It should theoretically be possible to attain even greater fixation efficiency by incorporating addition-reactive group into the dye molecule. In practice, this approach can be counterproductive owing to the detrimental effect that additional groups can have on migration, leading to lower fixation, especially at heavier depths, and poor build-up. However several patent application relating to reactive dyes with three reactive groups have appeared. Also, some commercially successful dyes of this type are now available like CIBACRON Red C-2G and Remazol Red BS. In the case of trifunctional dyes possessing only one chromophore unit, the molecular weight contribution of the uncoloured reactive groups can be comparable to that of a chromophore.

Although the incorporation of three dissimilar reactive groups into a dye containing a single chromophore unit is clearly a less economic approach, the additional cont can sometimes be justified by exceptional technical properties.6

The increase in consumption of polyester cotton blend and the difficulties encountered in their colour ratio has been mentioned earlier. It is in this context that neutral and acid fixing reactive dye again significance.7

These dyes react with cellulose by high-temperature neutral exhaustion dyeing making addition necessary. The actual dye residue ultimately bound to the fibres is the same as the based on monochloro-s-trizinly dye. For acceptable commercial use of quaternised triazine dyes it is important to ensure that the small of mines or salt does not cause a problem during either syntheses or application, moreover, the amines should be environmentally acceptable and nontoxic.

The dye fixation can be achieved in a neutral pH dye with quaternised based is quite straight forward. When the dye bath pH has raised the ionization of cellulose increases thus increasing the change of reaction with cellulose. In neutral pH, this does not occur. However, the cationic nature of the quaternised group contributes to the attraction between cellulose anion and dye. The employment of higher temperature also increases the concentration of cellulose anion. The problem of diffusion due to large molecule size can be completely avoided by adjusting the pH to a lower value than used for ordinary reactive dyes and by dying at a higher temperature. The result will be an improvement in the penetration into the interior of the fibre and level dyeing will be obtained. Thus dyes are useful for polyester cotton blends in conjunction with a disperse dye. 8

These are two acid fixing groups as shown in the below.

The procion T dyes a range of liquid reactive dyes based on the phosphoric acid reactive group. Fixation of these takes place under acidic dyeing condition in the presence of carbodiimide at about 2000C.

Procion T dyes do not hydrolyze and of the end of the dyeing process retain the capacity for fixation. The disappointing fixation achieved under even the best condition recommended is through to be due to unfavourable competition from the carbodiimide side reaction.

High fixation value can be obtained by using solvents and cyanamide at 1600C. Steam fixation of phosphoric acid dye can be fixed on to cotton by steaming after padding and drying. Although some dye fixation is achieved by prolonged steaming at around 1200C, however, the fixation attained is too low to be of any significance, the dye fixation efficiency is very much greater which dicyandiamide is used and steaming done at 1800C.

Mono chlorotriazine dyes are condensed with amino group-containing molecule having a carboxylic group.

Although the dyeing system has all the advantages of acid fixing reactive dyes, the high concentration of cyanamide required as a co-reactant and the susceptibility of the ester cross-linkages, which bond the dye to the fabric, to hydrolysis during alkaline laundering are significant drawbacks.

Acid and neutral fixing reactive dyes are important for polyester-cotton blends and hence their consumption will increase which will lead to the synthesis of dyes having god properties and which react under these conditions.

Sumifix supra dyes, marketed by Sumitomo of Japan, are heterobifunctional reactive dyes having a vinyl sulphone and monochlorotriazine group. These dyes are known for their high degree of exhaustion and fixation, good reproducibility and levelling properties.13 These are also temperature insensitive between 500C to 600C. The dyes are distinguished by medium substantivity in primary exhaustion phase and a high degree of exhaustion and fixation after addition of alkali.

Kayacelan reacts dyes introduced by Nippon Kayaku of Japan,14 reactive with cellulose at 1300C at neutral pH. This has made the most suitable for one-bath, one-stage dyeing if PET/cotton blends. The leaving group in the best knows for the reduction in processing time, simplified dyeing processed and increased productivity.

Procilene N dyes introduced by ICI, are the combination of dispersal PC disperse dyes and Procion T reactive dyes for the one-stage printing of cellulose/PET blend. Procion N range is a combination of the matched shades from dispersal PC dyes and elected Procion T monochlorotriazinyl reactive dyes. These dyes are fixed to the Polyester/cellulose blend under an approximately neutral condition.

Procion HEXL15 dyes, introduced by ICI, are basically molecularly refined dyes of Procion HE type. These are known for better technical performance and characterized by their excellent levelness and shade reproduction ability.

Importance of a cutting room in garment manufacturing