Where Can You Study Fashion Design in the US?

This technology consists of using laser rays to project into the human body. Light sensors capture the measurements. A laser beam scans the consumer’s body in a fraction of a second. It is contact-free and does not have any health hazards. The scanner uses low power microwaves to illuminate the human body. These waves easily penetrate the clothing and reach the person’s body. To avoid offensiveness of the light beam only eye-safe lasers are used. The computer software then analyzes the high-resolution pictures of the human body and decides the exact tailoring measurements for that individual. Within seconds, hundreds of measurements are taken from head to toe to create the exact 3D data. The scan takes hundreds of individual measurements, despite only a few will be used when tailoring the garment.

Laser scanning technology consists of using lasers to project onto the human body one or more thin and sharp stripes. Simultaneously, light sensors acquire the scene and by applying simple geometrical rules the surface of the human body is measured. To assure the inoffensiveness of the light beam, only eye-safe lasers are used. Special optical systems and mirrors are used for the generation of stripes from a single laser light beam. The laser scanner unit, which is composed of the laser, the optical system and the light sensor, is moved across the human body to digitize the surface.

The type of movement and the number of employed units can vary depending on the human body part to be measured.

This system uses a white light-based scanner and measurement extraction software. Hundreds of images are captured and automatically accurate measurements are extracted through the software.

Different patterns are employed by the different manufactures. Figure 7 give some examples of possible variations of the Classic binary code.

What is the difference between white light body scanning and Laser scanning?

The major difference to laser scanning is that the acquisition happens in a very short time and that it results in the digitization of entire surface parts. Everything happens in a short time period (mostly under one second) so that human bodies can be digitized without problems: the uncontrolled movements of the person are not a problem.

This procedure has the disadvantage, that multiple units cannot be used simultaneously since they interfere with each other’s light patterns projections. Practically, this means, that multiple types of equipment have to be used serially. This implies again an extension of the acquisition time. 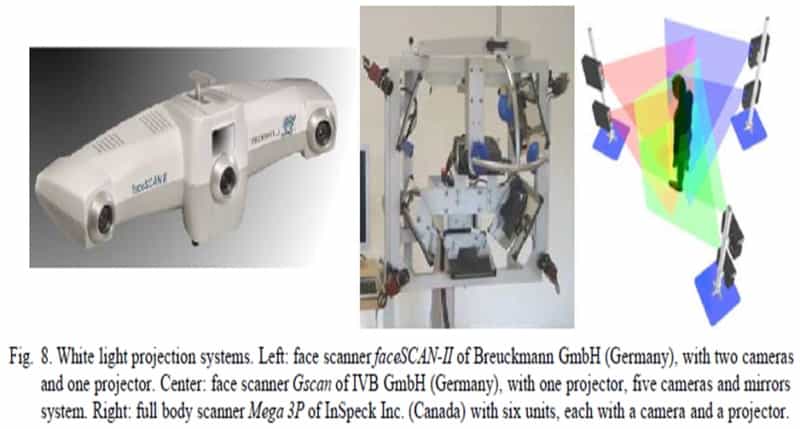 Combination of Modelling and Image Processing

In this process, 3D measurements are not used, but 2D images are used to extract and generate 3D information. Three images of the person, two from the front and one from the side in acquired, and measurements are calculated based on the body silhouette. They produced computer models that are very realistic. The big advantage of combining image processing and modelling techniques is that it is less expensive when compared to the other two ways of processing. Two examples are described to explain this technique:

In recent years, new technologies based on active sensors have been applied also for the measurement of the surface of the human body. A very interesting product resulted by applying cylindrical holographic imaging technology onto the human body, allowing to perform a whole-body scan while the person remains fully clothed.

In this case, the active sensor uses non-harmful, ultrahigh-frequency radio waves to obtain accurate body measurements. A millimetre-wave array/transceiver illuminates the human body with extremely low-powered millimetre waves. The radiation penetrates clothing and reflects off the body. The reflected signals are collected by the array/transceiver and analyzed by an image processing computer.

In fact, the 3D measurement method based on TOF is integrated into the CMOS sensor. Each pixel of the sensor is constructed to measure the phase difference between the emitted light source and the captured returning light. The result is real-time 3D images of the recorded scene. The actual CMOS technology limits the sensor size to about 25K pixels. For this reason, to time, these sensors can be exploited only for few applications regarding the human body, as for example in security (surveillance) or automotive(recognition of pedestrians).

Where Can You Study Fashion Design in the US?