The richness and diversity of India’s woven textiles are talked about for the last two thousand years in the global market. Foreigners, local travelers and writers have described the textures, quality and the designs of Indian fabrics in great detail.

Various kinds of looms are used in different regions in India. Apart from simple pit looms, frame looms and complex ‘jala’ looms, back-strap looms are also popular in North-Eastern states. Supplementary weft or warp or sometimes both of these are used to create interesting patterns to ornament the fabric.

Amongst the earliest woolen textiles are the ‘Kani’ shawls of Kashmir, woven with Pashmina goat fleece. Their sophisticated and sensitive designs were in high demand. These shawls were much sought after in Europe and by Indian royalty for its intricate twill tapestry weave.

Varanasi had an ancient tradition of weaving fine cotton fabrics, but is now world famous for the rich silks known as ‘Kinkhab’ and ‘Tanchoi’. ‘Kinkhab’ was a heavy gold or silver brocaded fabric, often used for robes or furnishing. The famous lightweight patterned fabrics ‘Jamdani’ was woven in Dhaka in Bengal, now in Bangladesh. These fabrics were so delicate and fine that they would be invisible on wet grass. Since 19th century, Varanasi weavers are also catering to local Tibetan market by providing satin woven ‘gyasar’ for the Buddhist monastries. The silk and ‘zari’ work brocade of lighter material were known as ‘pothans’ or ‘bafta’. The ‘amroo’ and ‘himroo’ were the brocades without any metal ‘zari’ work.

Gujarat was considered the main centre for silk and brocade weaving in India. Surat, Jamnagar and Ahmedabad were the other important weaving centres for brocades. 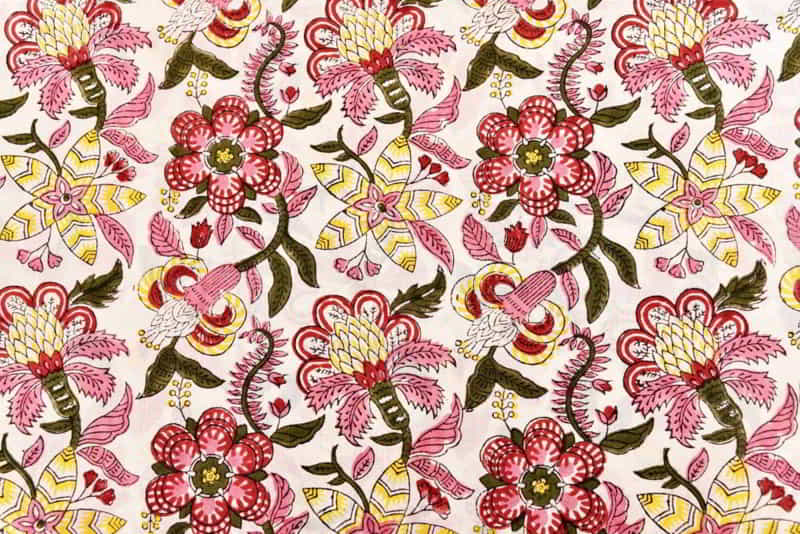 In the Deccan, the ‘Paithani’ weavers in Maharashtra used interlock tapestry technique to pattern the elaborate ornamentation. Down south, Arni and Dharmavaram produced rich coloured silk saris. Heavy Kanjeevaram saris are still an integral part of every Indian girl’s trousseau. They are made in silk and have motifs inspired by the temple architecture and sculptures of the region.

Murshidabad in Bengal acquired fame for its unique ‘Baluchari’ saris. These saris were elaborately brocaded with floss silk in strikingly pictorial ‘pallu’. These panels depicted courtly activities of Bengal Nawabs and landlords.

In most parts of India, weaving is done by men whereas in north eastern states only women weavers are seen doing intricate designs. The girls weave ‘gamocha’, a shoulder cloth, to give as a gift to elders in Assam. These are white in colour with red extra weft weave which makes stylized forms of birds, animals and geometric motifs. The traditional golden yellow Muga silk ‘Mekhala Chaddor’ is woven at Sualkuchi, Raha and Palasbiri. Tribal women in other north eastern states such as Manipur, Nagaland and Arunachal Pradesh weave beautiful fabrics on back-strap loom for the use of their family members.

Cotton weaving was done in almost all regions in India. Large number of towns and villages produced plain, checked and figured muslin. The most important centres were Dhaka in Bengal, Kota in Rajasthan, Chanderi and Maheshwar in Madhya Pradesh, Venkatagiri and Madurai in South India.

The fabrics were used as dhotis, saris, dupattas, pagaris, lungis, chadars and shirtings, as well as for furnishings such as quilts, bedspreads, rugs, khes and upholstery.

In addition to handlooms, the mill and the power loom sector has also contributed to the booming textile Industry. But the tradition of handloom cloth manufacturing in India is still flourishing and is still very much appreciated by the younger generation and the visitors to the subcontinent.

Categorization of weaving styles on the basis of the end product