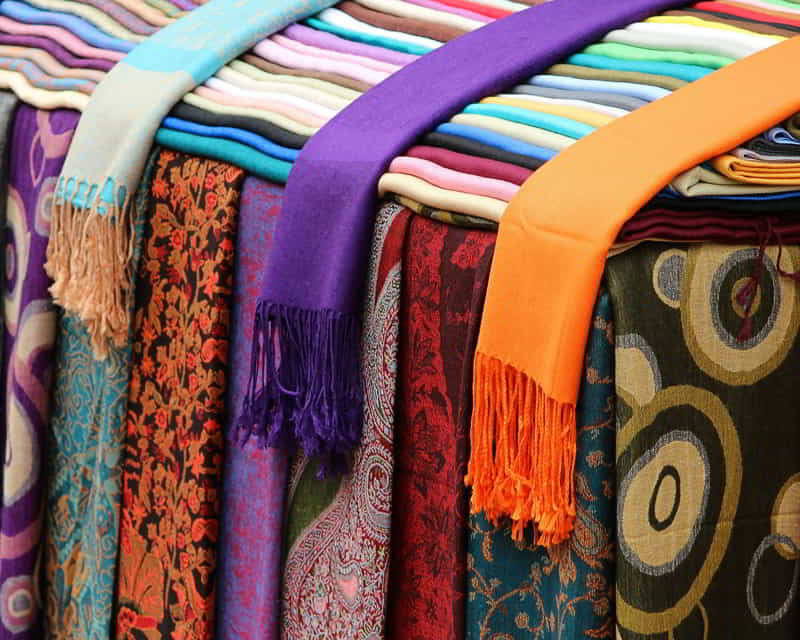 Kashmir also known as the paradise on earth is famous across the world for not only its natural beauty but also for the handicrafts made by the artisans. Among the handicraft products, the kashmiri shawls have remained as one of the most cherished acquisitions in the world since centuries. The English word ‘Shawl’ is derived from Persian word ‘Shal’, meaning a woven woollen fabric, which is draped across the shoulder to provide protection against the cold.

Origin: The Kashmir shawl industry developed over 300 years, through four different periods of political rule in India, viz the Mughals, Afghans, Sikhs and Dogras. As recorded in ‘Jaina Rajatarangini’, king Zain-ul-Abidin(1420-1470 A.D) was considered as the founder and chief patron of Kashmir shawls. He taught this art of shawl making to the people of Kashmir by getting experts from Turkistan. Since then, this art is being transferred from generation to generation in order to preserve the rich heritage.

During the reign of great Mughal Emperor Akbar, miniature paintings and portraits show the emperor wearing robes and gowns made of Kani shawl, giving evidence towards his being the great admirer of the art. He encouraged the weavers to try new motifs, and also started the fashion of the twin shawl, where two identical shawls were sewn back to back, hiding the rough edges of tapestry weave, and giving the impression of a single, reversible shawl.

Region: Three districts of Kashmir valley, viz Srinagar, Ganderbal and Budgaon are famous for pashmina shawl making. Other areas include Kanihama, Batpora, and Manzhama villages on the outskirts of Srinagar where majority of people are associated with weaving of Kani Shawl.

Raw Material: Shawl is prepared from material like woollen fleece, Pashmina, Shatoosh and Angora wool etc. Pashmina considered as the king of fibres derived its name from Persian word, Pashm meaning soft gold. It is famous for its softness, warmth, fineness and desirable aesthetic value. It is obtained from the soft, downy underbelly fleece of a mountain goat called Capra hircus which the animal sheds on the high altitudes during summers. Fleece is sometimes imported from nomadic Khirgiz tribes and also from Yarkand and Khotan.

Technique: On the basis of production techniques, the Kashmir shawl can be categorized into two main types – the loom woven or Kani shawls and the needle embroidered or sozni shawls.

Wooden spools instead of shuttle known as Kani or ‘Tujis’ in kashmiri language meaning eyeless are used for weaving a Kani shawl on the loom. The Tujis interlock the respective color threads through disconnected weft technique as they complete each weft of the shawl with twill tapestry weave to create an intricate pattern. Weaving process is meticulously regulated by a coded pattern, known as the talim drawn by the naqqash for guidance of the weaver.

Artisans require tremendous skill, patience and unbelievable amount of concentration to create a marvellous piece of Kani shawl. Its a laborious and time consuming process with usage of nearly 1500 colours in a design, which makes it difficult for the artisan to weave beyond an inch a day. Two craftsmen working together on a loom takes one and a half to two years to complete an all-over Kani shawl. In some cases, the period of weaving even stretches to five long years, depending entirely on the intricacy of designs.

The shawl is also widely known as Jamawar and Shah Pasand as the king and nobility preferred buying it and got Jama or gowns made out of it.

Layouts: The body of the shawl is termed as matan while the borders are termed as hashiya.

Doshala: Shawls in pair sewn back to back, i.e. the under surfaces of the shawl were never seen.

Char bagan: Four pieces of different colors are neatly joined together with invisible stitches. Generally the central field of the shawl is embellished with a medallion of flowers in embroidery.

Dorukha: The pattern is woven and embroidered in such a manner that it appears same on both the sides of the shawl.

Chand dar: Moon shawl has round large pattern woven or embroidered in the centre.

No wild animals are depicted but hunting scenes known as ‘Shikargah’ are depicted in shawls for trade and commercial purposes.

End Use: The shawl or shoulder mantle has been in existence in India in a variety of forms since ancient times. It was worn and used as a warm protective garment against biting cold. Unrivalled for its light weight, in earlier times people folded these shawls into four folds and draped them. Now days they are generally worn as stoles without folds or are merely thrown over the shoulder.

Decline: As the Mughal kingdom began to collapse and Kashmir came under the Afghan rule, the shawl trade also began to focus increasingly on the west, while the Indian market went into decline.

During the regime of Afghan governor Haji Das Khan(1776-83), heavy taxes were imposed on the shawl weaving industry that forced the artisans out of their profession. The artisans and weavers were in miserable conditions and started shifting to nearby areas like Amritsar in Punjab, where time and again attempts were made to establish a successful shawl industry but all in vein. This gave rise to embroidered shawls known as amlikar, where the tax was paid just for plain woven shawl which was later embellished with embroidery by the artisans.

Contemporary Scenario: The world-famous Kashmiri ‘Kani’ shawl has been given a ‘Geographical Indicator’ (GI) status, which will not only provide legal protection but also help in prevention of shawls made in other regions of the world from carrying the ‘Kani’ shawl tag. The Kashmir Government has also sanctioned Rs 40.4 million to set up a laboratory to test the genuineness of a Kani shawl. The GI tag will also help the Kani shawl to regain its rightful place in domestic and global markets.

The Government has also allocated financial assistance to help the kani shawl weavers to purchase new looms or renovate and modernize their old handlooms.

Kullu and Kinnaur in Himachal Pradesh are also known for good quality woollen shawls. The traditional colours used for the base of the shawls are red, maroon, black, brown and off-white. Bright colours are inserted in extra weft on borders of the shawl. Geometric motifs inspired from nature are made into beautiful colourful borders.

Kinnauri shawls are known for their labour intensive skilful weaving. These shawls are heavily embellished with motifs and are treasured by the women of Himachal Pradesh. These are draped by the women in two peculiar ways. Heavy silver jewellery is then worn along with it to give it a festive look.

Textile weaving is done by women in each of these states. There are more than 38 tribes in North East of India, and each of them have there own distinctive design, colour combination and a different design for special occasions. The design and colour, which varies not only between the tribes but also sometimes between clans of the same tribe and between different villages, records the wearer’s position in society. Shawls and wraps were originally made of cotton and the use of wool came much later. The colors used were mainly black, dark blue, red and yellow.

The textile weaving is exclusively a female occupation in this part of the country. For domestic consumption a back strap portable loom is used by the female weavers.

Fabrics from Assam include the hand-woven fabrics of cotton, muga, pat (mulberry silk) and eri (wild silk). Muga has a natural golden texture, it is mildly warm and particularly suited for winters. Textiles include bedspreads, furnishing material, mekhala-chaddars, rihas (traditional garments used by the women), gamosas, shawls and saris. The patterns generally involve animals, human figures, flowers, birds and diamonds. The designs in Assam are symbolic of the different tribes and ethnic groups of the region.