Geotextiles are placed at the tension surface to strengthen the soil. Geotextiles are also used for sand dune armoring to protect upland coastal property from storm surge, wave action, and flooding. 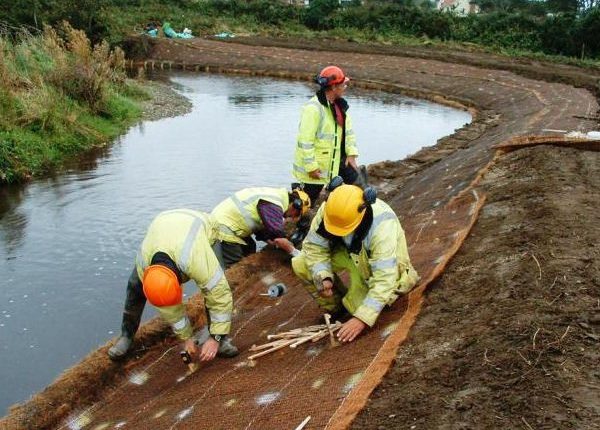 Prior to 1988, geotextiles was called plastic filler cloth or filter fabric. Because of the increase in the number of products being manufactured to be used as filter cloth, the specifications were revised. This material is now identified as Geotextile.

Geotextiles, an emerging field in the civil/construction engineering and other fields, offer great potential to utilize these fabrics in different areas of applications globally. Geotextiles are proving to be more cost-effective to traditional road construction methods. Fabric made are Woven, needle punched, heat bonded, Non-Woven, integrated loops or tufted loops Geotextiles are robust, permeable and durable fabrics. These fabrics have the ability to separate, filter, reinforce, protect, or drain and is designed to increase soil stabilization and ground support in a given location. Typically made from polypropylene or polyester or jute fibers/yarns. These geotextiles are high in strength to allow for maximum slope support, stabilization and erosion control. Geo fabric options include a felt-like nonwoven fabric as well as a woven polypropylene, synthetic or jute geotextile. Furthermore, the design of a geotextile is of paramount importance for any civil engineering application.

Geotextile composites have been developed and introduced products such Geotextiles, Geogrids, geonets, geomembrane, geosynthetic clay liners, geo pipes and geocomposites can yield benefits in geotechnical and environmental engineering design. Geotextiles and related products. Mostly geotextiles are placed at the tension surface to strengthen the soil. A large sand-filled container (SFC) within the dune system prevents storm erosion from proceeding beyond the SFC. Using a sloped unit rather than a single tube eliminates damaging scour.

Use this chart to determine which type and weight of geotextile are best for your project.

The characteristics of geotextiles are broadly classified as:

When using geotextiles, consider the following.