Air jet spinning has offered yarn manufacturers the opportunity to produce yarn at relatively high production rate. Unlike other spinning methods in which productivity is limited by the amount of twist in the yarn, Air Jet yarns can be produced at the same production rate regardless of yarn counts. Murata Vortex Spinners are one such leading Air Jet spinning machines which excel at producing finer yarns (Ne 40/1-60/1), because of the improved strength imparted to the smaller fibre bundle.

What is Air-Jet Spinning?

Air-jet spinning is a pneumatic method which consists of passing a drafted strand of fibers through one or two fluid nozzles located between the front roller of a drafting system and a take up a device.Look at the figure which demonstrates the Murata principle of producing fasciated yarns with two nozzles N1 and N2. This has been shown to be superior to methods employing a single nozzle to spin the yarn.

The drafting system S drafts the input material into a ribbon-like form with parallel fibers.Air is injected into the two nozzles N1 and N2 at high pressures, which cause swirling air streams in opposite directions.

Sliver is fed into the machine and is further drawn out to the final count and twist is inserted by means of a rotating vortex of high pressured air. The resultant yarn is cleared of any defects and wound onto packages ready for use in fabric formation.

Some fibers, particularly those at the edges of the ribbon, will not be subjected to the full twisting action imparted to the main body of fibers by the downstream air-jet. Hence they receive less twist than those fibers in the main bundle. When the yarn gets untwisted in the downstream of the twister, the low twist edge fibers get untwisted to a greater degree than their original twist. Therefore they are given a true twist in the direction opposite to that of the upstream twist.

The main body of the strand will be untwisted into parallel fibers, forming the core and these will be wrapped around by the edge fibers forming the wrapper fiber layer or the sheath, thus forming a fasciated yarn.

The tensile strength is lower than that of rotor and ring yarns. More wrapping turns give better yarn strength, but at the same time, higher wrapping frequency leads to higher bending rigidity and lower compressive softness.

The untwisted core fibers contribute to the very low snarling tendency of the air-jet spun yarns. Surface fibers twisted lightly around the core cause the yarn to be well suited for use as filling in air-jet weaving machines, as it can be propelled across the shed more quickly. The lack of twist in the air-jet yarn core is believed to contribute to the low pilling propensity of these yarns.

The pills can still be created from abrasion, but they are not locked into the structure because of the absence of the twist. Pills break away easily after they are formed. Also, it has been shown that as the number of the core fibers increases, the proportion of the protruding fibers is reduced, resulting in lower yarn hairiness.

As is the case with rotor spun yarns, air jet yarns are more even, but weaker and have a harsher feel than ring spun yarns. Air jet spun yarns are mainly produced in the medium count (30 Ne, 20 tex) range and are mainly polyester/cotton blended yarns. End uses include woven sheeting and knitted lightweight shirting. 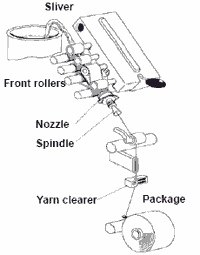 The basic requirement of a successful spinning machine for fasciated yarns includes a good drafting system, false twisting device, a take-up unit and the most important is the ability to afford some control over the quantity and distribution of wrapper fibers created on the yarn surface since this ultimately controls the yarn quality.

This was a major deficient in the previous air-jet spinning machines like Dupont which achieved a little commercial success.

Murata Vortex Spinning (MVS) technology uses more than two air-jets to create a 3-dimensional air vortex and addresses some of the issues faced by earlier versions of air-jet spinning systems. Thus changing the system from 2 dimensional to 3-dimensional offers a significant increase in the number of wrapper fibers by creating more edge fibers. Not only this, the fiber wrapping lengths also seems to have increased providing higher tenacity.

The vortex spun yarn shows a two-part structure if small portions of the yarn are untwisted. The amount of untwisting required revealing the yarn structure varies considerably along the length of the yarn.

Air-jet spinning has offered yarn manufacturers the opportunity to produce yarn at relatively high production rates. Some of the obstacles for the earlier generations of air-jet machinery included difficulty to make 100% cotton yarns and the generally harsh hand of the fabrics produced from them. Yarns are smoother to the touch because of the absence of “wrapper” fibers and improved fiber alignment.

The technology is not suitable for spinning yarn counts coarser than Ne 12/1. Compared to ring yarns made from the same fiber properties, the primary drawback of yarns produced by the air-jet system relates primarily to their lower tenacity. It is also important to note that the system removes significant amounts of short fiber during the spinning process.

Waste percentages typically range from 3-8%, depending on whether combed or carded cotton is being used. The removal of short fiber improves the yarn’s total imperfections and resultant fabric appearance/sheen. In addition, air-jet yarns can be made with varying levels of hairiness that can directly influence the fabric’s hand/softness while maintaining excellent resistance to pilling and abrasion.