Viscose Fibers - fibers made by chemical treatment of natural cellulose

The accessibility of raw materials and the low cost of the chemical reagents, as well as the satisfactory textile properties and broad possibilities for modification, ensure that viscose fibers are economical to produce and widely used.

The first ten years of the 21st century have witnessed a resurgence in the global viscose fiber industry as production has continued to increase, following a trend first evident in only some regions of the world during the latter part of the 1900s.

In the late 20th century, however, the regional upward trend, which was driven by the developing industry in Asia, was masked by the more significant and frequent closure of older, less environmentally friendly plants in the western world, particularly in Eastern Europe. Now, at the end of the first decade in the 21st century with that program of plant closures effectively finished, the previously obscured underlying trend has become clear (Figure 1).

The net result of the two opposing trends in Asia and East Europe towards the end of the 20th century was an overall net decrease in global manufacturing capacity of around 600 kt, to approximately 2.0 million tones by the year 2000. During this time, more than 800 kt of capacity was lost in Eastern Europe with a further 300 kt closing in West Europe and other smaller losses recorded in Japan and North America.

However, at the same time capacity in China was increasing by more than 400 kt with a similar increase occurring in South and Southeast Asia. So, whilst the global headline figure was suggesting a decline in capacity with all the connotations of an industry in terminal decline and the associated negative public perception, a closer examination of the situation revealed an industry which far from dying was, in reality, growing significantly, particularly in Asia.

By the end of the first decade of the 21st century, closures of viscose staple plants had slowed almost to zero and the underlying growth pattern had become much clearer. In fact, during the first ten years of the 21st-century global viscose staple capacity increased by around 1.5 million tonnes (an average of 7.7 % per annum) to more than 3.5 million tonnes, an all-time record high. At the same time, production of viscose staples also increased, albeit at the more modest average pace, of 6.7 % per annum.   Increased capacity in the industry was driven by the strengthening global demand for viscose staples, not only in textile

applications concentrated mostly in Asia but also in the more technically demanding and fast-expanding nonwovens industry concentrated in the West where viscose staple is the preferred fiber in many applications including wet wipes, hygiene products, and surgical applications. Thus, long gone is the once-popular perception that viscose staple is a cheap filler fiber to be found only in budget-priced apparel. It is now in demand for the positive contribution it makes to the finished product whether that be in the more traditional textile industry or in nonwoven applications.

Indeed, the old textile mills of Eastern Europe which traditionally produced large quantities of low-grade textile materials mainly for domestic consumption have long since given way to the new highly automated and in many cases vertically integrated textile conglomerates located chiefly in Asia. It is no surprise therefore that high-grade fiber-making capacity has migrated to those markets where the textile industry has been growing fastest.

Whilst the rapid increase in capacity has been taking place in Asia, viscose staple producers in the West have taken stock and become stronger and better able to cope with competition from the newer low-cost producers. Today many of the remaining producers outside Asia are reaping the benefits of decisions taken in the latter part of the 20th century to move production away from commodities towards specialty products. The continuing trend towards research-driven developments of new fiber variants offering a wide range of properties to the marketplace is set to continue indeed survival of the industry in West Europe and elsewhere depending on an innovative approach. Never has the saying been truer than it is now today’s specialty is tomorrow’s commodity.

What is Viscose Staple Fibers

Depending upon the intended use, viscose fibers are made into textile or cord threads, as well as staple fiber. The manufacturing process is composed of the following basic technological operations:

Fabrics of viscose fibers are easily dyed and have excellent hygienic properties (hygroscopicity), which is especially important in goods made for popular use. The accessibility of raw materials and the low cost of the chemical reagents, as well as the satisfactory textile properties and broad possibilities for modification, ensure that viscose fibers are economical to produce and widely used.

In the manufacture of popular goods, viscose fibers are widely used for treating silk and staple fabrics, knitted goods, and fabrics for various uses made from combinations of viscose fibers with cotton or wool, as well as with other synthetic fibers. Highly durable viscose cord fiber is used for a wide variety of technical goods. For example, replacing cotton cord in tires with highly durable viscose cord increases the life of the tire and decreases the amount of rubber needed for its manufacture. In 1968 world production of viscose fibers was 3,103,400 tons (42.6 percent of the general output of chemical fibers). Industrial production of viscose fibers began in England in 1905. 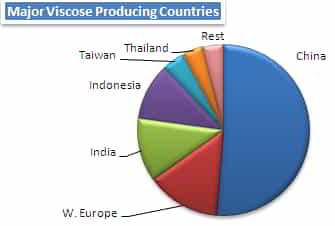 The process is as follows: 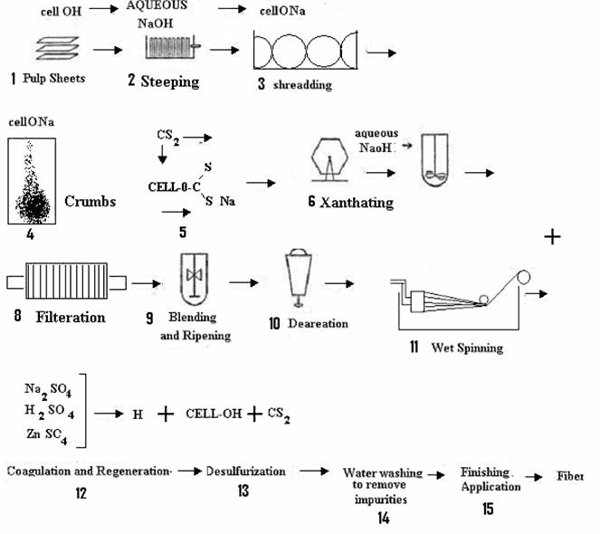 The viscose fiber industry is the oldest man-made fiber business in the world with its roots stretching back to the late 19th century, although commercial production did not begin until 1905 when Courtauld opened its first filament plant. Initially, the industry enjoyed a period of substantial growth which was followed by an equally dramatic decline in the face of competition from the newer synthetic fibers. However, in more recent times the industry has shown signs of recovery, driven primarily by the commissioning of new plants in Asia.

At the same time, some factories in the western world and elsewhere have struggled to compete, with many closing down and others running at reduced capacity utilization. This paper highlights developments in the latest chapter of the global viscose fiber industry by examining the regional changes that have taken place during the first ten years of the 21st century. It shows that far from being in decline, the viscose fiber business is in a healthy state with annual average growth rates exceeding many other fibers including polyester staples.

Viscose was the first man-made fiber introduced in textile production. Viscose has excellent properties that can be engineered and optimized for different textile and nonwoven applications.

The name was adopted in 1924, in preference to ‘artificial silk’, by the U.S. Dept. of Commerce and various commercial associations. As early as 1665 the English naturalist Robert Hooke had suggested the possibility of making artificial silk, but the first artificial textile fiber was produced in 1884 by a French scientist, Hilaire de Chardonnet, and was manufactured by him in 1889.

Unpopular at first because it was too lustrous and laundered poorly, it has been steadily improved. Cellulose, originally from cotton linters but now chiefly from wood pulp, washed, bleached, and pressed into sheets, is dissolved by chemicals, then forced under pressure through minute holes in a metal cap (spinneret), emerging as filaments that unite to form one continuous strand solidified by passage through a suitable liquid or warm air.

The spinning solution may be forced through a larger orifice or slit to produce a monofilament, a ribbon, or a sheet. Filaments are doubled and twisted into smooth, silk-like yarns or cut into staple lengths and spun. Spun rayon can be treated to simulate wool, linen, or cotton.