Certain qualities such as fineness, length, color, and appearance determine the end use and value of wool. Fineness largely determines whether the wool is used in a suit, sweater, blanket or in a pair of socks.

Certain qualities such as fineness, length, color, and appearance determine the end use and value of wool. Fineness the fiber diameter, or grade, and its distribution is one of the most important of these quality factors. Fineness largely determines whether the wool is used in a suit, sweater, blanket or in a pair of socks.

In general, grade refers to the average diameter or thickness of the fibers. Three systems of wool grading are commonly used in the United States: American or Blood system; the English or Spinning Count system; and the Micron system. All three systems are measures of average fiber diameter and can be related to each other. In actual practice, they are used interchangeably. 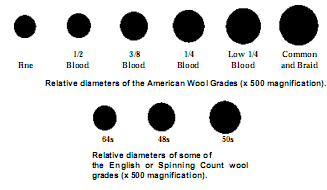 The American or Blood System

The American system of grading wool was developed in the early 1800s when the native coarse-wooled sheep were being bred to fine wooled Merino rams imported from Spain. It assumes that the offspring of the cross would have fleeces which were intermediate in fineness between the two parents. The wool grade is defined as the percentage of Merino blood carried by the sheep that typically would produce a particular fineness of wool. The grade or fiber diameter came to be expressed as fine, 1/2-blood, 3/8-blood, 1/4-blood, low 1/4-blood, common and braid. Today, these terms are not as exact as the trade would prefer, and the spread within a grade is too broad to suit the purposes of wool processors.

The English or Spinning Count System

The English system of grading wool provides narrower ranges and a more exact nomenclature than the American system. It uses a measurement called the “spinning count” and is based on the number of “hanks” of yarn which could be spun from one pound of clean wool on the equipment available at the time the system was developed.

As wool becomes finer, more hanks or yards of yarn can be spun from a pound of clean wool and the spinning count becomes larger. In theory, one pound of clean 62s spinning count wool could produce 62 hanks or 104,160 feet of yarn. (A hank of yarn is 560 yards in length.) Although wool is seldom spun to its maximum count, there is a limit to the number of fibers which will hold together in a yarn. The English or Spinning Count system of grading wool provides a numerical designation of fineness. English or Spinning Count grades of wool commonly used in the United States today are the 80s, 70s, 64s, 62s, 60s, 58s, 56s, 54s, 50s, 48s, 46s, 44s, 40s, and 36s.

Check out the yarn count calculator.

Increased emphasis on an exact and highly descriptive method of describing wool grade has produced a measuring system in which individual fibers are accurately measured. The unit of measure is the micron, which is one-millionth of a meter or 1/25,000 of an inch. Fineness is expressed as the mean fiber diameter. Eventually, this system will become the standard for describing wool in the United States.

Relationship Between the American, English and Micron Systems of Grading Wool