Fashion sketching not only involves the act of drawing an initial idea but also the process of considering and developing the idea across the pages of a sketchbook. It is always best to have an idea of what you want to draw. In many respects a fashion sketch is a problem-solving process, which brings together the visual elements of articulating an idea in its purest form. This can mean recording a sudden idea before it is lost or forgotten, or capturing a moment in time, such as observing a deta

A fashion sketch should seek to record and make sense of an idea. This is largely achieved with any one or more of three components:

Some sketches may appear spontaneous or similar to mark making but they should all be linked by a common understanding of the human form and an end use. (Mark making is a general term used to describe a variety of lines and marks that may be applied by different media to enhance or add an expressive quality to a drawing. In fashion drawing it is synonymous with line quality.)

Graphite or drawing pencils are ideal for shading and creating variations of the line quality. While this is a good way to get started, it is also well worth developing the confidence to sketch with a pen. Sketching in pen requires a more linear approach to drawing, which can often enhance the clarity of a design idea, and it is no less spontaneous than using pencil, as Lovisa Burfitt’s work clearly demonstrates. 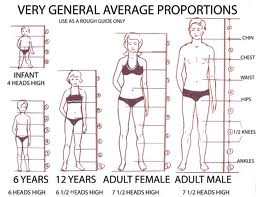 The proportions of a fashion figure are often exaggerated and stylised, particularly for womenswear drawings. This can sometimes be slightly confusing to the untrained eye but in fashion terms, it represents a statement of an ideal rather than an actual body shape. This ideal is then aligned to a contemporary look that is viewed through the visual lens of fashion.

Since the late 1960s and 1970s exaggerated proportions have generally prevailed and continue to exert an artistic influence over most fashion drawings. Most standing fashion figures are proportioned between nine and ten heads in height (if the figure’s head is arranged vertically on the page alongside the complete standing figure). Most of the additional height is gained through the legs, with some added to the neck and a little added to the torso above the natural waist. Most women in the real world stand around 5ft 5in or 5ft 6in, but a fashion figure needs to project greater height in order to better show off the clothes and communicate the look to an audience, usually through exaggerated gestural poses. Of course, a woman who might be 5ft 2in could be proportioned the same as a woman standing 5ft 10in but for fashion purposes neither would offer the desired ideal proportions for communicating the look. When drawing the fashion figure the look might refer to the prevailing styles of the season, such as the position of the fashion waist, or it may be an exploration of voluminous or contoured clothing styles with reference to influences from a particularly favored model or celebrity.

There are fundamental differences between the fashion proportions for drawing men and women. Women’s fashion proportions are mostly concerned with extending height through the legs and neck, with the resulting drawings taking on a sinuous and gently curved appearance. For men, the drawing approach is altogether more angular.