Warp knitting is the sequential formation and interlinking of loops in an axial direction on a lateral array of needles with at least one separate thread being supplied to each needle. The loops are joined together in a width-wise direction by moving the threads back and forth between adjacent needles. 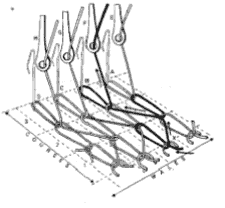 Warp knitting represents the fastest method of producing fabric from yarns. Warp knitting differs from weft knitting in that each needle loops its own thread. The needles produce parallel rows of loops simultaneously that are interlocked in a zigzag pattern. The fabric is produced in sheet or flat form using one or more sets of warp yarns. The yarns are fed from warp beams to a row of needles extending across the width of the machine. Two common types of warp knitting machines are the Tricot and Raschel machines. Raschel machines are useful because they can process all yarn types in all forms (filament, staple, combed, carded, etc.). Warp knitting can also be used to make pile fabrics often used for upholstery. 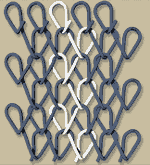 Warp knitting is defined as a stitch forming process in which the yarns are supplied to the knitting zone parallel to the selvedge of the fabric, i.e. in the direction of the wales. In warp knitting, every knitting needle is supplied with at least one separate yarn. In order to connect the stitches to form a fabric, the yarns are deflected laterally between the needles. In this manner, a knitting needle often draws the new yarn loop through the knitted loop formed by another end of the yarn in the previous knitting cycle.

A warp knitted structure is made up of two parts. The first is the stitch itself, which is formed by wrapping the yarn around the needle and drawing it through the previously knitted loop. This wrapping of the yarn is called an overlap. The diagram shows the path taken by the eyelet of one yarn guide traveling through the needle line, making a lateral overlap (shog) and making a return swing. This movement wraps the yarn around the needle ready for the knock-over displacement.

Movement around a knitting needle

The second part of stitch formation is the length of yarn linking together the stitches and this is termed the underlap, which is formed by the lateral movement of the yarns across the needles.

The length of the underlap also influences the fabric weight. When knitting with a longer underlap, more yarn has to be supplied to the knitting needles. The underlap crosses and covers more wales on its way, with the result that the fabric becomes heavier, thicker and denser. Since the underlap is connected to the root of the stitch, it causes a lateral displacement in the root of the stitch due to the warp tension. The reciprocating movements of the yarn, therefore, cause the stitch of each knitted course to incline in the same direction, alternately to the left and to the right.

In order to control both the lateral and longitudinal properties, as well as to produce an improved fabric appearance with erect loops, the second set of yarns is usually employed. The second set is usually moved in the opposite direction to the first in order to help balance the lateral forces on the needles. The length of the underlap need not necessarily be the same for both sets of yarns.

Raw materials for the production of nonwovens