The weft stop motion controls the correct insertion of the weft into the shed. Warp and weft stop motions will stop the loom most immediately when a warp end or a pick breaks off. It avoids the faults disturbing the fabric surface. It helps not degrading the fabric quality. The feeders are supplied together with various outfits and adjustment possibilities, which vary according to the yarn type and count and to the insertion system used. 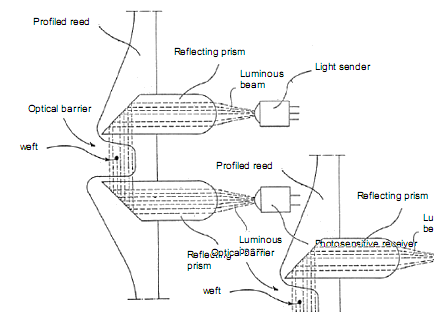 The weft stop motion controls the correct insertion of the weft into the shed, that is whether the weft has broken or been too short to reach the opposite end of the shed (short weft). In the case of rapier and projectile weaving machines, the most used device is provided with piezoelectric crystals. These crystals have a double quality: if an electric charge passes through them, they vibrate, or vice versa if they are made vibrate, they produce a light electric charge. This second property is used for the weft insertion control. This device, if it detects a correctly inserted weft, produces a light electric charge. As this signal is too weak, it is first amplified and then controlled against a sample signal: if the signal corresponds, nothing happens.

Otherwise, the absence of the charge is interpreted as a broken weft and the weaving machine stops. At this point, the automatic pick finding device enters into action and brings the machine back to the shed where the fault occurred. In this connection, you must consider that, although the stop signal is given quite quickly, a certain technical time for stopping the loom is required. During this time, although the weft presenting device is standing, the loom moves forward with some strokes which are compensated recovering tension and space through the reverse running of the evener rollers.

In the case of fluid jet machines, it is preferable not to hinder the weft fly, therefore optical sensors are used which do not touch the weft. As already mentioned, in the case of the air jet machines (at the moment only for them) there is a device which permits to restore automatically the broken weft and to start the loom. This mechanism permits to go on weaving if the problem takes place inside the shed. However, if defects take place in the pre-winding drum or between this and the cone, it is appropriate to have on board the machine the device which permits to select automatically the cone being processed. This system enables to bypass the pre-winding drum which has problems and to select a reserve drum which is standing until that moment. The machine does not need long stops and the operator can intervene easily to remedy the problem. Should the same fault take place again on the new pre-winding drum, this will be excluded in favor of the first drum.

The optical sensors are primarily infrared photocells suited to detect the presence of the thread or the quantity of thread accumulated in a prefixed zone. An example of these devices is the sensor for weft control on air-jet weaving machines, which is briefly described in the following.

This device, which is designed to control the correct weft insertion into the shed of an air jet loom, has the task of stopping the machine in case of incorrect insertion. The sensor is placed on the shaped reed at the desired height in the zone of weft arrival; it reads the presence of the thread when its front free end arrives in the sensor’s measuring range and crosses it.

The two photo-elements are opposing as schematically indicated in Fig. 109 and constitute an optical barrier which is disturbed by the weft thread when it is crossed by this thread.

In the case of air jet machines for staple yarn weaving, an optoelectronic weft stop motion in twin arrangement can be delivered. While the first of the two weft stop motions serves as a support for the machine control, the second one records the weft threads broken in the shed or expelled.

The supervision of the warp threads is an essential factor for the fabric quality. The device used is called warp stop motion; it stops the running of the weaving machine at each thread breakage or even when the thread becomes slack, that is when the thread gets a tension level considerably below normal level (delicate fabrics).

The warp thread is passed into the bottom slit of a metallic drop wire, which this way is supported by the thread under tension. Through the top slit of the drop, the wire passes the contact rail composed of a U-shaped outside coating in stainless steel, of a strip of insulating material and of a flat conductive inside blade in nickel-plated copper, provided on the upper part with a toothing.

This is the latest solution proposed by the manufacturers of weaving machines.

This solution permits not only the quick finding of the broken thread by the weaver but allows also an automatic analysis of the warp stops through a data detection system.

Properties essential to make a Fiber