Physical properties of warp yarn are improved by incorporating oligomer resin into the yarn interior at the size box. These improvements yield benefits at each step of the fabric formation process from size box to the woven greige fabric. Warp sizing technology has been in a period of stagnation following the introduction of synthetic polymers into size formulations nearly 60 years ago. As noted in the following “Warp Sizing: A Brief History”, abrasion-resistant surface barriers may have reached optimum performance in sizing. 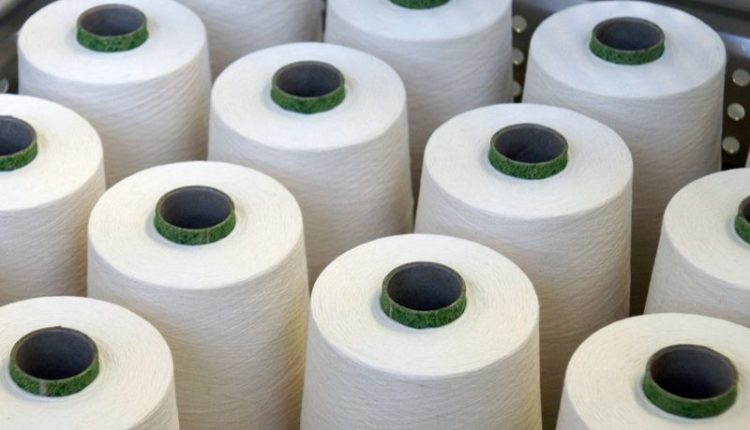 Around 1740, increases in woven fabric production were anticipated with the development of the mechanical loom. Optimism was quickly tempered by severe loom abrasion of machine direction yarn. Loom abrasion of yarn prevented any realistic production expectations to be achieved. This problem inspired the adoption of a concept from the coatings industry and a protective surface barrier was applied to machine direction yarn. Starch provided an economical and effective barrier film which could be easily removed from loom state fabric after weaving. Machines were soon developed to apply this barrier coating to yarn.

Following the introduction of synthetic fiber/cotton blends, poor adhesion of starch size formulations forced adoption of high molecular weight, and higher cost, synthetic polymers into warp size formulations. This was the last major change in warp sizing. The barrier concept has been refined to a point where it is now considered to be “the best that we can do”.  Synthetic polymer/starch blends are now the primary choice in spun yarn size formulations and warp sizing has now become an outlier in our industry. Thankfully, this attitude has not reached acceptance on either side of the size box.

More is involved in applying a barrier coating to warp yarn than a simple “painting process”. The slasher requires significant capital, large manufacturing space, continual preventative maintenance, and constant personnel training. Application of abrasion barrier and lubricant to warp yarn have been the sole function of the slasher.

Investigation of oligomer resins was initially proposed for potential adhesion improvement of high molecular weight polymer size films to yarn. All trials were performed in operating mills with no changes to established practices.  Results were very confusing. Evaluations with oligomer resins provided benefits far beyond any improvements in adhesion by the barrier film. Results did not fit into any logical interpretation which could be attributed solely to a surface barrier coating.  Every step in the process from size box through greige fabric demonstrated benefits. Oligomer resin technology appeared to be adding more than improving adhesion to the size film to the most important component of the entire process.

Fabric Care Market is anticipated to grow US$…

An article presented in this forum in 2019 provided a high magnification cross-section photomicrograph of 40’s Ne ring-spun cotton yarn. This cross-section photo illustrates the presence of micron size voids typical present between fibers in spun yarn. Empty spaces between fibers in spun yarns are determined by the limit of fiber cohesion and are stabilized by anionic repulsive forces on adjacent fiber surfaces.

As warp yarn enters the size formulation, water and oligomer resin are carried throughout the yarn bundle. Oligomer particles immediately are attracted to fiber surfaces and properties of the resin overwhelm any anionic character present.  Elimination of repulsive forces on fiber surfaces permits a more intimate fiber arrangement within the yarn bundle.  The result is a more compact substrate and the resulting increase in fiber cohesion within the yarn bundle.  Increases in fiber cohesion are reflected in the physical properties of the yarn substrate.

Improvements in physical properties of only the yarn itself cannot be measured directly in sized yarn.  Comparisons of hard yarn with and without oligomer resin provide useful data but do not rule out the barrier film as the basis of improvement. Two alternative methods were investigated to detect yarn changes resulting from oligomer resin. Addition of oligomer resin in the final rinse of a mock dye procedure provided improvements in both tensile and elongation.

A second approach was conducted to identify potential improvement in yarn properties by spraying oligomer resin directly on fiber. The test was conducted at the USDA facility in New Orleans, Louisiana. A 540 lb bale of Pima cotton (supplied by Buhler Yarns, Jefferson, GA) was crudely sprayed with 8 lb of a 15% active dispersion.  The treated cotton fiber was then processed through the USDA production unit to produce 30’s Ne ring spun yarn.  No processing problems were noted throughout the entire process. After spinning, control and treated yarns were sent to Gaston Textile Technologies in Belmont, NC for evaluation.

Treatment of yarn in mock dyeing and spray application of fiber with oligomer resins provide physical property data free from the interference of size film formers. Based on these results, a proposed mechanism has been constructed to explain improvements in sized yarn in the process from size box through the greige fabric.

Wet-out of yarn introduces both water and oligomer molecules throughout the warp yarn bundle. The adhesive nature and large numbers of oligomer resin are immediately attracted to fiber surfaces within the wet bundle. Resin molecules overwhelm any existing anionic character of fiber surfaces and neutralize repulsive forces maintaining empty spaces between fibers.

Neutralization of surface repulsive forces allows fibers to assume a more intimate structure in the yarn. This structure provides a more compact yarn bundle to host a forming barrier film.

Escaping moisture from wet yarn initiates barrier film formation at the surface of the wet yarn bundle while also promoting a closer attraction between fibers within the bundle.

Fiber cohesion increases as moisture continue to be removed from the yarn. Increased attraction and loss of repulsive forces between fiber surfaces promotes cohesion and stability in the more compact yarn.

Upon reaching the desired moisture content, the treated hard yarn sheet travels from the drying zone to the bust rods. Separation to individual hard yarn ruptures both surface and embedded film from yarn in the sheet.

Increased fiber cohesion in the interior of the yarn in the sized sheet offers more resistance to disruption as the size film is being ripped apart at the bust. Reduced disruption of sized fiber produces a smoother hard yarn and reduces both size and fiber shed at both the slasher and weave room. More fiber remains with final fabric.

Oligomer resins improve hard yarn uniformity. A more uniform-sized yarn has a reduced coefficient of variation in both tensile and elongation. Low-end improvement of tensile and elongation are especially apparent in the sized yarn. Failure at the low end of physical properties is logically the primary cause of warp breaks on the loom. A determination of proper resin level in the interior of sized yarn improves low-end values and reduce the coefficient of variation of the sized yarn.

Conventional desize procedures are not affected in fabrics produced with oligomer resins in warp size formulations. Compaction of the warp is the result of weak interaction between resin and fiber surface and is lost in desize and finishing.