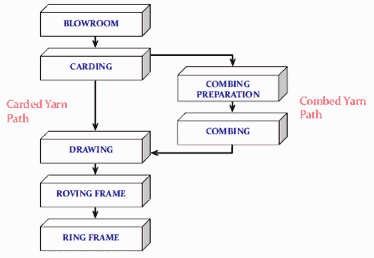 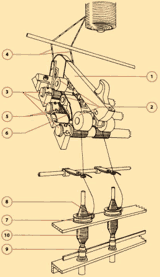 (1) A weighting arm
(2) presses three top rollers
(3) up to three bottom cylinders
(4) which rotate at different speeds. The first bottom cylinder and top roller rotate very slowly, the middle ones move 10 to 20% faster and the front bottom cylinder and top roller about 12 to 30 times faster, depending on the fiber material. Because of these different speeds and the loads on the top rollers, the raw material,
(5) which is fed into the drafting system, is drawn, and in case the thread becomes about 12 to 30 times thinner.The top rollers are coated with rubber cots to improve the clamping effect. Between the middle and the front roller, the fiber mass is guided between two small rubber belts
(6) the top and bottom aprons. The top apron is tensioned and guided by a top apron cradle
(7). Smooth and constant running of the aprons is very important to yarn quality.While leaving the last top roller and bottom cylinder of the drafting system, the fiber mass is given a twist by a metal ring
(8) with a rotating traveler
(9) and a rotating spindle
(10), which are located underneath the drafting system. The metal ring is the origin of the name of the ring spinning machine. The twist creates friction between the fibers by which the strength of the fiber mass increases. In this state, the fiber mass is now called yarn. The yarn is wound on to a bobbin attached to the spindle. The speed of the spindles amounts to 10,000 to 14,000 r/min for wool and about 18,000 to 25,000 r/min for cotton. Thus one meter of yarn contains between 300 and 2,000 twists. The weighting arm is required to allow different loads to be set on the top rollers. Normally this is achieved by helical springs which can be adjusted mechanically in steps.

Also, the distances between the rollers have to be adjustable. The distance has to be larger than the length of the longest fibers to avoid the situation where single fibers are torn between the clamping points of top rollers and bottom cylinders.

Merchandising of Men’s Shirt in Bangladesh – A Case Study