Linen, which is used for apparel and interior textiles, comes from the long, strong bast fibers that form in the outer portions of the flax stem.

Flax is a versatile crop that is grown throughout the world and in a variety of climates. The translation of its scientific name, ‘linen most useful’, aptly describes its versatility. Linen, which is used for apparel and interior textiles, comes from the long, strong bast fibers that form in the
outer portions of the flax stem.

Flax fibers also are used in industrial applications, eg,  composites, geo-textiles, insulation, and specialty papers. Flax seeds are the source of linseed oil, which has been widely used in paints, varnishes, cosmetics, and linoleum.

More recently, flax seeds are being recognized as a health food, with nutritional benefits from lignans and omega-3 fatty acids. Even the woody core tissue (shive), which is removed during cleaning of fiber, is used for particleboards and animal bedding. Linen, which is valued for comfort and its distinctive appearance, remains a favorite in the textile industry.

With the burgeoning interest in natural fibers for a variety of industrial uses, flax fibers provide the potential to supply these applications from diverse, nontraditional linen sources.

History and Status of Flax and Linen

Flax was reportedly known as far back as 8000–9000 years to inhabitants in the ancient seacoast regions of modern-day Denmark and Turkey. Flax as a major textile in ancient Egypt, however, is well documented and frequently referenced. While flax is considered to have been first cultivated in Egypt, there is speculation that the origins of the plant might have been
in other regions (eg, between the Baltic and the Caspian Sea), subsequently coming to Egypt via China or India. Egyptian shrouds used to wrap mummies have been reported to remain for ~7000 years. Notably, the high-quality linen from Tutankhamun’s tomb has survived ~3500 years. Linen along with wool were the primary fibers for Europe throughout the Middle Ages and the Renaissance, with flax fibers used extensively for clothing and a variety of other applications.

Structure and Chemistry of Flax

Bast fibers are produced in the outer regions of the stem between the outermost cuticle–epidermis layer and the innermost, woody tissues. Separated fibers and fiber bundles appear stiff and brittle in longitudinal views under the microscope. The structure of the stem is important in retting, which is the process of separating fiber and non-fiber fractions. Fibers vary in length with a position on the stem. Oval-shaped bundles indicate high-quality fiber, while irregularly shaped bundles indicate poor quality. A thin cambium layer separates fibers and core
tissues. These core tissues are comprised of lignified woody cells, which constitute the ‘shive’ fraction produced during fiber cleaning.

The stem cuticle of flax contains waxes, cutin, and aromatics. This structure serves as a barrier to protect plants from invading organisms and water loss. The cuticle closely covers the epidermis, and this relationship constitutes a rigid and formidable structure that influences the
ease of retting. During retting, microorganisms enter the stems through cracks and disruptions
in the cuticle, partially degrade tissues, and thereby separate the cuticle/epidermal barrier from the fibers. Incomplete degradation, ie, poor retting, leaves this protective barrier and fibers still attached and contributes to reduced fiber and yarn quality.

Flax fibers are primarily comprised of cellulose, but pectins, hemicellulose, and phenolic compounds also are present. Compared with cotton fibers, which typically contain ~95% cellulose, flax has a lower percentage of cellulose and more pectin and hemicellulose. For example, in retted ‘‘Ariane’’ flax glucose was the predominant sugar (650 mg/g dry wt.) followed by mannose (39.2 mg/g) and galactose (35.0 mg/g); rhamnose, xylose, arabinose, and uronic
acids were also present. In contrast to cotton, flax fibers stained with Oil Red, which indicates the presence of wax.

Flax can be grown for fiber or linseed. Flax is a temperate weather crop, generally cultivated in areas where the daily temperature remains <30°. Production of flax is environmentally friendly in that few chemicals are required for crop production.

In the traditional production of linen such as that practiced in Europe, flax plants are pulled from the soil, manually in early times and now with specialized equipment. Plants can be harvested by mowing when short flax fiber, rather than a long line of linen, is the objective. 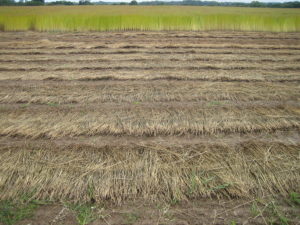 Retting, which is the separation or loosening of fiber bundles from nonfibrous tissues, is a major problem in processing flax. In retting, fiber bundles are separated from the cuticularized epidermis and the woody core cells and subdivided into smaller bundles and ultimate fibers. Under-retted flax results in coarser fibers heavily contaminated with shive and cuticular fragments, while over-retting can reduce fiber strength due to excessive thinning of bundles or microbial attack on fiber cellulose. Two primary methods for retting, namely water-retting and dew-retting, have been used traditionally over millennia to separate fibers for textile and other commercial applications.

In traditional linen production, mechanical cleaning follows retting to remove shive and cuticularized epidermis from the fiber. The first phase of cleaning breaks the stems by passage through fiuted rollers and then the scutching process beats and strokes the fiber to remove shive. Scutching mills clean long fiber by gripping the broken stems and beating first the top portion and then the lower portion with paddles or blades. As the long line flax is beaten,
a short fiber fraction, called tow, is removed along with contaminants and cleaned separately. Prior to breaking the stems, modern mills may align and carry out other processes to improve the efficiency of scutching. Maintenance of the integrity of the long fibers, which are to be spun into linen yarn, is maintained during the mechanical cleaning processes.

Scutched flax is then cleaned using a combing action called hackling, which removes smaller contaminants, disentangles and aligns the long fibers, and separates the bundles without destroying length.

For traditional long-line flax used in textiles, a number of factors are subjectively judged by experienced graders and include weight in hand, strength.

Linen has about a 2–3% share of the consumer textile market, compared with cotton at ~65%. Comfort, drape, and distinctive appearance, however, continue to command market share for linen. Emphases in the fashion industry will likely continue to dictate a periodicity in use and value of linen and flax fibers for textiles. Cotton and flax blends, both as intimate blends and with flax used as weft yarns, continue to be popular in the United States, which is a major importer.

The greatest total value of flax fiber in the future likely will be as cottonized fibers for distinctive textiles and as industrial fibers for nonwoven materials and composites. In textiles, the cottonized flax fibers are blended with cotton or other fibers and spun into yarns on advanced and efficient, short staple spinning equipment.

Cottonization of flax demands different methods of processing from traditional long-line flax, and any new retting procedure should take advantage of this opportunity. Flax and other natural fibers are in demand for reinforced composites, and the replacement of glass fiber with flax allows large savings in energy costs, provides advantages in the environment through biodegradability and offers opportunities for new, value-added crops in agriculture.

Commercially viable chemical- or enzyme-retting methods to improve the quality and consistency of flax fiber are needed to expand applications for flax fiber. Such methods, if made cost-efficient, could expand production beyond regions where weather now limits dew-retting. Important as well is the opportunity to employ enzymes to tailor properties for specific applications. Improved retting could take advantage of the vast amounts of seed flax straw as a by-product of the linseed industry available in Europe and North America.

Linseed straw, which is becoming an increasing environmental problem for disposal, likely would not surface for traditional long-line flax but could provide a value-added resource at the farm level for use in a wide range of composites and nonwoven materials.