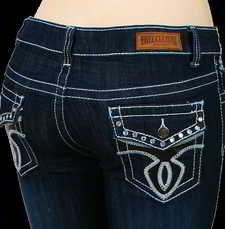 Rhinestone is a rock crystal stone, with an iridescent effect, and was first found around Rhine River on the German and Austrian border and thus got its name as Rhinestone. Initially, due to scarce availability, they were expensive.

In 1775, French jeweler George Frederic Strauss coated the lower portion of the stone with a metallic powder, which gave the rhinestones a sparkle and brilliance replacing diamonds for making low-cost jewelry but were still expensive due to the slow production method.

Rhinestones are also called Strass in many European languages. Mass production of Rhinestones started in 1892 when Daniel Swarovski, invented the machine that automatically cut the stones. Due to this, rhinestone availability was greatly increased and caused prices to fall and made them affordable.

In 1955, a thin vacuum-sputtered metallic coating was applied to crystal stones to produce an iridescent effect which tends to reflect whatever color is near it, and it is named after the Aurora Borealis atmospheric phenomenon, also known as the Northern Lights. Decorating fabrics with rhinestones can be a way to make clothing elegant, colorful and beautiful. It can add extra sparkle and help you create designs of your own.

How to fix rhinestones, studs, hotfix, and transfers

What are the different types of Rhine Stones?

These days artificial rhinestone is made from rock crystals, natural quartz, glass or acrylics like economic materials with vibrant colors, brilliant visual effects, and dazzling diamond-like feel, but they lack the fiery brilliance of the natural stones. Artificial rhinestones are in high demand because of price, sparkle, and brilliance.

Their faceted front and foil-covered flat back produce and exceptional brilliance bright sparkling colors. The most popular is Crystal, a clear colorless stone with a diamond-like sparkle. Another popular choice is AB (Aurora Borealis), a coating available on the crystal, and many colors, which as an iridescent, rainbow-like effect.

As far as shapes are concerned there are many choices for example triangle rhinestones, heart shape rhinestones, round shape rhinestones. All these shapes add more to the variety and elegance of rhinestones. Different people have different taste and according to their choice things are ordered and manufactured. Swarovski crystal is set to a brass tailored to give definite shape and authentic look.

What are the various sizes of Rhinestones?

The pearls were sized by which holes they fell through. PP is usually sued for smaller stones. SS (Stone Size) is the most current method of rhinestone sizing, although PP is still used. Some stones manufacturers mark the packaging both PP and SS size on the package label.

Rhinestones are used throughout the clothing and fashion industry on accessories to decorate everything from fingernails to cell phones. They are mostly applied or attached to fabric surfaces using glue, heat or metal settings.

For clothing and apparel industry flat-back rhinestones are mostly used using specific glue coating on the back of rhinestone stud and then placing this rhinestone on the desired surface and then heat pressing to permanently attach them to the fabric. This process must be followed strictly or otherwise the rhinestones will not stick properly to fabric and might fall off while wearing or washing. Never use any glue which is acetone based as they do not fit the purpose.

p>For garment decoration use of strands of Chips, Nuggets or Pebble is also quite common. These are used to make necklaces, Bracelets or earrings, Bigger chips or nuggets are also used in making a brooch or are used in embroidery decorations on Blouses or dresses. The beads are placed into the appropriate categories based on their average size. As with all chips, pebbles and nuggets, sizes and shapes vary. Description of various sizes and shapes is as below.

Dos’ and Don’ts while heat pressing rhinestones and studs

Pressing or Folding in Garment Manufacturing