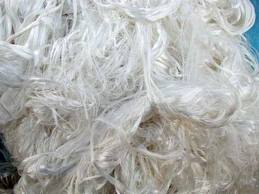 Different types of staples of different sizes and colors can be used to incorporate desirable properties, effects, and appearances.

The technique wraps fine continuous filament man-made fiber around a core of untwisted natural or man-made staple fiber to produce yarns in a wide range of counts.

This system passes a continuous Multifilament yarn together with staple fiber through a Pneumatic device which causes the filaments to twist and curl entrapping the staple fibers in the snarls.