In addition to the regular 45° twills, there are many other twill weaves that may be considered as subdivisions of regular twills; these are very useful in many classes of fabrics. The first of these weaves that will be considered are those known as fancy twills. These weaves generally consist of a regular twill weave between the twill lines of which are placed sometimes other twills running in the opposite direction, sometimes small spots, and sometimes other small weaves. The first step in making such weaves is to construct a bold line of twill running across the design, as shown in Fig. 33.

For instance, suppose that it is desired to make a fancy twill weave by inserting Fig. 37 between the twill lines of a 6 twill. Fig. 37 is complete on 6 picks, while the twill requires 8 picks; therefore, the completed fancy twill will require 24 picks, since 24 is the least common multiple of 6 and 8 and both will not commence repeating together until the twenty-fifth pick. Fig. 38 shows the fancy twill thus obtained. 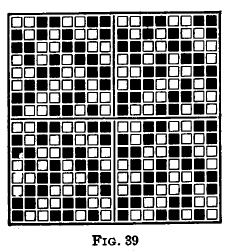 Entwining twills are constructed from regular twills by running sections of twill lines both to the right and to the left so that each section meets other sections at right angles. As their name indicates, the effects produced by these twills have an entwined or interlaced appearance; the more perfect ones are obtained when the separate sections are composed of equally flushed twills, although in some cases unequally flushed twills give good results.

Fig. 39 shows an entwining twill constructed by running two twill lines of the cassimere to the right and two to the left, the weave repeating on 8 ends and 8 picks. Although two repeats in the ends and two in the picks are shown here, when constructing these twills, the number of ends and picks that one repeat of the weave will occupy must be ascertained in the start. This may be found by multiplying the number of ends and picks require or one repeat weave used by the number of twill lines in each section; thus, since in Fig. 39 two twill lines of the cassimere, or %, twill are used, the completed entwining twill occupies 8 ends and 8 picks (2 >< 4 = 8). 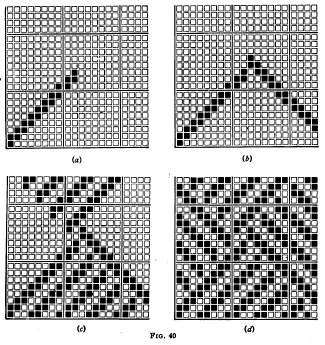 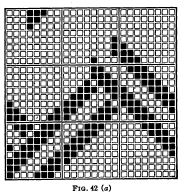 the entwining twill, it is usually advisable to add one or more extra risers to the ends of each warp twill line in order to make the twill lines meet each other better and also to shorten the warp floats on the back of the cloth at the junction of the right and left twill lines.

For instance, Fig. 41 (a) shows an entwining twill constructed with three lines of the 3/3 regular twill in each section, and while this weave is perfectly constructed, if one extra riser is added to each end of every twill line as shown in Fig 41(b), the weave will be enhanced in value.

It is very often necessary to alter the ends of each twill line, either by adding or by taking out risers in order to make each twill line meet others in the best possible manner; especially is this true in the case of entwining twills based on unequally flushed weaves. As the repeat of the weave is already determined, the addition of extra risers will not alter the number of ends and picks in the repeat nor the number of harnesses necessary to weave the design.

Why is Sustainable Fashion not yet Inclusive?