Selvedge is special hooked needle driven by a cam which produces, after cutting, the insertion of the protruding thread end into the subsequent shed, thus forming a stronger edge. The basic function of any selvedge is to lock the outside warp threads of a piece of cloth and so prevent fraying. The selvedge should be strong enough to withstand the strains of the center in the finishing process. – The selvedge should have a neat and uniform appearance. 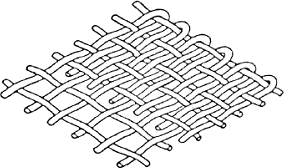 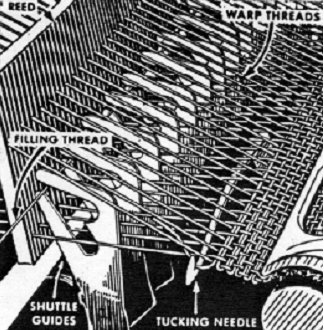 A special hooked needle driven by a cam produces, after cutting, the insertion of the protruding thread end into the subsequent shed, thus forming a stronger edge.

This system is generally used for light to middleweight fabrics when weave and fabric density permit. There are also available tuck-in selvedge motions which are entirely controlled by pneumatic or mixed pneumatic and mechanical devices. 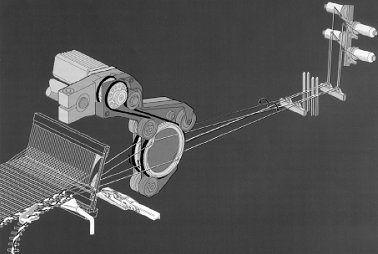 These selvedges are obtained by binding the wefts with strong additional threads working in gauze weave and by eliminating through cutting the protruding weft ends.

The leno gauze system is optimally suited for heavy fabrics, blankets, wall coverings. Fig. 116 illustrates the operation scheme of the device proposed by a manufacturer, in which device two complete leno gauze mechanisms work in combination. A leno device produces the fabric selvedge, while the other device forms the auxiliary selvedge.

These are obtained by pressing a hot mechanical element on the fabric edge; this method can be applied to fabrics in man-made fibers.

All these three systems allow the formation also of center or  ″split″ selvedges, when several lengths of cloth are woven on the same machine.