Skip twills are a type of broken twill effects formed by a skip drawing-in draft and a regular twill weave as a chain draft. The weaves that form a wave effects across the cloth known as pointed twills. These effects are also frequently spoken of as herring banes, or herring-bones stripes, because the radiating twill lines suggest the radiating bones of a fish’s backbone.

What are Skip Twills?

The draft is so constructed that when the harnesses are skipped, the end in the harness just before the skip will rise and fall exactly opposite to the next end; by this means a broken effect is formed in the cloth. In Fig. 45 (a) is shown a skip twill that is made with the 6—end regular twill 3/3, Fig. 45 (c), as a chain draft and the skip drawing-in draft shown in Fig. 45 (6). In this draft the first 3 ends are drawn straight; then 2 harnesses are skipped; 3 more ends are then drawn straight, and so on until a repeat is found.

What are Pointed Twills? 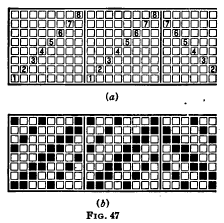 point drafts, which form wave effects across the cloth known as pointed twills. These effects are also frequently spoken of as herring banes, or herring-bones stripes because the radiating twill lines suggest the radiating bones of a fish’s backbone. Suppose that it is desired to make a pointed, or wave, effect with. the 45° twill shown in Fig. 46 (a) as the chain draft; Fig. 46 (b) shows the harness draft that will be used, while Fig. 46 (c) shows the effect obtained in the cloth. One important point in connection with point drafts is that they always end on the second harness and not on the first, that is, assuming that the draft begins on the first harness For instance, in Fig. 46 (b), the; ends are drawn straight for the first 8 harnesses, when they are reversed, commencing with the seventh harness; when the harness draft reaches the second harness after being reversed, one repeat of the draft is obtained.

If the last end of the draft were drawn through the First harness, the first and last ends of each repeat would work exactly alike, which would give in the cloth 2 ends side by side working alike. This would cause a serious defect in the fabric. If the weave is shown in Fig. 46 (c) is repeated two or three times in both ends and picks, a better idea of the waves formed by these weaves will be obtained. Many good effects can be obtained by this method by changing the harness draft and using the same chain draft. Thus, instead of using a regular point draft like that shown in Fig. 46 (6), a draft like that shown in Fig. 47 (a) may be used; the effect, or weave, in this case, will be similar to that shown in Fig. 47 (b).

The point twills thus far described will make waves across, or widthwise of, the cloth. The same effects,