Pattern making is a highly skilled technique which calls for technical ability, and a sensitivity to interpret a design with a practical understanding of garment construction. 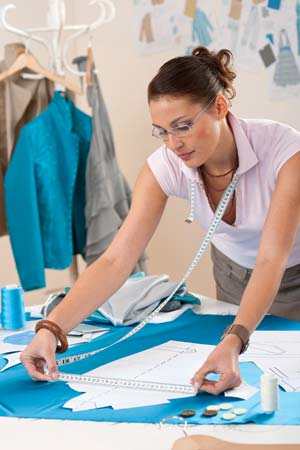 Pattern making is a highly skilled technique which calls for technical ability, and a sensitivity to interpret a design with a practical understanding of garment construction. For successful dress designing, patternmaking forms the fundamental step. This function connects design to production by producing paper templates for all components such as cloth, hemming, fusible etc. which have to be cut for completing a specific garment.

There are three methods of preparing patterns:

Is a two-dimensional basic method of preparing a paper pattern. The pattern is prepared on brown paper using personal measurements of the wearer. The garment prepared by this method fits exactly to the satisfaction of the wearer. It is economical to draft one’s own pattern. Also, changes in style can be made adopting the basic pattern.

This type of pattern can be constructed by drafting manually or produced by a computer which has been programmed to construct basic patterns according to given measurements and proportions.

Draping can be treated as one involving a detailed survey and study of the figure to build up a reliable fitting experience. Draping originally was called modeling. This was the original method of constructing garment patterns and is still widely used in the clothing design houses in Paris Draping is a free approach and is always to a certain extent experimental and cannot be described as a precise technique.

Modeling is done in a fitting room on a dress form with a stand. Dressforms vary in size. Generally, an averagely sized dress form of bust 88 cms or 92 cms is selected for this purpose. The designer works from a sketch or a mental picture and gives a 3-dimension form to an idea of a garment. The wrong side of the fabric is draped on the dress form or a figure. The effect of the fabric as it flows and drapes is readily visible on the dress form. Muslin cloth is used for draping. As the fabric is draped on the dress form pin, and mark the stitching line with a pencil. The muslin pattern which is the end product of draping is removed from the stand and each component is copied on to the paper pattern and necessary allowances are then added to give the design effect as planned by the designer.

These patterns provide fashions in current trend designed to fit certain sizes. It is available in tissue paper. These patterns indicate neck sizes for garments such as shirts, chest or bust measurements for children and women; waist, hip and length measurements for pants and skirts. Even to those with the ability and desire to design their own clothing, a commercial pattern makes a good starting point.

These patterns explain the steps in using the pattern and are mostly used by dress manufacturing companies. It also gives information on suitable fabrics, the quantity of material required, pattern layouts etc. Most figures differ considerably from the average. Uses of Paper Patterns:

Merchandising of Men’s Shirt in Bangladesh – A…