Rapier weaving machine delivers excellent fabric quality at the right price. Its flexibility, high level of user-friendliness and versatility make it an ideal means of production for weavers of fabrics. It is a shuttleless weaving loom in which the filling yarn is carried through the shed of warp yarns to the other side of the loom by finger-like carriers called rapiers. These machines are used for weaving textile articles such as shirting, dress material, furnishing.

The rapier weaving machines are the most flexible machines on the market. Their application
the range covers a wide variety of fabric styles. Their present weaving speed of about 600-700
strokes/min is the result of the use of a state-of-the-art construction technique, characterized by
the use of gear sets without plays and by minimum vibrations of the reed, the slay and the heald
frames.

The weft, which is under constant proper control, remains connected to the cloth as a consequence of the previous insertion (or it remains blocked under the temple in the other cases). At the right moment, the selection gear acts in a way, that the end of the weft is caught by the bearing rapier 1 mounted on a flexible tape or on a rod and at the same time is cut by shears on the selvedge side. The weft, after adequate braking, is transported to the center of the shed, where the bearing rapier meets the drawing rapier 2, which takes over the weft thread and, while holding it by its end, transports it back to the opposite side, where the rapier leaves it free, thus completing the insertion.

The weft exchange between the two rapiers in the middle of the shed can take place in two
different ways, that is: 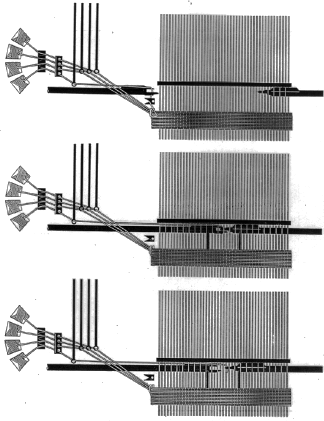