When did we start wearing clothes?

The first known humans to make clothing, Neanderthal man, survived from about 200,000 B.C.E. to about 30,000 B.C.E. During this time the earth’s temperature rose and fell dramatically, creating a series of ice ages throughout the northern areas of Europe and Asia where the Neanderthal man lived. With their compact, muscular bodies that conserved body heat, Neanderthals were well adapted to the cold climate of their day. But it was their large brain that served them best.

Neanderthal man learned to make crude but effective tools from stone. Tools such as spears and axes made Neanderthals strong hunters, and they hunted the hairy mammoths, bears, deer, musk oxen, and other mammals that shared their environment. At some point, Neanderthals learned how to use the thick, furry hides from these animals to keep themselves warm and dry. With this discovery, clothing was born.

The first known humans to make clothing, Neanderthal man, survived from about 200,000 B.C.E. to about 30,000 B.C.E. During this time the earth’s temperature rose and fell dramatically, creating a series of ice ages throughout the northern areas of Europe and Asia where the Neanderthal man lived.

With their compact, muscular bodies that conserved body heat, Neanderthals were well adapted to the cold climate of their day. But it was their large brain that served them best. Neanderthal man learned to make crude but effective tools from stone. Tools such as spears and axes made Neanderthals strong hunters, and they hunted the hairy mammoths, bears, deer, musk oxen, and other mammals that shared their environment. At some point, Neanderthals learned how to use the thick, furry hides from these animals to keep themselves warm and dry. With this discovery, clothing was born.

It is not certain when people first started wearing clothes, however, anthropologists give estimates that range between 100,000 to 500,000 years ago. The first clothes were made from natural elements: animal skin and furs, grasses and leaves, and bones and shells. Clothing was often draped or tied; however, simple needles made out of animal bone provide evidence of sewn leather and fur garments from at least 30,000 years ago.

When settled neolithic cultures discovered the advantages of woven fibres over animal hides, the making of cloth, drawing on basketry techniques, emerged as one of humankind’s fundamental technologies.

Cro-Magnon man considered the next stage in human development, emerged around forty thousand years ago and made advances in the clothing of the Neanderthals. The smarter Cro-Magnon people learned how to make fire and cook food, and they developed finer, more efficient tools. Sharp awls, or pointed tools, were used to punch small holes in animal skins, which were laced together with hiding string. In this way, they probably developed the earliest coverings for the body, legs, head, and feet. 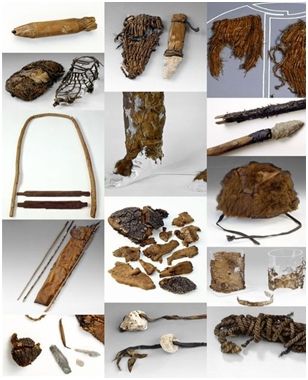 It is thought that the first assembled piece of clothing was the tunic. A tunic is made from two pieces of rectangular animal hidebound together on one short side with a hole left for the head. This rough garment was placed over the head and the stitched length lay on the shoulders, with the remainder hanging down. The arms stuck through the open sides, and the garment was either closed with a belt or additional ties were placed at the sides to hold the garment on the body. This tunic was the ancestor of the shirt.

One of the most important Cro-Magnon inventions was the needle. Needles were made out of slivers of animal bone; they were sharpened to a point at one end and had an eye at the other end. With a needle, Cro-Magnon man could sew carefully cut pieces of fur into better fitting garments.

Evidence suggests that Cro- Magnon people developed close-fitting pants and shirts that would protect them from the cold, as well as shawls, hoods, and long boots. Because they had not learned how to tan hides to soften them, the animal skin would have been stiff at first, but with repeated wearings, it would become very soft and comfortable. 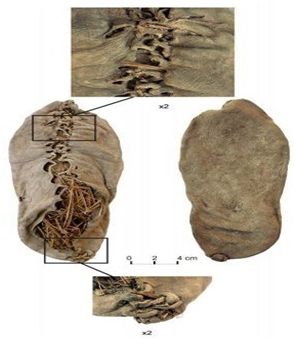 Much of what is known about early clothing is a patchwork of very little evidence and good guesses. Only fragments of very early clothing have survived, so archaeologists have relied on cave drawings, carved figures, and such things as the imprint of stitched together skins in a fossilized mud floor to develop their picture of early clothing. The discovery of the remains of a man who died 5,300 years ago in the mountains of Austria, near the border with Italy, helped confirm much of what these archaeologists had discovered. The body of this male hunter had been preserved in ice for over five thousand years, and many fragments of his clothing had survived.

Archaeologists pieced together his garments, and they found that the Iceman, as he became known, wore a complex outfit. Carefully sewn leggings covered his lower legs, and a thin leather loincloth was wrapped around his genitals and buttocks. Over his body, the man wore a long-sleeved fur coat that extended nearly to his knees. The coat was sewn from many pieces of fur, with the fur on the outside. It was likely held close by some form of a belt. On his feet the man wore animal hide short boots, stitched together with hiding and stuffed with grass, probably to keep his feet warm in the snow. On his head, the man wore a simple cap of thick fur. Though the Iceman discovered in Austria appeared much later than the earliest Cro-Magnon man, the way his clothing was made confirmed the basic techniques and materials of early clothing. The ravages of time have destroyed most direct evidence of the clothing of early man, however.

Hand and hand with the history of clothing goes the history of textiles. Humans had to invent weaving, spinning and other techniques and the machines needed to be able to make the fabrics used for clothing

Before sewing machines, nearly all clothing was local and hand-sewn, there were tailors and seamstresses in most towns that could make individual items of clothing for customers. After the sewing machine was invented, the ready-made clothing industry took off.

The word costume is derived from a Latin word “consuetudo”, which means a complete set of outer garments. Including, ornaments and hairstyle. Costumes were used not only to cover the body and embellish it they also constitute a significant non-verbal medium of communication that serves to establish the cultural identity of a person including a person’s community or country of origin at any given  historical period

The costume is the distinctive style of dress of an individual or group that reflects their class, gender, profession, ethnicity, nationality, activity or epoch.

The term also was traditionally used to describe typical appropriate clothing for certain activities, such as riding costume, swimming costume, dance costume, and evening costume. The appropriate and acceptable costume is subject to changes in fashion and local cultural norms. “But sable is worn more in carriages, lined with real lace over ivory satin, and worn over some smart costume suitable for an afternoon reception.”

This general usage has gradually been replaced by the terms “dress”, “attire” or “wear” and usage of “costume” has become more limited to unusual or out-of-date clothing and to attire intended to evoke a change in identities, such as theatrical, Halloween, and mascot costumes.

Before the advent of ready-to-wear apparel, clothing was made by hand. When made for commercial sale it was made, as late as the beginning of the 20th century, by “costumiers”, often women who ran businesses that met the demand for the complicated or intimate female costume, including millinery and corsetry.

THEORIES BEHIND THE ORIGIN OF CLOTHING

‘Clothes make the man’ is an old saying, which we accept as a without giving it much thought. Clothes not only ‘make the man’, but also affect the facial features and the body. Clothing takes the form of symbols used by individuals as a tool for social interaction. This forms non-verbal communication. Climate has obviously played an important role in determining the necessity for inventing the various kinds of clothing worn by humanity. The temperate zones are responsible for clothing which covers substantially the entire body. Clothing protects the wearer against, heat, cold and sandstorms.

CLOTHING IS CLASSIFIED INTO TWO CLASSES:

Concerning the origin of clothing, there are major 4 theories, these are:

Prehistoric people clothed their bodies over 75,000 years ago. This has been shown by the discoveries of ancient cave drawings, statues, and remains of materials used for making clothing. From the beginning, clothing has served the same basic human needs. Those needs are protection (a physical need), adornment and identification (psychological needs), and modesty and status (social needs).