The polyamide fibers include the nylons and the Aramid fibers. Both fiber types are formed from polymers of long-chain polyamides.

Synthetic man-made account for the largest part of the raw material used in manufacturing nonwoven bonded fabrics. In this group of synthetic nonwoven bonded fabrics, polyamide fibres are the not only the oldest ones used in production, but they also increase the serviceability of the product. This improved quality is of importance for various purposes, e.g.:

The polyamide fibres include the nylons and the aramid fibres. Both fibre types are formed from polymers of long-chain polyamides. The nylons generally are tough, strong, durable fibres useful in a wide range of textile applications.

A group of fully synthetic fibre materials, which are manufactured in a melt spinning process. Characteristics: highly elastic, tear and abrasion-free, low humidity absorption capability, fast drying, no loss of solidity in a wet condition, crease-free, rot and seawater proof.

In the middle of the 1930s nylon, a polyamide was brought to the market by the American chemical company DuPont. It was the first material fully obtained from basic chemical elements. A sure sign for the economic breakthrough of synthetic fine chemical fibres was the triumph of nylon stockings at the beginning of the 1950s.

The textile industry concentrated above all on space research and during the years of the Cold War on equipment for soldiers. At the end of this, the industry had to look for new sales markets.

During the last ten years, a series of new synthetic textiles and techniques for processing textiles have been developed, in which war and space technology has been matched with innovative novelties from design laboratories. A milestone: the active breathing microfibers (such as Gore-Tex).

Polyamide 6 is made from caprolactam and polyamide 6.6 from hexamethylenediamine and adipic acid. For fibre production, the resulting polyamide has to have the capacity to be spun into filaments, i.e.

These nylon polymers form strong, tough, and durable fibres useful in a wide variety of textile applications. The major differences in the fibres are that nylon 6,6 dyes lighter, has a higher melting point, and a slightly harsher hand than nylon 6.

The aramid polyamide fibres are formed from a long chain of synthetic polyamides in which at least 85% of the amide linkages are attached to aromatic rings. These essentially fully aromatic polyamides are characteristically high melting and have excellent property retention at high temperatures and excellent durability. They are unaffected by moisture and most chemicals and are inherently flame retardant. The fibres have high strength and can be used in a number of unique high-strength applications.

Common trade names for aramid fibres include Nomex and Kevlar (DuPont). Aramid fibres are extremely strong and heat resistant. Fabrics from the aramids have a high lustre with a fair hand and adequate draping properties.

The fibres are light yellow unless bleached and exhibit moderate moisture absorption characteristics. The fibres recover readily from stretching and bending deformation and are extremely abrasion resistant. They do tend to pill due to the high strength of the fibre.

Several other polyamides have been introduced for use as fibres in speciality applications where certain combinations of properties are desired. The major speciality nylons include Qiana, nylon 4, nylon 11, nylon 6,10, and biconstituent nylon-polyester. 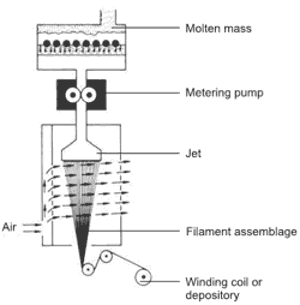 The molten mass is forced through the holes in the spinneret by pressure pumps and metering pumps, after which it is pulled off in the form of filaments. They cool rapidly in the (air) blasting chamber and are then either baled or wound onto bobbins at a constant speed.

The macromolecules are still randomly distributed in the filaments, which is why they are stretched so that molecules are more longitudinally oriented.

Once they have this orientation, the filaments take on their characteristic physical properties and can be cut to the lengths needed to make the fibres. Then the filaments of staples are prepared to ensure that they retain their processing properties.