Diagonal weave are basically type of twill weaves confined to bold twills running at angles greater than 45°, although often regular 45° twills are spoken of as diagonals; regular diagonals are generally formed by combining two regular 45° twills in their picks or ends.Diamond weaves are type of twill weave which forms the shape of a perfect diamond.

By reversing both the harness and chain drafts of any regular twill, another class of

weaves that is very largely used, and known as diamond weaves from the effects formed in the cloth, will result. Fig. 49 (a) shows a regular twill from which it is desired to construct a diamond weave.

First, build the chain draft by reversing the picks exactly as when forming waves lengthwise of the cloth. For the purpose of illustration, however, the picks will be reversed from the first pick, instead of from the last as in the previous illustration. It should be understood that in either case, the. weave will be the same. Fig. 49 (6) shows Fig. 49 (a) reversed in this manner. Fig. 49 (b) should be considered as the chain draft of the desired weave, while the drawing-in draft will be a regular point draft made on the same principle as the drawing-in drafts for the regular weaves that were made into waves extending across the cloth.

What is Diagonal weave? 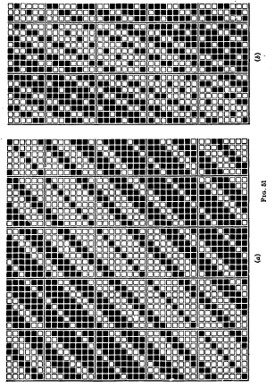 Shaded Diagonals-Diagonal weaves may be considered as a type of twill weaves, the

term is generally confined to bold twills running at angles greater than 45°, although often regular 45° twills are spoken of as diagonals; regular diagonals are generally formed by combining two regular 45° twills in their picks or ends. As the formation of other weaves by combining twills pick and pick or end and end has been fully explained, it will not be necessary to give further details of these weaves, but simply to state that all the examples under this method of forming weaves may be considered as diagonals. There is, however, a subdivision known as shaded diagonals, which are formed on a twill basis by taking as the base of the twill a different number of risers and sinkers in the different sections, grading from light to dark or from dark to light. For instance, suppose that a shaded diagonal is to be made from a regular 45° twill that is complete with 42 ends and 42 picks.

Divide the First pick of the weave into six sections of 7 ends each. Then beginning with the first section leave only 1 end down; that is, this part would be marked 6/1. In the next section leave 2 ends down, making this section 5/2. Continuing in this manner, the next section will be 4/3 the next section, 3/4 the next section 2/5 while the last section will be marked Ls; therefore, the first pick of this weave would be marked 6/1 5/2 4/3 3/4 2/5 1/6. It is next necessary to run up this twill in the regular 45° manner until it is complete; that is until it occupies 42 ends and 42 picks. Fig. 50 (iz) shows the complete weave. After the regular twill has been formed it is necessary to decide what angle the diagonal shall form. If it is to be a 63° diagonal, every other end of the regular twill may be taken. If it is to form an angle of 72°, every third end of the regular twill will be taken, and so on. Suppose that in this case it is desired to have the diagonal form an angle of 72°.

The weave is then shaded gradually until a point is reached where the filling will be found to predominate largely on the surface. In many cases these diagonals are made to shade in both directions; that is, the warp floats will be found gradually to grow less until the filling predominates, when the weave will again be shaded until the warp predominates, instead of breaking off suddenly as in Fig. 50 (b). In making the regular twill weave for the base of a shaded diagonal, the perfect results are obtained if the weave is equally flushed. In order to find this base, the following method is employed: Mark the numbers that indicate the number of warp ends to be lifted over the first pick, beginning with 1 and running up as high as desired, repeating the highest number and then grading down again but stopping with 2 instead of 1; thus,(1 2 3 4 4 3 2)/.

Then put 1 to represent one end down between the two highest numbers and grade in each direction until the highest number is reached at each end; thus, (. This method makes a perfect, equally flushed weave, since the same number of warp ends are up as are down, and also where 4 warp ends are up in succession (1 2 3 4 4 3 2)/(4 3 2 1 2 3 4) end is down between them, and where 4 warp ends are down in succession 1 warp end is up between them. Fig. 51 (a) shows the regular twill weave formed in this manner with the base given and Fig. 51 (6) shows a 63° diagonal derived by taking every other end in proper rotation. Shaded diagonal weaves are woven with a warp_of one solid color and a filling of another solid color opposed to that of the warp, as for instance, a black warp and white filling, or vice versa; this brings out the shaded effect of the weave.

A Missed Opportunity to Learn from Failure