A procedure for examining the various activities associated with the problem which ensures a systematic, objective and critical evaluation of the existing factors and in addition an imaginative approach while developing improvements

Method study proper is concerned with broad investigation and improvement of a shop/section, the layout of equipment and machines and the movement of men and materials.

The main purpose of the method study is to eliminate unnecessary operations and to achieve the best method of performing the operation.

Important objectives of method study are

The Function of Method Study

Method study does not replace the ability to make the best use of available information, the inventive genius or the organizing ability necessary to develop new methods. What the analytical approach of method study does, by its carefully planned sequence of analysis, is to show where change is likely to be most effective by highlighting unnecessary activities and showing where improvements are possible.

In this way, thoughts are directed into channels likely to be profitable, and any inherent flair for improvements the members of the work-study team may possess stands the best chance of finding full expression. Thus, method study enables the ordinary man to improve methods and at the same time avoid the dangers of taking shortcuts.

The basic approach to method study consists of the following eight steps. The detailed procedure for conducting the method study is shown in Fig. 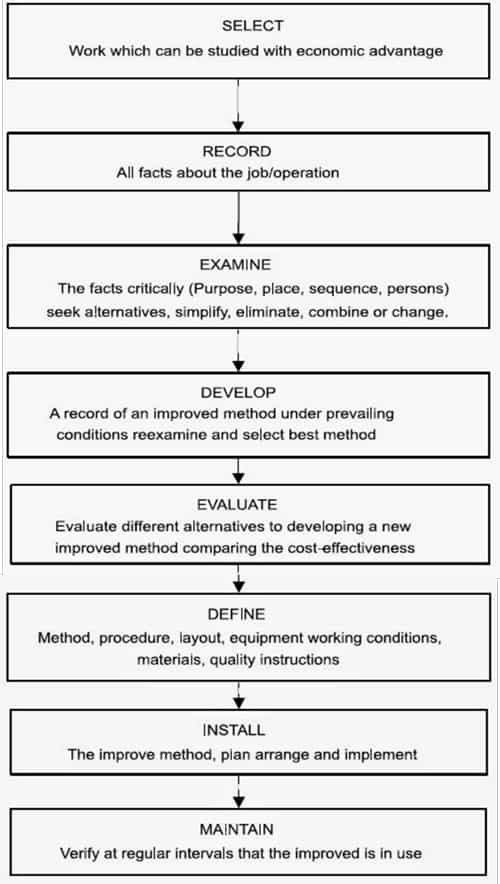 The graphical method of recording was originated by Gilbert, in order to make the presentation of the facts clearly without any ambiguity and enable them to grasp them quickly and clearly. It is useful to use symbols instead of written descriptions.

An operation takes place when there is a change in the physical or chemical characteristics of an object. An assembly or disassembly is also an operation. This symbol is used for the activities of grasp, position, use, release, etc. of a tool, component or material.

This refers to the movement of an object or operator or equipment from one place to another. When the movement takes place during an operation, it is not called transport.

Example: Moving the material by a trolley Operator going to the stores to get some tools.

Inspection is checking an object for its quality, quantity or identifications. Example: Checking the diameter of a rod. Counting the number of products produced etc. The symbol for inspection is not much used because the hand movements when inspecting an article (holding it and examining it visually or gauging it) may be classified as “operations” on the two-handed chart. It may, however, sometimes be useful to employ the “inspection” symbol to draw attention to the examination of a piece.

Delay occurs when an object or operator is waiting for the next activity. Example: An operator waiting to get a tool in the stores. Workpieces stocked near the machine before the next operation

Storage takes place when an object is stored and protected against unauthorized removal.

Example: Raw material in the storeroom.

Select the work worth studying and define the objectives to be achieved. An objective may be to reduce the manufacturing cost, or to reduce bottlenecks or to reduce fatigue incurred by the workers in order to increase their efficiency.

There are three factors that should be kept in mind when selecting a job.

The question is whether a change is likely to achieve the following results sufficiently to make the cost of the study worthwhile:

The method study involves cost and time. If sufficient returns are not attained, the whole exercise will go to waste. Thus, the money spent should be justified by the savings from it. The following guidelines can be used for selecting a job:

The method study man should be careful enough to select a job in which he has the technical knowledge and expertise. A person selecting a job in his area of expertise is going to do full justice.
Other factors which favour selection in technical aspect are:

Method study means a change as it is going to affect the way in which the job is done presently and is not fully accepted by the workman and the union. Human considerations play a vital role in method study. These are some of the situations where the human aspect should be given due importance:

Record all the relevant information pertaining to the existing method (if any) in detail and in the form of a chart to obtain a clearer picture about the same.

Recording can be done with the help of the following aids: 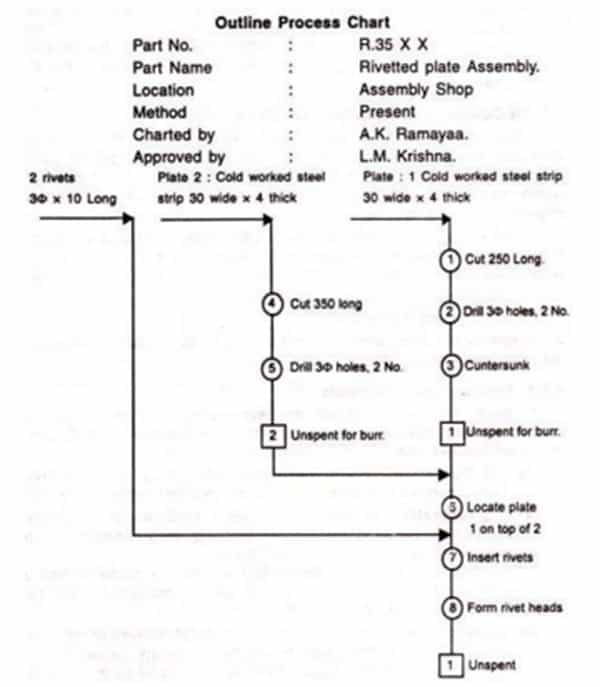 Flow process chart can be of three types 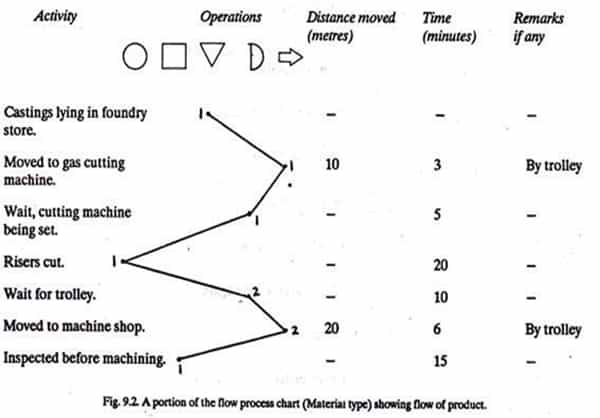 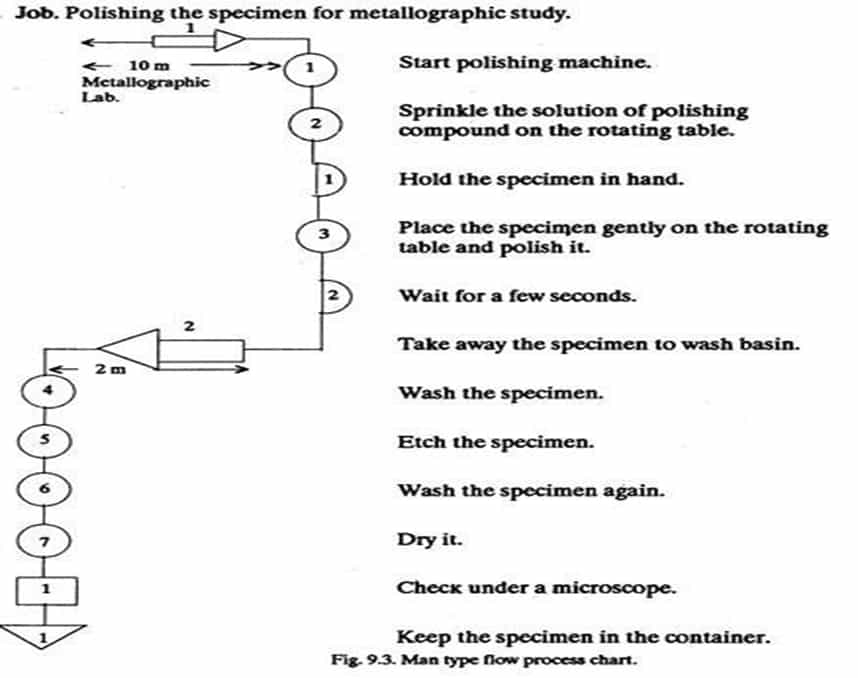 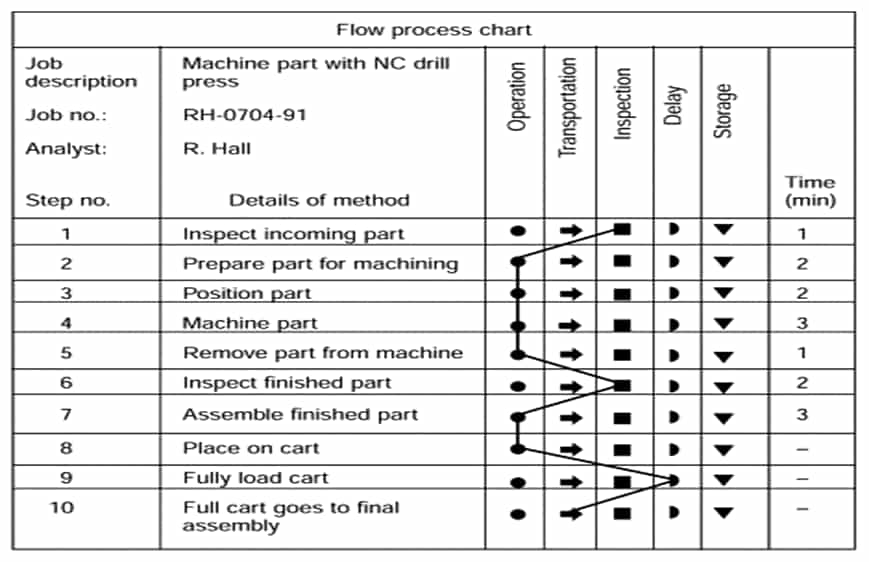 For example, in the travel chart given below BF and CD departments having maximum weights (4 each) require the highest proximity to each other. Next in priority of proximity are BD and DF combinations in layout. A travel chart is very useful in highlighting the distance, the volume that materials have to be moved among the different work stations. 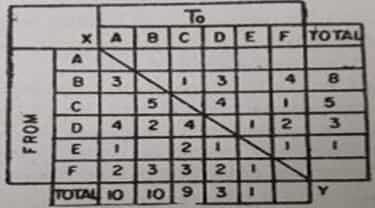 The Left- and Right-Hand Chart is a process chart in which the activities of a worker’s hands (or limbs) are recorded in their relationship to one another.

It is a specialized form of process chart because it shows the two hands (and sometimes the feet) of the operative moving or static in relation to one another, usually in relation to a time scale.

One advantage of incorporating a time scale in the chart form is that the symbols for what the two hands are doing at any given moment are brought opposite each other.

The two-handed process chart is generally used for repetitive operations when one complete cycle of the work is to be recorded.

Given below is an example of cutting glass tubes: 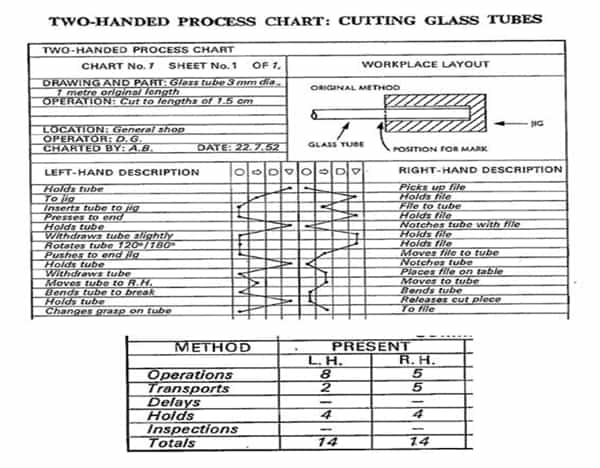 Where a number of workers work in a group or an individual operator handles two or more machines, their activities have to be coordinated for achieving proper results. A multiple activity charts records simultaneously the activities of all the workers and machines on a common time scale and thus shows inter-relations between them. 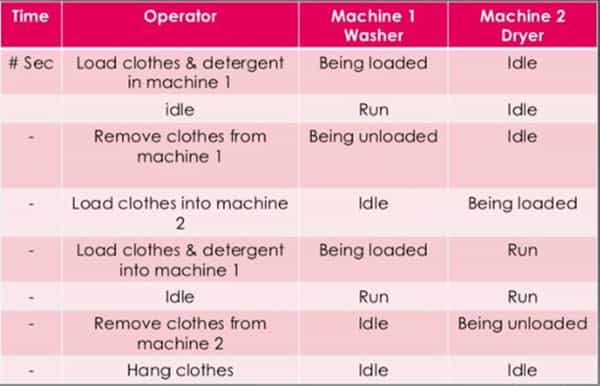 A gang process chart is another type of multiple activity chart which portrays the relationship of the activities carried out by different members of a group (or gang) with respect to one another while doing a job such as riveting. The aim (of the chart) is to reduce idle and ineffective time and to improve the efficiency of the gang operations.

A gang process chart looks like a man-machine chart with the difference that instead of one operator, there are a number of operators or workers.

A gang process chart is another type of multiple activity chart which portrays the relationship of the activities carried out by different members of a group (or gang) with respect to one another while doing a job such as riveting. The aim (of the chart) is to reduce idle and ineffective time and to improve the efficiency of the gang operations.

A gang process chart looks like a man-machine chart with the difference that instead of one operator, there are a number of operators or workers. 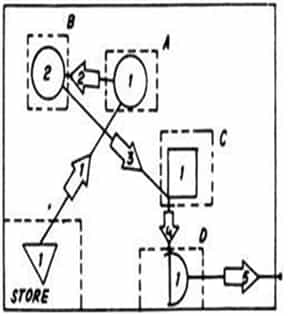 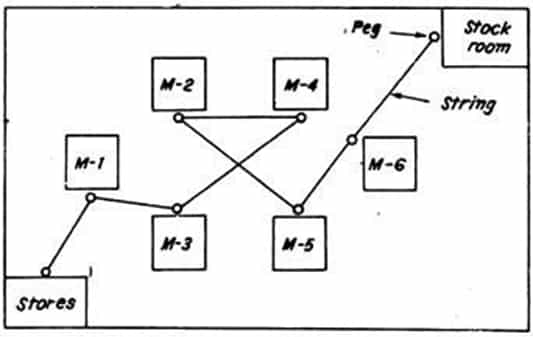 A string diagram picturises the movements:

(Vii) Is advantageous in studying the movements of:

If the workers or materials move in some irregular or curvilinear path, it is not possible to trace exactly the same on the string diagram and thus 1.0 estimate can be made regarding the total distance travelled by the workers or the materials.

A string diagram picturises the movements:

(Vii) Is advantageous in studying the movements of:

If the workers or materials move in some irregular or curvilinear path, it is not possible to trace exactly the same on the string diagram and thus 1.0 estimate can be made regarding the total distance travelled by the workers or the materials.

Why is chrono cycle graph used? 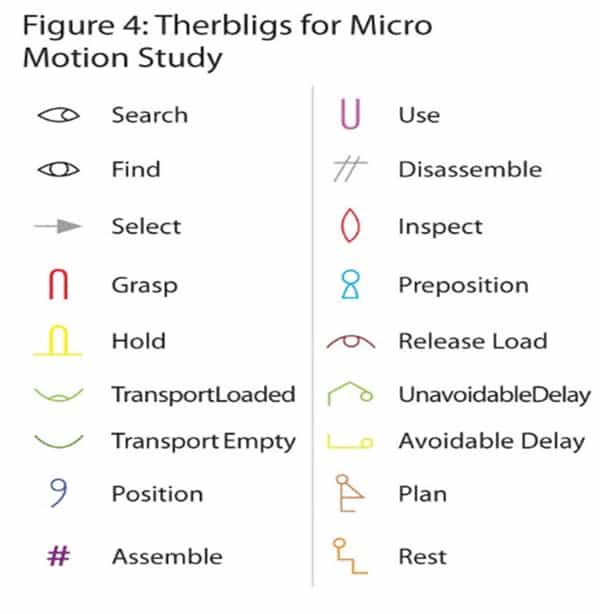 It is an extremely detailed left-and right-hand operation chart. It shows on a common time scale the simultaneous minute movements (therbligs) performed by the two hands of an operator. Besides hands, the movements of other limbs of an operator may also be recorded. The time scale is represented in winks (1/2000 of a minute).

S.I.M.O. chart is generally used for micromotion analysis of: 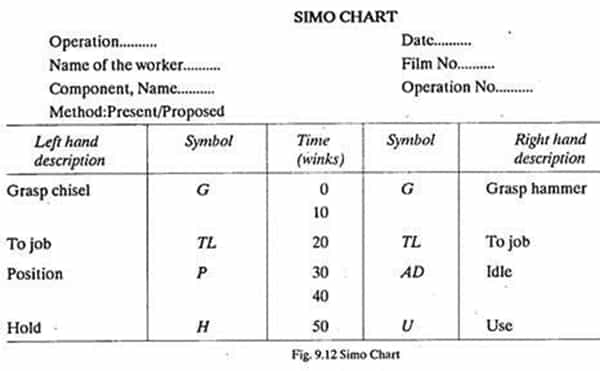 This is an important stage of Method Study; the information that is being collected is scrutinized, and each part of the job is critically examined to determine whether any part may be:

For effective examination of the facts, the following questions are generally asked:

Rearranging, simplifying, combining, eliminating or modifying the facts or records obtains a base for an improved method.

Once a decision has been taken on the changes in method to be adopted, it is important that the new method should be strictly defined.

It is desirable to prepare a written standard practice, also known as an “operative instruction sheet”.

Prior to installing the new method, decisions must be taken on:

The end product of the installation stage is that the new method is in operation at the work site; there is complete control of line management; and finally, all members of the department are fully conversant with the method.

With this data, changes in the method can be detected. If changes are considered to be useful, the instruction sheet can be amended to incorporate them. If they are thought undesirable, they can be removed through line management.