What is Batik? How to manufacture Batik designs? Origin and details.

Batik is a textile art used to print or decorate the fabric and also called as “wax writing”. It is a technique of covering parts of fabric which will not receive color. The creation of batik involves three major processes – waxing, dying and de-waxing.

Batik is a textile art used to print or decorate the fabric. It is one of the ancient yet consistent styles of designing or printing the fabric. In this process, the wax is applied on to the cloth to resist the dyes. Therefore they are also called as “wax writing”. It is a technique of covering parts of fabric which will not receive color. The waxed areas keep their original color. This wax can be later removed after dying and re-applied several times. When the wax is removed the contrast between the dyed and un-dyed areas forms the pattern to make beautiful and intricate designs with different colors.

Batik designs are highly influenced by the cultural heritage and are becoming more widespread boosted by the dynamic development of technology, aesthetics. Batik is believed to be originated from India or China which was later was also known as Javanese art in Indonesia. We can get batik scarfs, pillow-covers, bed-sheets, shirts, dresses, wall hangings, curtains etc.

The origins of Batik are largely unknown. Evidence of this intricate art form has been discovered all over Central Asia, Middle East, and India.

Batik originated from Egypt in the 4th century BCE. It was used to wrap mummies where linen was soaked in wax, and it was scratched using a sharp tool.

Some researchers feel the technique was developed in India then spread out from there.

The history of Batik is tightly linked to China, made by Chinese artisans who migrated from their motherland where they were using Batik. Silk fabrics imprinted with Batik designs used to export from China through the Mediterranean Sea, therefore, the name “The Great Silk Route.

It is known when the art of batik was first practiced in Java, batik belonged only to royalty and families of wealth and position. It was a hobby for the royal woman. Aristocrats and royalty had certain designs identifying a family, social status or geographical location on the island.

Origin of the word “Batik”

The word Batik is believed to have come from the Indonesian word ‘ambatik’, which means a cloth that has tiny dots. Batik may also have originally come from the Javanese word ‘tritik’, a resist process for dying in which the patterns are retained on the textiles by tying and sewing areas before dying.

The word ‘batik’ is of Indonesian origin, even though the notion was known by Indians and Egyptians. The word Batik was initially an Indonesian-Malay word, which means to dot. The batik art of textile spread in the Malay and Bindu world, but Indonesia is the heart of the Batik.

The process of making Batik

Batik is created in several ways

Fabrics for Women and Children’s clothing 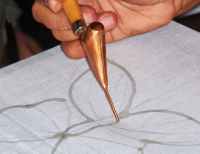 Batik making means a process of dying where the patterns are carefully drawn on the fabric with molten beeswax applied from a little copper cup with a fine spout called as the “tjanting” alias teapot. And then the same is dipped in the dye pot. Knowing how to use the wax is of prime importance. The ideal mixture for batik wax is 30 percent beeswax and 70 percent paraffin wax (but these days mostly paraffin wax is used as it is easily available and less costly). A stiffer wax made of rosin and paraffin mixed with varnish gums are used for stamping the patterns. It is the skillful cracking that is important. While applying, the wax should not be overheated or it will catch fire. Correct knowledge of colors is also important.

The cloth used should be strong enough to bear the heat and wax. Cambric, Poplin, Cotton , and Coils are used besides pure silk. Synthetic fabrics should not be used as they cannot sustain heat. For repetitive designs, in order to save time the wax is applied by metal die or a block made by inserting thin strips of sheet brass in a wooden frame so that the edges of the brass form the desired design pattern. These blocks having a handle are covered with a cloth and are dipped in the molten wax and the excess wax is removed by pressing it against a pad which is kept warm by keeping it near fire of the melting pot. The pattern is thus printed on the cloth instead of being poured on from a small cup out of a spout.

The wax resist is often combined with block printing. It is easy to apply wax through a stencil either with a brush or using a tjanting. To get the reverse effect by cutting out the pattern on a stiff cardboard or thin metal and then using it as a template, pouring and painting the wax around it leaving the pattern in the original cloth to be dyed later.

For example, in Java of Indonesia, the major colors used are Indigo blue and Golden Brown dye made from the bark of the mango tree, Black (which is obtained from combining the two colors) and White. The dying process always goes from lighter to darker shades therefore first Indigo is applied and all the cloth except the blue and the black is covered with wax. Then the color is set by the oxidation process. After which the all the wax is removed by washing the fabric in soap and boiling water mixture, then the fabric is dried and the wax is re-applied on the white and blue painted area which are not supposed to get colored in brown which is used without mordanting. The dyes must be used cold in order to avoid melting of the wax. The fabric is dipped several times in the dye till a satisfied shade is achieved. After the final dyeing, the wax is removed with a hot bath of wood ashes or soap. And then the garment is pressed. And the fabric is ready.

The uniqueness of batik fabric is the crinkled effect due to the braking of wax on the cloth while dying and thereby admitting colors in the protected cloth in fine lines or streaks. This help in distinguishing the wax resist work with the paste resist work which will give a smooth clean white background or if applied lightly would give a uniformly shaded background instead of the irregular lines of color.

Batik in the modern world

The striking beauty of batik bedspreads, curtains, tablecloths, and placemats is indescribable. We can get bright colors and the designs. The batik industry is still very much alive today. Although it is common to see the mass production of batik with machines, it is still made by hand in many parts of the world. There is a considerable market for this high-quality cloth.

Batik is still popular today because of its artistic freedom. The designs become whatever the artist’s heart desires. Batik is very durable: it has more colorfastness than printed fabrics because through the dyeing process the fabric absorbs the color so well that it does not easily fade. The batik technique first started out as a decoration for royals. Today, the striking and intricate patterns can be seen on the ramp, in the office, and on formal occasions.