Sample warps are developed for sampling purposes. It gives full proof of its performances during this production phase of new items.

This warping process, which was developed for sampling purposes, gives full proof of its performances during this production phase of new items. This particular process is composed of several warping operations which wind up a limited thread length and place on the warping width several bands of different colors to get the color variants of the fabric. This kind of warps can be obtained also by section warping, which however involves a considerable loss of time owing to frequent cone changes and definitely higher investments in raw materials.

In practice, a cone per color is sufficient to obtain any required warping sequence. The machine is composed of a small creel where the cones of the warping sequence are placed, by a thread guide which winds up a preset number of meters (selectable with a pattern or a control device) taken from the cone according to the thread sequence in progress.

The latest solution with revolving creel permits to wind up to 12 threads at a time at a winding speed of max. 1200 meters/minute. Once the winding operation is concluded, the threads are beamed on a weaver’s beam which follows the usual production cycle.

The machine manufacturers proposed initially two solutions for this kind of warpers: the first solution envisaged a vertical development of the winding blanket, whereas according to the latest solution the threads are pre-wound on a drum before being wound on the weaver’s beam.

The warp length in this last model varies from 7 to 420 meters; some weavers consider this length as normal for their productions and therefore use this system side by side with the traditional sectional warping machine.

It is evident that the correct use of this machine permits to feed the weaving machine in a very short time while minimizing the use of materials and labor, especially if an automatic drawing-in equipment is available upstream. 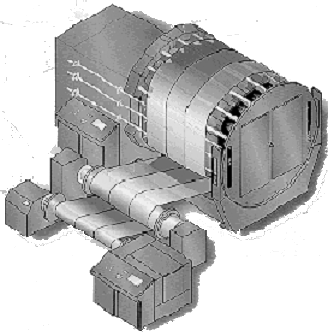 The timing of activities in Seconds is