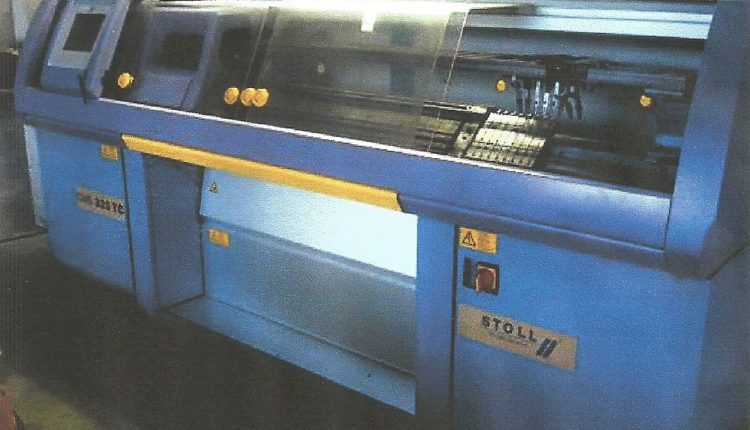 The two flat beds can be:

The manual flat knitting machine is made up of a frame carrying the base; this structure
supports all the needle beds and motions necessary for the knitting process

The yarn unwound from the spool is picked up by the feeding system: a tensioner, which adjusts
the feeding tension and a thread guide, driven by the machine carriage, which provides the
needle with yarn at the proper time.

The tensioner is made up by a spring-load flexible arm, that lowers when the yarn tension
increases, to feed a bigger quantity of yarn, and lifts up when the tension decreases.

The Needle-bed of a manual flat knitting machine

The needles (4) accommodated inside the grooves (1) of the needle-bed can be either in a
knitting or in a non-knitting position and are moved by special springs (2).

Placed between the grooves in the upper part of the needle-bed, the knock-over jacks (3) act as
supports for the yarn fed during the stitch formation.

A spring securing bar (5) and a needle securing bar (6) are also attached to the needle-bed to
keep needles and springs in a correct sliding position.

The Carriage of a Flat Knitting Machine

The carriage is made up of two metal plates linked by a stiff bridge (P); the plates
work individually and simultaneously on the front and the rear needle-beds.

The carriage carries out a double function and can be used:

The plates include cam locks (F) bearing the drive and control systems of the needles, i.e. the
cams.

When the carriage moves right- or leftwards, the thread guides (B),(C),(D),(E) are locked
individually by the corresponding pistons (A) on the upper part of the bridge, that are manually
driven.

Brushes are also mounted on the carriage to ensure a smooth needle latch opening and grant a
correct feeding of the yarn.

The Cam-locks of a Manual Flat Knitting Machine

The cam-locks are a cam system which gives the necessary working information to
the individual needles; they include a fixed part, working as support, and movable cams, which
can be divided into raising cams and lowering or knock-over cams (2).

The fixed or movable cams form a symmetrical channel where the needle butt slides; the needle
moves downward and upward in the groove to form the stitch.

The different parts of the cams are chamfered; their profiles are curvilinear to make the needle
move smoothly.

The angle of inclination of the cams ranges between 40° and 50°; these values grant an optimum
running of the needle and avoid high pressures between metal parts during the motion and
excessive tensions on the yarn during the downward stroke of the needle.

The carriage allows three different work ways according to the needle stroke and to the positions
of the raising cam:

The latch needle can have two different butt heights which make it a high-butt needle or a lowbutt needle.

The assembly of high-butt needles and low-butt needles on the knitting machine allows different
selection and different manufacturing work ways, according to the positions of the tucking and
looping cams.

Short Story of Textiles transformation of fiber to fashion

Introduction to breathable water-repellent textiles and their production methods

Textile Fabric Types – different types of fabrics and their…