The weaving is a process of formation of fabric with interlacement of two or more sets of yarns using a stable machine called loom. Human beings have started using the woven fabrics since the dawn of history. If we exclude the stone age period, the history of civilization is also, to some extent, the history of weaving. Though primitive civilizations used coarser threads to make fabrics which were crude and coarse, there are references of fine fabrics made from the filament of silk in China.

Weaving is one of the most common ways of making a two-dimensional woven fabric. The yarns are interlaced at right angles to each other dyeing the process of weaving: the yarn that is horizontal is called the weft yarn, and the yarn that goes vertically is known as the warp yarn. As it runs vertially down the length of the fabric the warp yarn is also refferred to as the grain line. If you put a ruler or tape measure diagonally across the fabric, you are finding the bias. At the edge of a woven piece of fabric, the weft yarns wrap around the warp yarns and this is called the selvedge.

Plain weave is the simplest and tightest weave. The weft yarn goes over and under alternate warp yarns; the closer the yarns the denser the fabric. This fabric looks the same on both sides and is the cheapest to make. Examples of plain weave fabrics are calico, taffeta, Habutai silk, viole, cotton shirting and muslin.

Twill weave is slightly more complicated. The weft yarn goes over more than one warp yarn is recognisable by a diagonal stripe on the fabric. This is a strong weave for soft yarns, such as wools and cotton used to make tartan, tweed, denim and gabardine.

Pile weave loops or cut loops form a raised texture on the fabric.

Satin weaves (or sateen weaves) are created in a uniform in which wither the warp or the weft floats over flour or more yarns to give a real sheen to the fabric. Examples are duchess satin, crepe-backed satin and silk charmeuse.

Plain, twill and satin weaves can be combined in many ways to produce ribs and other types of patterns. Jacquard weaves have complex patterns such as flowers, leaves and lettering. You often see these weaves on which tablecloths, evening wear and soft furnishing such as curtains. Pole weaves are woven with an extra layer or weft yarns that form loops on the surface of the fabric; these can be left as loops or cut. Velvet and corduroy are examples of cut-pile weaves and terry towelling is a looped pile.

Woven fabrics have the following properties 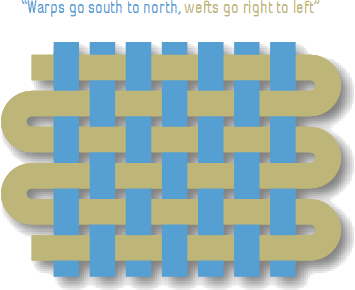 Woven fabric is normally much longer in the warp direction than it is wide, that is, in the weft direction. Warp yarns are fed from large reels called creels or beams. Typically, these hold about 4500 separate pieces of yarn, each about 500 yards (450 m) long. The filling yarns are fed from bobbins, called quills, carried in shuttles (hollow projectiles) that are moved back and forth across the warp yarns, passing over some and under others. The shuttle is designed so that the yarn it carries can unwind freely as the shuttle moves. Each length of yarn, fed from the shuttle as it moves across the loom, is called a pick. The yarn folds over itself at the end of each pick and forms another pick as the shuttle returns. When the yarn in a particular shuttle is exhausted, current production looms have automatic devices that exchange the empty quill with a full one.

A typical loom in operation (weaving)

The warp yarns may be coated with a temporary sizing for protection against damage during the operation. The process of applying this coating by taking yarn from a large rack, called a creel, passing it through comb guides and through a bath of starch, and winding it on a warp beam, is called beaming or slashing.

Merchandising of Men’s Shirt in Bangladesh – A…