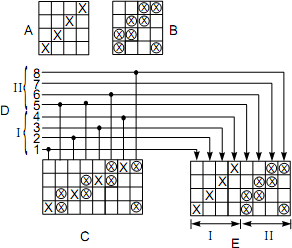 Combination twills find extensive use in the worsted industry in the production of garment fabrics, as these weaves are capable of producing compact textures. These twills are constructed by two methods :

In the figure A and B show the basic twill designs. In figure A is shown a 1/3 twill and B is shown a 2/2 twill and C, D and E show the design, draft and peg plan respectively. The type of draft used here is the divided draft. The heald shafts are divided into two groups, the first group controls the first design (1/3 twill) and the second heald shaft controls the second design (2/2 twill). 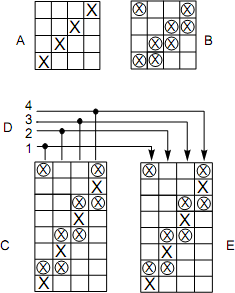 In figure A is shown the design for combined twill constructed by pick and pick combination. Fig.A and B show the basic designs. The weave marked weft way. Figures C, D and E show the design, draft and peg plan respectively. The draft used is a straight draft and hence the peg plan is same as design.

Schiffli Embroidery – Winding up the fabric

Drive and control of weaving machines