Carded Slivers are fed into the Draw-Frame and are stretched/Straightened and made into a single sliver. Also, fibre blending can be done at this stage. The cans that contain the sliver are placed along the draw-frame feeder rack, usually including eight pairs of cylinders (each pair is above the space occupied by a can),the lower cylinder is commanded positively, while the upper one rests on the lower one in order to ensure movement of the relative sliver that runs between the two.

The draw frame’s influence on quality, especially evenness, is highly important in yarn formation. If the draw frame is not properly adjusted, there be effects on yarn strength and elongation. Secondly, a defect arising at the draw frame itself can exert an effect of significant proportions on the overall yarn formation process.

Doubling is a process used in yarn manufacturing by which a single product is produced from a several intermediate feed product. For example, sliver doubling where 4 to 8 slivers are fed to draw frame and 1 sliver is delivered. On the other hand, the draft is to reduce the linear density of a fibrous assembly by drawing. This process is called drafting and drafting operation increases the unevenness. The function of draw frame is to provide doubling and drawing at the same time.

Tasks of the draw frame

Within the sequence of m/c in the cotton spinning mill, the draw-frame is the definitive compensation point for elimination errors.

Inadequacies in the product leaving the draw-frame not only pass into the yarn, they are actually reinforced by drafting effects following the draw frame. The yarn is never better than the draw frame sliver

At drawing stage, the material passes not only one m/c but usually 2, arranged 1 after the other & combined to form a group. Processing in 2 passages is necessary completely to fulfill the requirements. The 2nd passage is often superfluous after combing m/c because then it does not normally generate any improvement in quality.

In old machinery, 3 drawings were used, breaker, intermediate & finisher. But now in latest m/c only 2 drawings, breaker & finisher are used & in D-35 only one drawing is used. 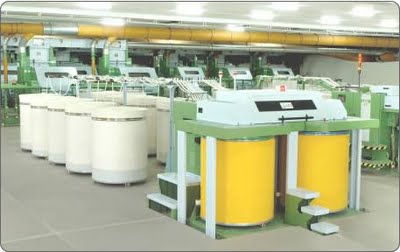