The musk ox, also known as Ovibos moschatus, is an ancient species of arctic mammal currently found in remote areas of the far north, including Greenland, Alaska, Canada and Siberia. During the Pleistocene, musk ox wandered across the Bering Land Bridge to populate North America with the likes of the woolly mammoth, saber-toothed cat, and giant ground sloth. They provide us with Qiviut fiber. 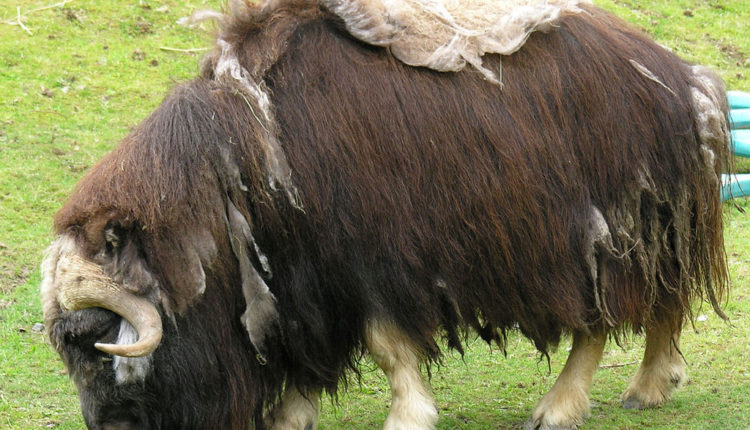 Qiviut is very rare and one of the finest fibers in the world. It compares favorably with Cashmere and Vicuna. Qiviut has no barbs and does not scratch like wool. Qiviut does not shrink like most wools because it is a hair rather than a wool. The fine Qiviut fiber has good tensile strength but does not hold up well under friction.

The raw musk-ox hair contains about 8% fat and possibly yield in the clean material.

the affinity to wool dyestuffs is equal to any other wool. The brightness of the shades is limited because of the natural gray of the wool. Through bleaching, this natural color can be lightened to a very light tan, but not entirely removed. The fiber is more sensitive to chemicals, alkalies, and acids than wool due to the high fineness.

In the wild, this fiber falls to the ground as it is shed, and is quickly destroyed by the harsh forces of nature. The domestic animals are combed, which makes it possible to harvest the fiber at its best.

The musk oxen are large animals that look a lot like bison or buffalos, but are significantly smaller than cows and provide wool like sheep. Its long, brown fur hangs almost to its feet. It is peaceful animals that only eat plants and are full-grown at the age of six.

Musk oxen are one of the oldest species of mammals still living today. About one million years ago the ancestors of these bovines roamed the steppes of Northern Asia, along with the mammoth. They have acclimatized the barren arctic deserts with its extreme cold and food with low nutritive value.

Males (bulls) typically stand 4½ to 5 feet at the shoulder and can weigh up to 800 pounds. Females (cows) are much smaller, averaging approximately 4 feet in height and weighing up to 500 pounds.

The stocky musk ox has a cold-resistant, dark brown or black fur. Its coat contains thick guard hairs that nearly touch the ground and protect a very dense, wooly inner layer called qiviut (pronounced kiv-ee-ute), which sheds in the spring.

The male has thick horns that almost meet on top of its head in what is called a “boss.” The horns curve down around his face and out at the ends. The female has considerably smaller horns, without a boss. Instead, the top of her head is covered with whitish hair.

In the middle of the 18. century musk oxen were extinct in North America and only lived in  Greenland. Species from Greenland were moved to Canada, and today they live wild in Canada and are farm-raised in Alaska, Canada, and Montana. There are experiments at certain farms with a growth hormone, methionine, which should make the wool longer

In Greenland the Musk ox lives as it has always done, in the wild, forming small herds in the arctic desert land. It is fully grown at the age of 6 and there is strict hunting quota to ensure the population.

The musk ox sheds its fleece once a year, typically in spring, and grows a new layer each fall. It usually bears only one calf every two years. The fleece yield is five to seven pounds per musk ox, which is cleaned and de-haired.

In Greenland, some Inuit collect the wool from shrubs and rocks, but that wool is used only in the family. Every year a number of animals are hunted by local hunters, the meat sold in the local market. The hides are now sold to my supplier, the wool is cleaned and dehaired, sent to England to be cleaned again, and finally shipped til Denmark to be spun – and become the yarn I sell.

Cows may live more than 20 years, but the average lifespan is much less. On average, bulls die at a younger age than cows because of the increased risks of injury during fights over females.

Social by nature, muskoxen live in medium-sized groups of 10 to 20 individuals during the winter. During the summer, a dominant bull drives out the other males, forming a harem.

Bulls fight for dominance with threats, loud bellows, and ferocious head-butting during the breeding season, which occurs late summer. Two males will engage in a ritualized display designed to intimidate each other, including pawing at the ground, walking stiff-legged, and aggressively swinging their massive horns. Following the displays, the bulls will face-off and back up 100 feet or so before charging together at speeds close to 35 miles per hour. The head smashing may continue for up to a dozen times before one bull quits and submits to the other.

Gestation lasts eight to nine months, and a single calf is born late spring or early summer. Twins occur but are extremely rare.

When threatened, muskoxen form a defensive formation around their young.

They will first run to a higher location, then turn and stand shoulder-to-shoulder in a circle facing their enemies. With their heads lowered, they form an impenetrable wall.

The Arctic wolf is the muskox’s only serious predator.