The Ring Spinning is the most widely used form of the spinning machine due to significant advantages in comparison with the new spinning processes. The ring spinning machine is used in the textile industry to simultaneously twist staple fibers into yarn and then wind it onto bobbins for storage. The yarn loop rotating rapidly about a fixed axis generates a surface referred to as “balloon”. Ring frame settings are chosen to reduce yarn hairiness and the risk of glazing or melting the fiber.

What is Ring Spinning? 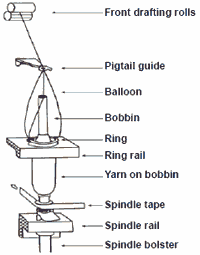 Ring Spinning is the oldest of the present day spinning processes. The fibre material is supplied to the ring-spinning machine in the form of roving. The fibre mass of the roving is reduced by a drafting unit. The twist inserted moves backwards and reaches the fibres leaving the drafting unit.

The fibres lay around one another in concentric helical paths. The normal forces encountered by the fibres enhance the adhesive forces between the fibres and prevent fibres from flying or slipping past each other under the tensile strain.

It is the process of further drawing out roving to the final yarn count needed, inserting twist to the fibres by means of a rotating spindle and winding the yarn on a bobbin. These three stages take place simultaneously and continuously.

The traveller moves on the ring without any physical drive but is carried along by the yarn it is threaded with. The rotation rate of traveller is lower than the spindle, and this difference in the speeds of traveller and the spindle enables the winding of the yarn on the tube.

A controlled up and down movement of the ring determines the shape of the yarn package, called Cop or Bobbin. Ring spinning technology provides the widest range in terms of the yarn counts it can produce.

Ring spinning is a comparatively expensive process because of its slower production speeds and the additional processes (roving and winding) required for producing ring spun yarns. Ringspun yarns produce high quality and are mainly produced in the fine (60 Ne, 10 tex) to medium count (30 Ne, 20 tex) range, with a small amount produced in the coarse count (10 Ne, 60 tex) range. End uses include high-quality underwear, shirting, towels. The fibres in the ring yarn are highly parallel and helical in nature, and the fibre arrangement is uniform along the thickness of the yarn. The yarn has a compact structure, with essentially no wrapper or hooked fibres. The self-locked structure is the result of intensive fibre migration, which in turn is influenced by the triangular geometry of the spinning zone and the high spinning tensions. The high axial strength of the yarn is the result of a unique self-locked structure.

Some of the basic principles of Ring Spinning are as follows:-

How Ring Spinning affects the quality of the yarn?

Ring spinning is the first stage of post spinning in which yarn produced from the roving installed on the hanger on the ring machine. Ring process is the heart of the textile plant and there is a lot of factors which has an effect on the yarn quality.

Following are the core objectives of ring spinning : 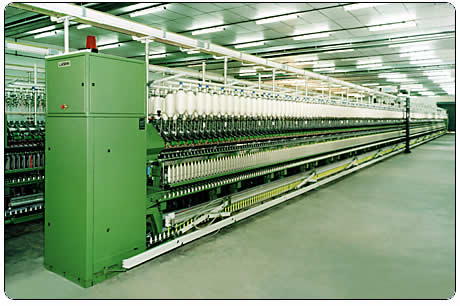 The ring spinning frame, commonly called the ring, is the conventional spinning system and it transforms the roving from the roving frame into spun yarn using the operations of:

In the last step of yarn production, the staple fibres are fed to the ring spinning frame, after passing through the blow room (opening and cleaning) and the carding frame, drawing frame and flyer (separation of individual fibres, parallelization, the formation of a fibre tape). Here, the finished yarn is produced by drawing and rotating operations.

Some of the Operation involved in the ring frame