The appearance and fit of a garment are highly dependent on each process. Patternmaking is one of the earliest steps in the development of a garment. It is a craft that has evolved over the centuries into a skilled technical process. Today, patternmaking tools have been carefully tailored to quickly perform repetitive time-consuming tasks, allowing apparel companies to cater to the fast-paced world of fashion. Nowadays sophisticated software programs are used for pattern making. 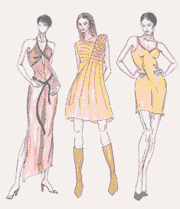 Prior to the Industrial Revolution, the art of patternmaking was highly revered. Tailors meticulously worked with their client’s personal measurements to customize patterns.

Clothing made by tailors was elaborate and relegated only to the very rich. With the onset of the Industrial Revolution, standardized patterns were essential to the success of ready-to-wear clothing.

Patterns can be formed by either a 2D or 3D process. Often a combination of methods is used to create the pattern. The most common 2D patternmaking methods are flat, drafting and reverse engineering. In the flat method, a pattern is generated from an existing foundation pattern called a sloper or block.

A sloper is a pattern that has no seam allowances or style lines. From a sloper, a myriad of garment styles can be generated. The patternmaker creates a new style by adding design details such as a collar, pocket, and pleats. The flat patternmaking method is widely used in the ready-to-wear market because it is fast and accurate.

In the drafting method, patterns are made directly from measurements taken from a preexisting garment, an individual or a body form. Using the collected measurements, the pattern is drawn directly onto paper.

In the 3D patternmaking process, the pattern pieces are generated from a 3D form. Draping is one of the oldest methods used to generate a pattern.

In the traditional draping process, a garment is produced by moulding, cutting and pinning fabric to a mannequin or individual. Style lines and constructions details of the drape are carefully marked and removed. Fabric pieces with the construction and style details are generated.

The fabric pieces are then laid flat on pattern paper and traced. The pattern is finalized by adding directional markings such as grainlines, notches, buttonholes, correct seam and hem allowances and facings. Draping is especially helpful when developing intricate garment styles or using unusual fabric. 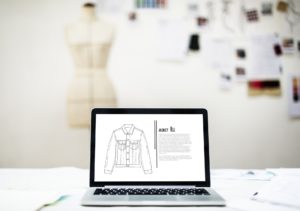 Computers have been used by apparel companies since the early 1980’s. Pattern Design Systems (PDS) have become invaluable tools to the patternmaker, assisting in much of the repetitive tasks associated with patternmaking. PDS systems are capable of storing an incredible amount of data that can be quickly retrieved, tweaked and re-filed.

Using a mouse or stylus, patternmakers are able to swiftly add style details and make changes. There are many benefits to PDS – speed, accuracy, and ease of data transmission being some of the most obvious. In today’s competitive environment, software companies are zeroing in on the growing demands of the apparel manufacturer.

The ability to mass produce customized patterns according to an individual’s unique body shape could offer tremendous benefits to the consumer, retailer, and apparel manufacturer.The textile industry continues to research this exciting field with a long-term goal of bringing superior fit and performance to the customer.

The apparel industry is notoriously fast-paced and competitive. Innovative software companies continue to make improvements to their PDS to enable apparel companies to better serve their customers. 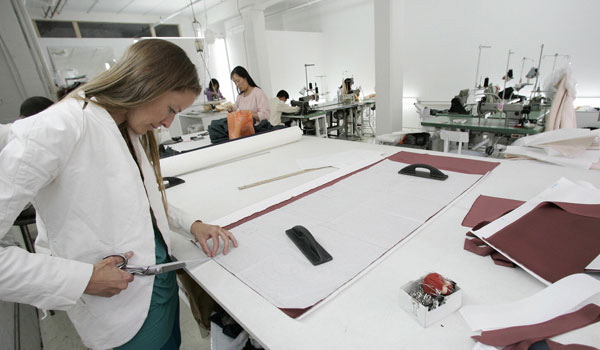 Once a designer has completed a drawing of a garment, it is transformed into a sample pattern.

“Patternmaking” is the process of creating all the correctly sized pieces needed to make a complete garment. For many smaller manufacturers, pattern making is still done on paper because the cost of computerized systems remains prohibitive.

The patternmaker may use one of the following techniques to develop a sample pattern. S/he may “manipulate” a new pattern by using geometric rules to modify or alter existing pattern pieces. S/he may translate a design that has been “draped” and pinned on a dress form by converting the shapes of the draped garment sections into paper pattern pieces.

Alternatively, s/he may pin pieces of muslin to a garment being copied and rub tailor’s chalk over the seams and darts, making a “muslin rub.” The chalk markings are then used to create a flat paper pattern.

From this initial pattern, a sample garment is developed. The sampling process allows a designer to correct any problems inherent in translating a one-dimensional sketch into a two-dimensional garment; it ensures that the designer’s fabric yardage specifications are accurate, and it provides an opportunity to spot potential production problems inherent in a design.

Once the sample is made, the manufacturer makes a small batch of duplicates for its sales force to test the market. If they sell well, the garment goes into larger volume production.

Although many firms still make patterns by hand, larger manufacturers make production patterns on a computer using CAD software. Other systems have been developed that allow patternmakers to create patterns manually by using a life-sized, sensitized table and a stylus attached to a computer.

As the patternmaker indicates points with the stylus, the pattern pieces are automatically entered into the CAD system where they can immediately be accessed for grading and marking. Although pattern making is becoming increasingly computerized, patternmakers still must learn the manual method because making patterns manually develop an advanced understanding of garment construction, the knowledge that cannot yet be replaced by a computer.

An existing pattern, such as a commercial pattern or block pattern, can be altered by hand to make it fit new design ideas and then a toile can be made up from the modified pattern. A pattern can also be made through disassembly of an existing product.

The designer uses a pattern that is similar to the new design to be made up. Separate pattern pieces can then be lengthened or shortened, given more fullness or made more tight fitting or the shape slightly changed. If one pattern piece is changed then other connecting pieces may have to be altered too. This may be done to raise a waistline, shorten a sleeve or enlarge an armhole, etc.

From the new pattern, further developments can be made to extend the range of products in a collection. For example, within the collection, there might be a bouse, a short dress and a longer dress, all with the same neckline design.

Fashion designers may decide to make their own pattern by modelling with calico fabric on a manikin; this is known as moulage. The manikin is taped to show where seams will be, then the sections are traced and a paper pattern is made. A toile from the new pattern can then be stitched together.

Most designers will speed the process of developing designs by using computer software to draw and fill in colour. Images can also be imported or scanned, and quickly edited.

Pattern generation software is used by designers to build new patterns from standard designs, which can then be printed out. The software can also be used to develop the pattern into a range of different sizes, for example, from size 8 to size 22. This is called pattern grading.

In industry when designers have to work through development rapidly, working closely with clients, design activities can be linked through to making prototypes and then the final batch of products. Often new product ideas are based on updating last season’s best-selling lines, or interpreting predicted fashion trends.

Purpose of Sampling and Prototypes

It is sometimes unnecessary to make up the whole product when smaller samples can be made to investigate and test techniques and present ideas to clients. A designer might store such samples in reference files, using them as starting points to build a new product.

Designers make samples, toiles or prototypes to test techniques and method of making and to look at cost implications. Often a supplier will work with a designer to modify fabric or component design for the new product being developed.

Models try on prototype garments so that the designer can make further adjustments to the pattern to ensure that the fit is correct. When the final design is agreed and a product specification is written, a set of standards in a range of product sizes can be made, using full production techniques and processes.

Many ideas start on paper as simple sketches by hand or on the computer. It is also a good idea to work on a three-dimensional way to explore possible ideas for trying out shaping the product and creating design features; this is called modelling.

Some designers choose to model in paper; a paper model is inexpensive and can easily be cut to size and manipulated. Garment designers use a manikin when testing the model; they also drape and pin lengths of fabric around it to see what might work. Digital photos can be taken to record ideas, and then the photos can be sketched over to further develop ideas.

Spreading – laying the fabrics for cutting