Picking (Including Opening and Blending)

Picking includes the separation of the raw fibers from the unwanted material: leaves, twigs, dirt, any remaining seeds, and other foreign items. The fibers are first blended with fibers from different lots or other sources to provide uniformity. (They also may be blended with different fibers to provide improved properties in the final fabric.) When cotton fibers are processed, the raw cotton is run through a cotton ginning operation and then undergoes a cleaning sequence before it is pressed into rectangular bales for shipment to the textile mill. There, the picking starts with blending machine operation. Bales are opened and cotton from several lots is fed to the machine. The cotton then proceeds to an opening machine that opens tufts of cotton with spiked teeth that pull the fibers apart. 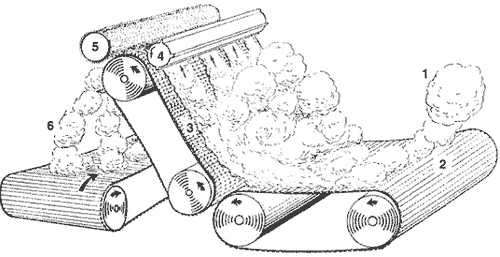 Cotton from bales (1), is dropped onto an apron conveyor (2) and moves to another apron conveyor (3), whose surface is covered with spikes. The spikes carry the cotton upward where some of it is knocked off by a ribbed roller (4). The cotton knocked back mixes with cotton carried by the spiked apron. Cotton that passes the knock-back roller is stripped off by another roll (5) and falls (6) to a conveyor that carries it to the next operation.

Cotton from the blending operation falls on an apron conveyor (1) and passes between feeder rolls (2) to a beater cylinder (3). The beater cylinder has rapidly rotating blades that take small tufts of cotton from the feeder rolls, loosen the bunches, remove trash, and move the cotton to the pair of screen rolls (4). The surfaces of these rolls are covered with a screen material. Air is drawn through the screens by a fan (5), pulling the cotton against the screens and forming a web. Small rolls (6), pull the cotton from the screen rolls and deposit it on another conveyor (7), that carries it to another beater (8), that removes more trash. The cotton then moves to the picker operation.

Cotton from the opening operation falls on an apron conveyor (1) which moves it to the first of a series of beaters (2), and screen rolls (3). The beaters and screen roles in the series are all similar but are progressively more refined as the cotton moves through the equipment. Each beater removes more trash from the cotton. When it reaches the output section (4), the cotton is in the form of a web or lap that is wound into a lap roll (5) by winding rolls (6). The lap rolls in then ready to be transported to the carding equipment.

Carding is a process similar to combing and brushing. It disentangles bunches and locks of fibers and arranges them in a parallel direction. It also further eliminates burrs and other foreign materials and fibers that are too short. The operation is performed on cotton, wool, waste silk, and synthetic staple fibers by a carding machine that consists of a moving conveyor belt with fine wire brushes and a revolving cylinder, also with fine wire hooks or brushes. The fibers from the picking operation are called “picker lap”, and are fed between the belt and the cylinder whose motions pull the fibers in the same direction to form a thin web. The web is fed into a funnel-like tube that forms it into a round rope-like body about 3/4 in (2 cm) in diameter. This is called a sliver or card sliver.

Combing is an additional fiber alignment operation performed on very fine yarns intended for finer fabrics. (Inexpensive and coarser fabrics are made from slivers processed without this further refining.) Fine-tooth combs are applied to the sliver from carding, separating out the shorter fibers, called noils, and aligning the longer fibers to a higher level of parallelism. The resulting strand is called a comb sliver. With its long fibers, the combed sliver provides a smoother, more even yarn.

After carding and, if performed, combing, several slivers are combined into one strand that is drawn to be longer and thinner. Drawing frames have several pairs of rollers through which the slivers pass. Each successive pair of rollers runs at a higher speed than the preceding pair so that the sliver is pulled longer and thinner as it moves through the drawing frame. The operation is repeated through several stages. The drawing operations produce a product called roving which has fewer irregularities than the original sliver. Afterward, the finer sliver is given a slight twist and is wound on bobbins.

Further draws out and twists fibers to join them together in a continuous yarn or thread. The work is performed on a spinning frame after drawing. The twist is important in providing sufficient strength to the yarn because twisting causes the filaments to interlock further with one another. The roving passes first through another set of drafting rolls, resulting in the lengthened yarn of the desired thickness.

There are three kinds of spinning frames: ring spinning, open-end (rotor) spinning, and air-jet spinning. With the common ring spinner, the lengthened yarn is fed onto a bobbin or spool on a rotating spindle. The winding is controlled by a traveler feed that moves on a ring around the spindle but at a slower speed than that of the spindle. The result is a twisting of the yarn. The yarn guide oscillates axially during winding to distribute the yarn neatly on the bobbin. The yarn can then be used to weave or knit textile fabrics or to make a thread, cord or rope. Staple yarns, made from shorter fibers require more twist to provide a sufficiently strong yarn; filaments have less need to be tightly twisted. For any fiber, yarns with a smaller amount of twist produce fabrics with a softer surface; yarn with a considerable twist, hard-twisted yarns, provide a fabric with a more wear resistant surface and better resistance to wrinkles and dirt, but with a greater tendency to shrinkage. Hosiery and crepe fabrics are made from hard-twisted yarns. 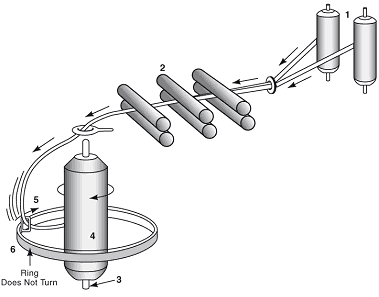 A spun sliver from the drawing operations, which is then called roving, and is wound on bobbins (1), and is fed through another series of drawing rollers (2), that further draw the strand to its final desired thickness. A larger bobbin (4) on a rotating spindle (3), turns at a constant speed. The speed of the final pair of drawing rollers is set a speed that delivers the yarn so that it is twisted by the desired amount as it is wound on the bobbin. The yarn is guided by the traveller (5), which slides around the bobbin on the ring (6). Because of some drag on the traveller, the yarn winds on the bobbin at the same rate of speed as it is delivered by the final pair of rollers.

Rotor Spinning is based on the principle of open-end spinning in which fiber continuity between the feed and twisting is broken. The opened fibers in the form of a stream are condensed to the required linear density and given a true twist.

The technological improvements in rotor spinning resulted in a phenomenal increase in spinning speeds, improved performance, and extended spinning limit. The basic principle of the system dates back to sixties when Du Pont made a prototype to produce fasciated yarns but employs only one air jet. The MJS system, on the other hand, employs two jets rotating in opposite directions which result in longer and more numerous wrapped portions producing strong yarns.

friction spinning is based on the principle of open-end spinning. The fibers are opened by an opening roller, as in rotor spinning, and collected in a suction area between two drums. The twist is imparted through friction between the yarn and the surface of the drum. The twisted strand is drawn along the direction of the axis of the drum. An extremely high rate of twist insertion is achieved because each rotation of drums imparts about 100 turns to the yarn.