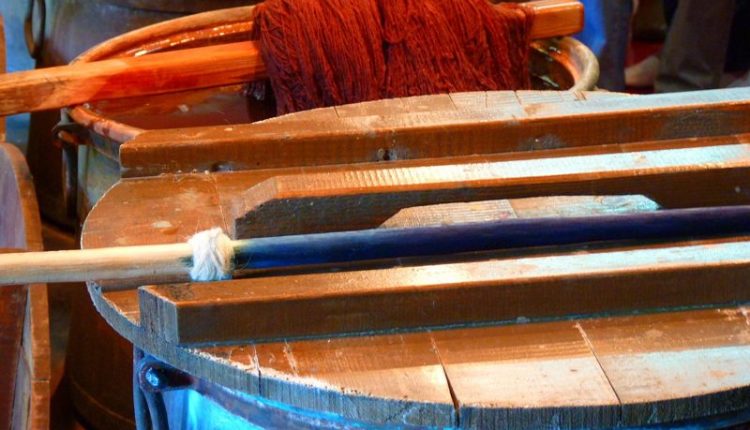 Throughout the long history of the tinctorial arts, the dyer has been confronted with match the performance of has colourants as closely as possible with the useful life of the fabric.

The dyeing of cotton (cellulosic) with direct, vat or azoic dyes depends on adsorption of dye molecules into the fibre, while vat and azoic dyes, the dyes are first adsorbed on to the fibre followed by reaction to convert them into an insoluble form, thus retained on the fibre. The possibility of attaching dyes to fibres by forming covalent bond has for long been attractive to dyestuff chemists because attachment by physical adsorption and mechanical retention has the disadvantages of either low wet fastness or high cost1.

An event which had far-reaching consequences was the discovery made by Rattee and Stephen (ICI) in 1954, of dyes containing a dichlorotriazinyl group which could be applied from aqueous solution and caused to form a covalent bond with cellulose by increasing the pH. This discovery resulted in first commercial reactive dyes for cellulose.

The appearance of reactive dyes on the market gave a great impulse to the investigation of reactive systems other the s-triazine and within a few years, several other ranges of commercial reactive dyes were available. The impact of reactive dyes in the synthetic dyestuffs scenario has been to such an extent that today reactive dyes constitute the largest group of dyes both on a monetary and bulk basis.

Batik designs – How to make Batik…

The reason for such rapid increases in demand for reactive dyes is primarily due to the excellent characteristic of reactive dyes. Eg. Their brilliant shades, excellent wet fastness of dying and simple dyeing operations, which have increasingly been accepted within the industry.

Despite the obvious advantage associated with reactive dyes, there are many problems with present qualified by reactive dyes have been raised below:

During the last decade, polyester-cotton blends have emerged as the single largest fabric used. In order to dye polyester-cotton blends, it is necessary to use disperse dye to colour the polyester together with a suitable dye for the cotton component, and it is obviously economical to apply both dyes simultaneously in a single process rather than using them separately.

In the single dyeing process the application temperature is fixed by the need to apply the disperse dye at an elevated temperature, and when the chosen cotton dye is a reactive dye this limits the choice to those dyes designed for the host application. An immediate difficulty arises because the satisfactory applications of disperse dye calls for the dyeing process to be operated either at neutrality or under acidic condition. Since alkaline condition lower dispersion stability, whereas the pressure of alkali is normally required for the application of reactive dye in order to ionize the cellulose and promote the dye-fibre reaction. Many developments have been done in this aspect during the last few years.

The research activity in reactive dyes has been mainly directed towards solving the mentioned deficiencies of reactive dyes. Moreover, the use of some new chromophoric system has been disclosed in the patent literature.

Fabrics for Men’s and Boy’s Wear