For the production of terry fabrics, following machines are used: rapier, projectile or even air jet
machines. These machines differ from the standard machines for plain fabric production owing to
following features:

The loop forming mechanisms mostly in use are based on the principle of causing a shifting of the fabric and of the warp, so as to modify the position between the stroking reed and the fabric formation edge.

The reed maintains a regular movement, whereas the fabric edge is displaced periodically from the stroke point through the horizontal shogging of the temples, of the cloth diverting beam and of the backrest roller. Thus two or three pre-strokes followed by a looping stroke are produced, with the consequent formation of the loops. 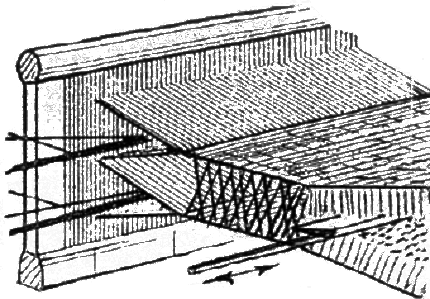 These machines are equipped with a 3 position shedding device (dobby or Jacquard machine), so as to form two overlapped and properly spaced out sheds and to permit to the pile warp to tie up the two fabrics together. Into each of the two shed a weft is inserted, usually by means of a pair of superimposed rods driven by the same gear.

The pile warp is subsequently cut directly on the machine through a blade with horizontal traverse motion, thus forming the pile on both fabrics, which are then wound up separately. This system is largely used today owing to its high performance. 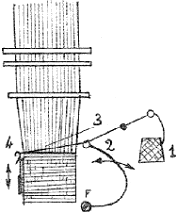 The name ribbons identify fabrics usually with a minimum width between 5 and 20 mm. They are produced today on particular multi-head machines with 2 to 12 heads, which are interchangeable at will and thus permit weaving several ribbons at the same time. The warp
threads can be fed by beams or by a bobbin creel.
The shed is formed by frames driven by cams (in case of small weft repeats) or by disks bearing linear cams composed of glieder chains (these are small cams linked together to form closed rings) in case of larger weft repeats. When weaving figured ribbons, the threads are controlled by an electronic Jacquard machine. The weft is inserted into the shed by a particular mechanism.
The thread taken up from bobbin 1 passes through a weft feeder which adjusts its quantity and tension, then enters the eyelet of a weft inserting element 2 composed of a bent traveling arm which, while penetrating into the shed 3, drags the weft until it protrudes properly from the opposite shed side 4, where a driven latch needle holds it when the weft feeder returns to its starting position; this way a double weft is laid down in every shed. The latch needle will form with the subsequent wefts a mesh chain originating the selvedge.
In order to get a firmer selvedge, an additional resistant yarn (supporting yarn) can be knitted separately or together with the wefts. Figure shows the different binding systems. On the other fabric side, the selvedge is formed in the normal way by interlacing the warp threads.
double velvetribbon weavingterry weaving
0 2,375
Share FacebookTwitterWhatsAppPinterestEmailLinkedin