These machines are produced only by few companies and are used for the manufacture of light and medium weight fabrics with standard characteristics and in water-repellent fiber materials,
primarily multi-filament synthetic yarns. Water jet machines are extensively used in East Asia, but
have limited importance in other countries. They are characterized in particular by high insertion
performance and low energy consumption.

The figure shows how the machine operates. The weft yarn, which is fed from cone 7, is drawn-off by a feeding and measuring device 2 and then passes through a tension regulator 3 and a weft clamp 4. When the insertion has to take place, the weft clamp loosens its hold and the thread inserted inside a nozzle 1 is struck by a jet of pressurized water and launched through the shed at high speed.

After the insertion has taken place, while the weft is held flat by the threads which are moved by the leno mechanisms 5, the thermal knives 14 enter into action on the launch side to cut the weft, and on the opposite side to trim the fabric. A yarn clamping device 13 holds the weft waste which is cut off by the right-handed thermal knife while rotating gears arrange for its removal (center selvedge).

The water is conveyed by a pump 8, provided with a filter, the piston of which is controlled by a
cam 10 producing the phases of water suction from the container 9 and of water supply to nozzle 1.

The sequence of the launch phases is the following:

A drying device removes the humidity absorbed by the fabric, sucking it through grooves
produced in the front beam 6 of the machine. A maximum of two weft colors can be inserted
(weft mixer). 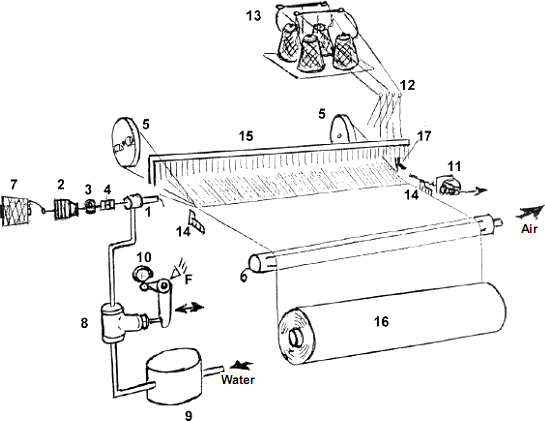 Bearing Structure of a Weaving Machine