Manmade fibers are manufactured using different mechanical and chemical processes for example Synthetic fibers from thermoplastics are produced by extruding the molten plastic through extrusion dies (spinnerets) into a stream of cold air that cools and solidifies the plastic. (The operation is referred to as melt spinning.) 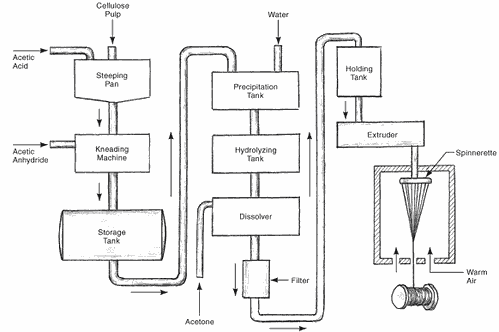 The term polymerization defines the process of macromolecules formation through repetition of basic units: it, of course, applies only to synthesis fibers. In general, polymerization reactions are activated and controlled during the process by various parameters, as temperature, pressure,
catalyzers, reaction stabilizers.

Types of regenerated fibres and properties

Relative viscosity is a parameter which is mostly used to identify nylon, while intrinsic viscosity (obtainable from the relative viscosity also by means of formulas) is used for polyester and the melt flow index for polypropylene.

There are basically two mechanisms of chemical reaction available for the synthesis of linear polymers:

The term spinning defines the extrusion process through bored devices (spinnerets) of fluid polymer masses which are able to solidify in a continuous flow. The spinning process is sometimes designated as “chemical or primary spinning” to distinguish it from the “textile or mechanical or secondary spinning”. The polymer processing from the solid to the fluid state can take place with two methods:

the polymer is solved in variable concentrations according to the kind of polymer and of solvent, anyhow such as to produce a sufficiently viscous liquid (dope) (this method is used by 30% of the fibers)

The polymer extruded by the spinnerets in form of filaments has not yet the properties which are typical of a textile fibre: in fact the polymer mass (solidified through cooling or solvent removal) is characterized by a mass of disorderly placed molecular chains (in amorphous state) which provides the material with poor thermal and chemical stability, low resistance to ageing, high plasticity and deformability and consequently insufficient physical/textile properties. If we take natural fibers as models, we need to orientate the molecular chains (orientation phase) in the direction of the fiber axis and at the same time or successively activate or increase the ordered arrangement of the intermolecular structure (crystallization phase).

Continuous filament yarns can be composed of a single filament (monofilament yarns) or of several filaments (multifilament yarns) and are described through abbreviations, the first figure of which indicates the total linear mass (expressed in dtex or, less usually, in den), the second figure indicates the filament number and a third figure if any shows the twists per length unit (turns/m) imparted to the yarn.

Monofilaments for traditional textile uses have linear masses ranging from 10 to 50 dtex approximately; monofilaments with larger linear masses find on the contrary use in technical applications and are identified with their thickness expressed by the diameter of the round cross-section (0.06?2 mm).

There is no substantial difference in the structure of natural fibers from that of man-made Fibres: both fiber categories are composed of macromolecules or by linear polymers, that is by the repetition of several simple molecules (monomers).

Man-made fibers are fibers in which either the basic chemical units have been formed by chemical synthesis followed by fiber formation or the polymers from natural sources have been dissolved and regenerated after passage through a spinneret to form fibers. Those fibers made by chemical synthesis are often called synthetic fibers, while fibers regenerated from natural polymer sources are called regenerated fibers or natural polymer fibers. In other words, all synthetic fibers and regenerated fibers are man-made fibers, since man is involved in the actual fiber formation process.

Natural fibers are essentially composed of atoms of various elements, such as carbon, hydrogen, oxygen, sometimes of nitrogen and other elements (sulphur) in lower quantities; during their biological growth, these elements form the rings of long molecular chains. The development of man-made fibres was based on the knowledge acquired with natural fibers which structure was taken as a model; the difference between the two fiber categories is that natural fibres form macromolecules through biological growth, while the growth process of man-made fibres is driven by technical equipment (artificial fibers use instead of natural polymers).

Definite qualities required for a fiber