The first functioning of rotor spinning, machine was presented at the ITMA in 1967.Yarn spinning according to the rotor spinning principle predominates for all nonconventional spinning methods.It omits the step of forming a roving.After drafting, the sliver is fed into a rotary beater.This device ensures that the fibers are beaten into a thin supply which enters a duct and gets deposited on the sides of the disc(rotor).The transportation of the fibers is achieved through air currents.

Rotor Spinning is a more recent method of yarn formation compared to Ring Spinning. This is a form of open-end spinning where the twist is introduced into the yarn without the need for package rotation. Allowing for higher twisting speeds with a relatively low power cost.

In rotor spinning a continuous supply of fibers is delivered from delivery rollers off a drafting system or from an opening unit.

The fibers are sucked down a delivery tube and deposited in the groove of the rotor as a continuous ring of fiber. The fiber layer is stripped off the rotor groove and the resultant yarn wound onto a package. The twist in the yarn being determined by the ratio of the rotational speed of the rotor and the linear speed of the yarn. 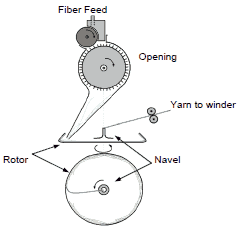 The production rates of rotor spinning are 6-8 times higher than that of ring spinning and as the machines are fed directly by sliver and yarn is wound onto packages ready for use in fabric formation the yarn is a lot cheaper to produce.

The use of this system has two basic advantages. It is fed by a sliver, not as with the ring frame by roving, and so eliminates the speed frame from the process line. It can also be modified to remove any remaining trash, thereby improving the yarn quality.

Open-end spinning produces a different type of yarn to ring frame spinning. Open-end yarns tend to be more uniform, lower in strength, more extensible, bulkier, more abrasion resistant and more absorbent. It is likely that with all of these differences, only some of which are beneficial, that open-end spinning will not replace ringspun yarn as originally thought, but will be a complimentary product.

Open-end spinning operates at a rate up to five times that of ring spinning and can be effectively used for cotton, polyester-cotton blends, as well as other short and medium staple systems. Synthetic staple fibers such as polyester alone cannot be effectively open end spun due to a dusting of oligomer from the fibers that interfere with the spinning action of the rotor. 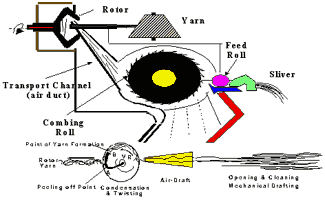 Rotor spinning involves the separation of fibers by rigorous drafting and the then recollection and twisting of fibers in a rotor. The draw frame sliver is presented to a spring-loaded feed plate and a feed roller. A combing roller covered with saw tooth wire clothing then individualizes fibers within the sliver.

Once opened, the fibers pass through
a transport tube in which they are further separated and parallelized before being deposited on the inside wall of the rotor. Centrifugal forces, generated by the rotor turning at high speeds, cause the fibers to collect along the walls of the rotor, forming a ring of fibers.

This fiber ring is then swept from the rotor by a newly formed yarn, which contains untwisted fibers. With each rotation of the rotor, the twist is inserted, converting the fiber bundle into a yarn as it is pulled out of the rotor through a navel.

The yarn is then taken up onto a cross-wound package, thus separating the winding process from twisting. As the yarn is drawn from the rotor, some fibers lying at the peeling point may
wrap around the yarn, resulting in the formation of random wrapper fibers, which are the characteristic of the open-end yarn structure.

The rotor-spun yarn has a three-part structure, with a relatively dense core (80-90% of fibers), a loose but a continuous sheath that wraps around the core (5-20% of fibers) and tightly wound surface coils as wrapper fibers (0.5-2% of fibers). The fiber configuration in the rotor yarn is not nearly parallel as in the ring yarn. These factors make rotor yarn bulkier, and the nonparallel
fibers explain the inferior tensile properties.

The relatively straight core fibers combined with the sheath-core structure make the yarn more rigid in terms of tensile and bending properties. The yarn is weaker than ring yarn because of its three-part structure, poor fiber extent, and less intensive fiber migration.

The yarn is, however, more uniform as compared to the ring yarn because of the short-term mass leveling action that occurs inside the rotor. Rotor yarn exhibits the properties of high extensibility and elasticity, good abrasion resistance and good insulation properties. But at the same time, the limitations faced by the rotor spinning include the requirement of finer and shorter fiber.

Extensive opening operation leads to a lot of fiber breakage, especially if the fibers are crimped, thus shorter fibers result in a comparatively weaker yarn. Fiber extent also reduces due to bending and buckling of fibers resulting in poorer strength.

Why is Sustainable Fashion not yet Inclusive?