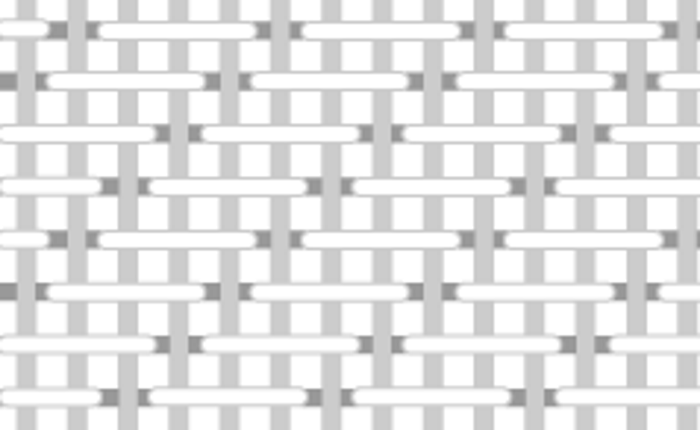 What are Regular Twills?

The interlacing of a regular twill weave shown in this manner is called the base of the twill. Since in regular twill weaves the ends interlace with the picks in exactly the same manner as the picks interlace with the ends, the base also shows the interlacing of the first pick, as it indicates that on the first pick the first 2 ends are up, the next 3 are down, the next 1 is up, and the next 2 are down. The sum of these numbers, eight, shows that the twill repeats on 8 ends and 8 picks. Suppose that it is desired to show the twill on design paper.

Marking this pick shows that the first 2 ends are up, the next 3 ends down, the next end up, and the next 2 ends down. The next step is to run up the twill in regular order; that is, if an end is upon one pick, on the next pick the next end in the direction in which the twill is to run is up. That this method of making a twill may be more readily understood, each end will be run up separately and later the complete design will be shown.

Next taking the second end and dealing with it in exactly the same manner will give the result shown in Fig. 8. It should be noted in connection with this figure that when running these marks on the design paper the eighth end is raised on the seventh pick. If this were continued in a regular line for the 8 picks, the next mark would come on the ninth end, but the weave is complete on 8 ends; consequently, the mark for the ninth end is placed on the first end, since the ninth end will be the first end of the next repeat, which of course is exactly like the first end of the repeat under consideration. That this is correct will be seen if two repeats of the weave are made.

If Figs. 7, 8, and 9 are combined, the complete twill will be obtained, as shown in Fig. 10. When constructing a twill, it is not necessary to run up each twill line separately as in Figs. 7, 8, and 9 and then combine them as in Fig. 10 since it is perfectly feasible to construct the entire twill as shown Fig, 10 at one Operation. The method running up each twill line separately is only to explain the construction of the complete twill.

A rule for making any regular twill when the interlacings of the first pick are given is as follows: Mark on the first pick of the weave the ends that are to be lifted on that pick, then above on the second pick place similar marks, moving them one square to the right if the twill is to run to the right or one square to the left if the twill is t rum to the left.Proceed with each pick, in the same way, moving one to the right or left as the case may be until there are as many picks as ends when the weave will be completed.