The results of energy consumption calculation in spinning mills on machines and compressed air. 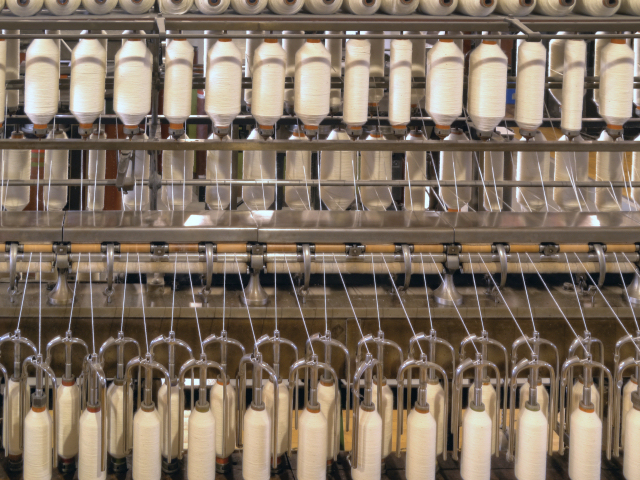 The results obtained by the procedure outlined are demonstrated in the following table. This contains production parameters (type and number of machines, actual production rate, actual installed power etc.) and calculated data (operating time, energy use for operating machines and compressed air). For the investigated spinning mill, the unit power needed for compressors to provide unit compressed air (NA) was determined as 0.12 kWh/m3.

As the machines in the blowing room were interconnected, the compressed air needed has been calculated cumulatively by taking the operating time as 6.6 hours. Using the parameters in the table and related equations, the total energy consumed for machines was found to be 7121.5 kWh and 3950.5 kWh of this was used by the ring spinning machines.

In order to see the percentage of the energy used for each machine, Figure 3 was obtained. As can be seen, the maximum energy consumption (3950.5 kWh) among machines occurred in ring spinning machines (55.5%) and carding machines follow this with a share of 18.2%.

This fgure also provides the opportunity for comparing the corresponding data with the data available in as shown in Table. The calculated share of each machine type in total energy consumption was compared with the results of 10 tex. As the 10 tex yarn is fner than 20 tex, the share of the ring machines for 10 tex yarn seemed to be higher than that of 20 tex, as expected.

Specifc energy consumption for the yarn concerned was determined as 3.32 kWh/kg which can also be seen from the table. Specifc energy consumption for 20 tex combed ring yarn changes between 3.49 and 3.62 kWh/kg among the chosen countries. The data obtained from the present study (3.32 kWh/kg) represents a relatively smaller value than that of the selected countries. It is thought that the difference between the values comes from the changes in manufacturing parameters of machines such as type, waste ratio, speed and energy effciency.

Schiffli Embroidery – Winding up the fabric

3 Things to Look for in Your First Sewing Machine