The needle is the basic element of loop formation in Knitting 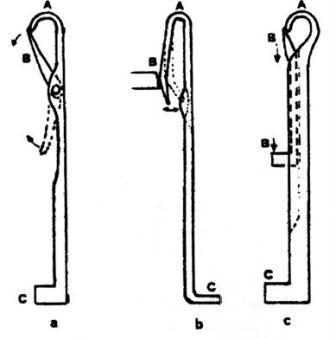 The needle is the basic element of loop formation. There are three most commonly used types of a needle the latch needle (a), the spring-beard needle (b) and the compound needle (c). We can divide a needle into three main parts:

During the loop formation, the hook must be closed in order to transfer the previous stitch
already formed on the new thread; this operation takes place in different ways according to the
type of needle used.

With the latch needle, the latch is hinged at a certain distance from the hook and can revolve:

In spring-beard needles, the hook is closed by an external device, the presser, which, at a
the specific time during the stitch formation comes in contact with it and makes it bend and close.
When the presser is pulled away, the hook springs back and opens the needle automatically.
The compound needle includes (inside the internal groove of the stem) a sliding closing element,
which opens and closes the hook through its upward and downward motion.

The use of the latch needle for knitting machinery has become increasingly widespread over the
last few years; the main advantage of this needle is that has a reduced stroke, which means a
higher speed and increased production capacity without stressing the thread during the transfer
steps. In addition, it offers a wider sampling potential and a better quality of the fabric
manufactured. The main drawbacks include higher costs and a more complicated operating
technology.

The elements which characterize this type of needle are the following:

Movement around a knitting needle

From a manufacturing point of view we can have two different types of a needle:

Die-cut needles (picture 9) are made from a steel wire shaped through various machining steps
to create a flat profile and form a hook, the section accommodating the latch, and an end butt
with tail; sometimes the butt is not obtained with a bending process but by a pressing one

Die-cut needles (picture 11) are made from a steel plate of the desired thickness, which is die-cut
so as to create the shape of a butt with or without a tail; the hook and latch fitting are created
with a special process.

The manufacturing process with the wire needle is the simplest and most cost-effective one,
while the die-cutting process gives better technical results and imparts greater stiffness to certain
sections of the needle.

A critical feature of all needles in the gauge; it is directly connected to the strength of the needle
which must bear the stress and strain generated during the various technical cycles of the
knitting process.

The gauge of the needle is directly proportional to the gauge of the machine; the needle must be
neither too thick (if so there would be enough space between a needle and the next one for
looping the yarn) nor too fine since in this case the needle, besides being too weak, could
compromise the resistance of the binding pattern which would result poorly balanced.

The table below shows the gauge of needles according to their thickness.
The values are indicative, as the real value of the needle gauge is only given by the
manufacturer’s specifications.