Woven fabrics are made by using two or more sets of yarn interlaced at right angles to each other. Much variety is produced by weaving.

Woven structures are classified into the following categories:

In case of simple structures, there is only one series of warp and weft threads. These threads interlace with one another perpendicularly. All the neighboring warp and weft threads are parallel to one another and play an equally important role in determining the properties of the fabric. In case of compound structures, there may be more than one series threads, of which one set forms the body or ground and the other forms the figuring or ornamentation. Unlike the simple structures, the neighboring threads need not be parallel to one another.

A weave is the interlacing pattern of the warp and weft. Two kinds of interlacing are possible :

There are two practical methods of weave representation:

Though this is a simple method, it is seldom used because the designer has to draw plenty of horizontal and vertical lines, which is time-consuming.

To show the warp overlap, a square is filled in or shaded. The blank square indicates that the weft thread is placed over the warp i.e. weft overlap. Several types of marks may be used to indicate the warp overlap. The ‘x’ mark is most commonly used.

Basic Elements of a Woven Design

The three basic elements in a woven design are : 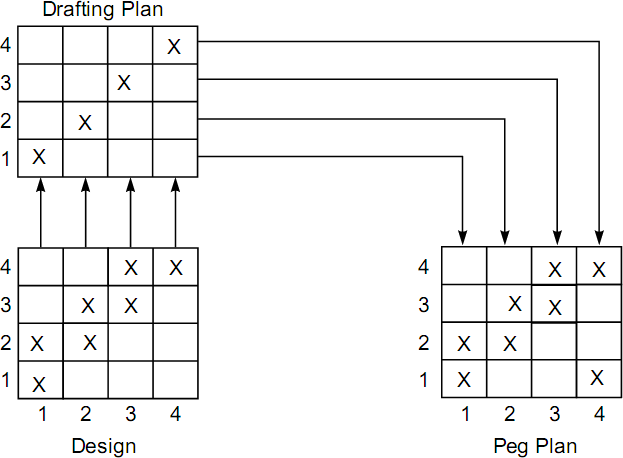 The design indicates the interlacement of warp and weft threads in the repeat of the design. It is made up of a number of squares, which constitute the repeat size of a design.

The draft or drawing plan indicates the manner of drawing the ends through the heald eyes and it also denotes the number of heald shaft required for a given weave repeat. The choice of the type of drafting plan depends upon the type of fabric woven.