There are various types of pattern making in garment manufacturing.

At most large manufacturers, patterns are made on a computer with computer-aided design (CAD) systems, the pattern maker manipulating small graphic patterns on the computer screen with a hand-held control device. Geometry drives can make an infinite number of changes to the shapes and sizes the pattern including creating new design lines or adding pleats, fullness, and seam allowances.To allow pattern makers to make patterns manually on a computer, another system has been developed allowing the pattern maker to work life-size on a sensitized table with traditional tools and styles that is attached to the table and the computer.

The style picks up the lines drawn on the table and shows them on the screen. Changes can also be made directly on the screen.In both cases, patterns are immediately available for other operations such as grading and marker making.The essential features of this technology are pattern design and pattern generation systems. 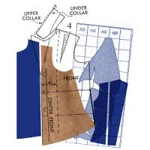 Block pattern is a basic pattern without any style features and incorporates the measurements, proportions, and posture of the body for which garments, developed from this pattern, are intended. Block pattern can be developed by either of the following methods.

The components of the pattern, usually the body and sleeve, are constructed by a draft(technical drawing) which incorporates the measurements and proportions of the particular system used by the pattern maker. It can be produced by a computer.

It entails the fitting of the block garment usually in toile, on a workroom stand of the appropriate size, when the fit balance is satisfactory, motile is removed from the stand and each component is copied on to pattern paper and the necessary making up allowances added. 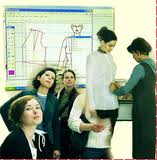 The styled patterns used for cutting the original sample garments can be developed by a variety of means, including the flat method, modelling or a combination of both. When using the flat method, the pattern maker introduces style lines of the garment on to a copy of the block pattern, performs the necessary manipulation and then adds the requisite sewing and other allowances to each component. Notches are made in related components in the seam lines as guides for alignment and matching during sewing and make-up.

Bra Anatomy and its Size