A carpet is a textile floor covering which consists of an upper layer of ‘pile’ which is attached to a backing. The pile is either made from wool or a manmade fibre such as nylon or polyester and usually consists of twisted tufts which are often heat-treated to maintain their structure. Carpets can be from wall to wall or smaller in size such as area rugs.

The knotted pile carpet are said to have originated in the 3rd or 2nd millennium BC in West Asia, or the Armenian Highland. Carpet weaving in India can be traced to the beginning of the Mughal empire wherein under the patronage of the Mughals, Indian craftsmen adopted Persian techniques and designs. Akbar, a Mughal emperor, introduced the art of carpet weaving to India, during his reign. The Mughal emperors patronized Persian carpets for their royal courts and palaces. The carpets woven in India showed the classic Persian style of fine knotting. The Indian carpets are known for their designs with attention to detail and presentation of realistic attributes. In India, carpet industry uses wool, silk, acrylic and Jute. 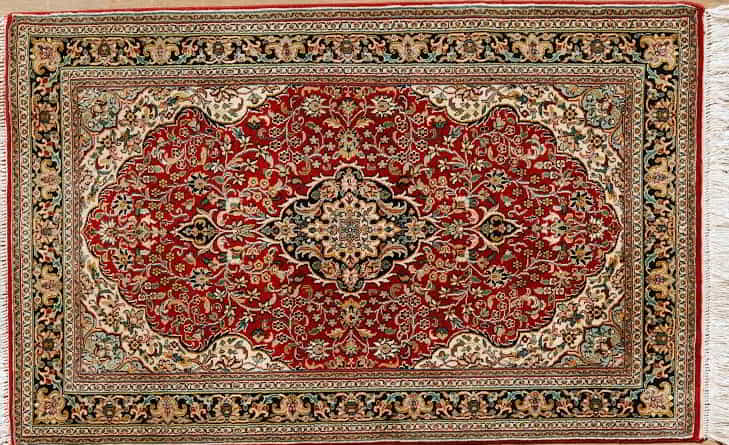 The carpets are made on looms similar to traditional handloom. The piles can either be cut pile or loop pile. Many coloured yarns are used in making of these carpets and this process of weaving produces intricate patterns. Woven carpets are produced in Kashmir, Mirzapur, Bhadohi, Jaipur and Agra in India.

These carpets are more technologically advanced as compared to woven carpets. Needle felts are produced by intermingling and felting individual fibers using barbed and forked needles and hence forming an extremely durable carpet. These carpets are generally used in areas which are prone to friction due to high footfall.

These carpets are made on upright or vertical looms. A knotted pile carpet is a supplementary weft cut-loop pile carpet where the structural weft threads alternate with a supplementary weft that rises at right angles to the surface of the weave. Knotting by hand is most prevalent in oriental carpets. Carpets produced in Kashmir are also hand-knotted.

In such carpets there is a pile injected into a backing material, which is then bonded to a secondary backing made of a woven fabric to provide stability. This is the most common method of manufacturing of domestic carpets for floor covering purposes in the world.

Common motifs include scrolling vine networks, arabesques, palmettes, cloud bands, medallions, and overlapping geometric compartments. Animals and humans are not depicted in the persian imagery because Islam is the dominant religion in this part of the world which forbids their depiction. Persian influenced imagery of trellis, vines, medallions, paisleys etc is seen in most of the Indian carpets. The majority of these carpets are wool and silk.

A durrie is a thick flat-woven rug used traditionally as a floor-covering. They come in variety of colours and patterns and have low maintenance cost as they do not get infected by Silverfish or other insects responsible for destroying carpets. Woven durries are produced in Jodhpur, Hoshiarpur, Bhatinda and Warangal in India.

Durries can be used year round, as the cotton durrie is warm in winters and cool in summers. The use of a durrie depends on the size, pattern and material. Durries are used in large political or social gatherings as well as in schools in rural areas as they are easily portable being light weight and foldable. Generally the material used for durries are cotton, wool, silk and jute.

A rug is a pile-less, woven textile floor covering that is made from various materials like linen, wool, cotton, jute etc. Cut shuttle and chenille rugs are made for the higher end of domestic or international market. In India these rugs are made with mainly recycled material which is used as weft. Panipat, Meerut and Bijnore are big production centers of rugs.