Since their introduction modern single-use diaper products have continuously improved, becoming lighter, more compact, more absorbent and easier to use. Today it is estimated that more than 95 percent of all parents use them – and it is generally recognized that modern disposable diapers are healthier for the infant’s skin. Their softness, lightness and breathable nature provide superior comfort for the baby; they are easy to put on and remove and are more convenient than reusable diapers as they eliminate the need for both constant laundering at very high temperatures to remove germs and drying. The industry is committed to providing baby diapers that give better skin care, a better performance, with reduced resource use and reduced environmental impact, all at an affordable price.

Manufacturing and Processing of Disposable Diapers 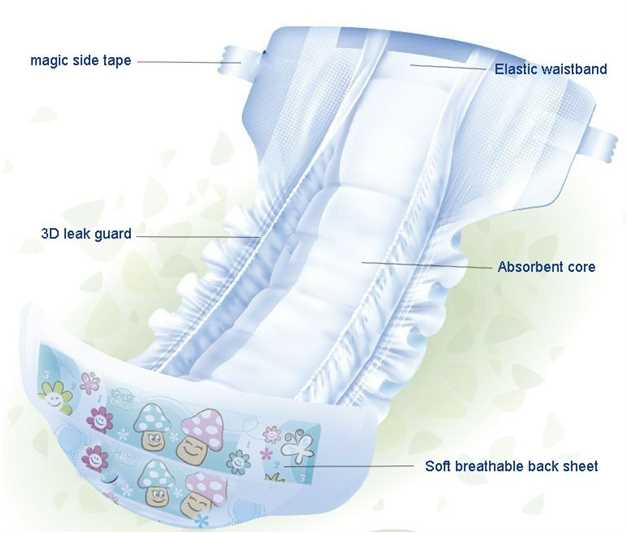 There are five main components that makeup diapers.

Formation of the absorbent pad

The absorbent pad is manufactured on a movable conveyer belt that passes through a long “forming chamber”.  The chamber at various points has pressurized nozzles spray for either polymer particles or fibrous material onto the conveyor surface. The conveyer belt bottom is perforated, and as the core pad material is sprayed onto the belt, with a vacuum pressure applied from below to pull down the fibres in order to form a flat pad. 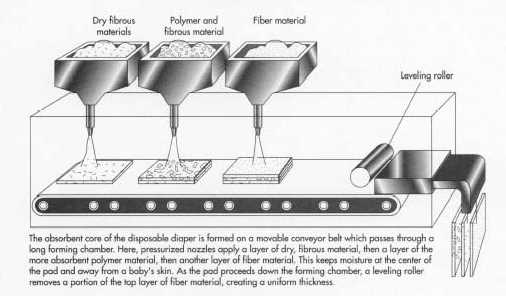 At least two methods have been employed to incorporate absorbent polymers into the pad.

In one method the polymer is injected into the same feedstock that supplies the fibres. This method produces a pad that has absorbent polymer dispersed evenly throughout its entire length, width, and thickness.

The problems associated with the method are that loss of absorbent may occur because the fine particles are pulled through the perforations in the conveyor by the vacuum. It is therefore expensive and messy. This method also causes the pad to absorb unevenly since absorbent is lost from only one side and not the other.

A second method of applying polymer and fibre involves the application of the absorbent material onto the top surface of the pad after it has been formed.

This method produces a pad which has absorbent material concentrated on its top side and does not have much absorbency throughout the pad. Another disadvantage is that a pad made in this way may lose some of the polymer applied to its surface. Furthermore, this approach tends to cause gel blocking, since all the absorbent is on the outside of the pad. The moisture gets trapped in this outer layer and does not have a chance to diffuse to the centre. This blockage holds moisture against the skin and can lead to discomfort for the wearer.

To overcome these major problems multiple spray dispensers are used to form several layers of polymer and fibre.

The first step is to draw fibres into the chamber to form a bottom, a portion of the polymer is added in a controlled way to mix and form a layer of combined polymer and fibre.

Finally, this process is more cost-effective because it distributes the polymer just where it is needed.

After the pad has received a full dose of fibre and polymer through dispensers, it proceeds down the conveyor path to a levelling roller near the outlet of the forming chamber. This roller removes a portion of the fibre at the top of the pad to make it a uniform thickness. The pad then moves by the conveyor through the outlet for subsequent operations to form the completed diaper.

Preparation of the nonwoven

Non-woven fabrics in web form are made at a different location and are brought in roll form then cut to the appropriate width for use in diapers. Sheets of nonwoven fabric are formed from the plastic resin using the melt blown process as described above.

There is a web for the top sheet and another for the bottom sheet. When the manufacturer is ready to initiate diaper production these large bolts of fabric are connected to special roller equipment that feeds fabric to the assembly line. 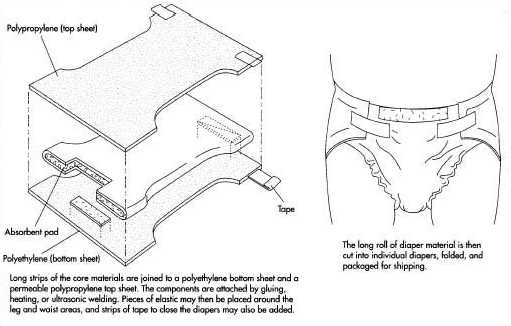 At some point in the process, stretched elastic bands are attached to the backing sheet with adhesive. After the diaper is assembled, these elastic bands contract and gather the diaper together to ensure a snug fit and limit leakage.