Bast fibers occur in the phloem or bark of certain plants. The bast fibers are in the form of bundles or strands that act as reinforcing elements and help the plant to remain erect. The plants are harvested and the strands of bast fibers are released from the rest of the tissue by retting, common for isolation of most bast fibers. The retted material is then further processed by breaking, scutching, and hackling.

The flax fiber from the annual plant Linum usitatissimum (flax family, Linaceae) has been used since ancient times as the fiber for linen. The
plant grows in temperate, moderately moist climates, for example, in Belgium, France, Ireland, Italy, and Russia. The plant is also cultivated for its seed, from which linseed oil is produced. A by-product of the seed plant is the tow fiber used in papermaking. 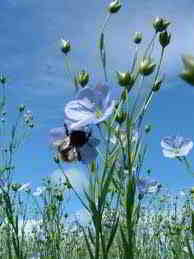 The bast fibers are dew or water retted with dew retting generally yielding a gray fiber. High-quality flax fiber is produced by water (stream) retting
in the river Lys in Belgium. The boiled, bleached fiber contains almost 100% cellulose. The flax fiber is the strongest of the vegetable fibers, even stronger than cotton. The fiber is highly absorbent, an important property for clothing, but is particularly inextensible.

The most important application is in linen for clothing, fabrics, lace, and sheeting. Flax fiber is also used in canvas, threads and twines, and certain industrial applications such as fire hoses. Chemical pulping of flax provides the raw material for the production of high-quality currency and writing paper. Flax fiber is also commonly used in cigarette papers. Flax fibers are graded for fineness, softness, stretch, density, color, uniformity, luster, length, handle, and cleanliness.

The source of hemp fiber is the plant Cannabis sativa (mulberry family, Moraceae) originating in central China. It is grown in central Asia and
eastern Europe. The stem is used for fiber, the seeds for oil, and leaves and fiowers for drugs, among them marijuana. The stalks grow 5–7 m tall and 6–16 mm thick. The hollow stems, smooth until the rough foliage at the top, are hand cut and spread on the ground for dew retting for the highest quality product. Water retting is used on sun-dried bundles from which the seeds and leaves have been removed. Strands of hemp fiber can be 2 m in length. The fibers are graded for color, luster, spinning quality, density, cleanliness, and strength.

It has a Z twist in contrast to the S twist of flax. Hemp is regarded as a substitute for flax in yarn and twine. Its earlier use in ropes has been replaced by leaf and synthetic fibers. Hemp fiber is used in Japan, China, Hungry, and Italy to make
specialty papers, including cigarette paper, but bleaching is difficult. The fiber
is coarser and has less fiexibility than flax. There is currently interest in reintroducing hemp into the United States and Canada as an alternate fiber crop
for farmers. However, this is wrought with political and legal problems due to
the inability to distinguish industrial hemp from hemp plants with high narcotic
content. 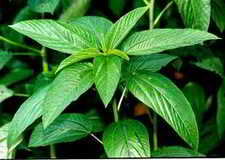 Jute fiber is obtained from two herbaceous annual plants, Corchorus
capsularis (linden family, Tiliaceae) originating from Asia, and C. olitorius originating from Africa. The former has a round seed pod, and the latter a long pod.
Jute is grown mainly in India, Bangladesh, Thailand, and Nepal.
The plants are harvested by hand, dried in the field for defoliation, and
water (pool) retted for periods up to a month.

The depth of the retting pools is dependent on the volume of rainfall during the monsoon season in Southeast Asia. Thus a year with fewer rainfall results in low water levels in the retting pools and a lower grade jute product due to contamination with sand and silt.

The fibers for export are graded for color, length, fineness, strength, cleanliness,
luster, softness, and uniformity. The color ranges from creamy white to reddish
brown, but usually, the fiber has a golden luster. The fibers are polygonal in cross-section with a wide lumen. Jute has traditionally been an important textile fiber, second only to cotton; however, jute has been steadily replaced by synthetics in the traditional high volume users such as carpet backings and burlap (hessian) fabrics and sacks.

The strands are also used for twine, while kraft pulping of jute gives ultimate fibers for cigarette papers. The Indian government in cooperation with the United Nations Development Program has been involved in a significant jute diversification program to find new uses for jute in finer yarns and textiles, composites and boards, and paper products. A particularly promising
an outlet for jute is in molded composites with thermoplastic materials for interior
automobile head, door and trunk liners. 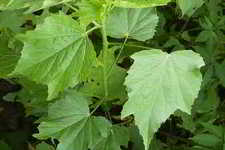 These closely related bast fibers are derived from Hibiscus cannabinus and H. sabdariffa (mallow family, Malvaceae), respectively.
The fibers have other local names. Kenaf is grown for production in China, Egypt, and regions of the former Soviet Union; roselle is produced in India and Thailand. Plantation-grown kenaf is capable of growing from seedlings to 5 m at
maturity in five months. It is reported to yield ~6–10 tons of dry matter per acre,
nine times the yield of wood.

The plants are hand-cut, mowed, or pulled in developing countries while
mechanized harvesting methods are under investigation in the United States.
Ribboning machines are sometimes used to separate the fiber-containing bark
before retting for recovery of the kenaf strands. For pulping, the kenaf is shredded or hammermilled to 5-cm pieces, washed, and screened.

The ultimate cells are nearly cylindrical with thick cell walls. Kenaf fibers are shorter and coarser than those of jute. Both chemical (kraft) and mechanical pulps have been produced from kenaf, and successful demonstration runs of newsprint have been made for the Dallas Morning News, the St. Petersburg Times, and the Bakersfield Californian with a furnish of 82% kenaf chemi-thermo-mechanical pulp and 18% softwood kraft pulp. Kenaf fiber is also considered a substitute for jute and used in sacking, rope, twine, bags, and as papermaking pulp in India, Thailand, and the Balkan countries. Roselle bleached pulp is marketed in Thailand. 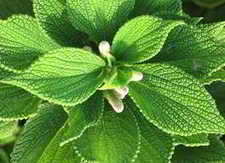 The ramie fiber is located in the bark of Boehmeria nivea, a member of the nettle family (Urticaceae). The plant is a native of China (hence, its name China grass), where it has been used for fabrics and fishing nets for
hundreds of years. It is also grown in the Philippines, Japan, Brazil, and Europe.

The ramie plant grows 1–2.5 m high with stems 8–16 mm thick. The roots send
up shoots on harvesting, and two to four cuttings are possible annually, depending on soil and climate. The plant is harvested by hand sickle and, after defoliation, is stripped and scraped by hand or machine decorticated. Because of the high gum (xylan and araban) content of up to 35%, retting is not possible. The fibers are separated chemically by boiling in an alkaline solution in open vats or under pressure, then washed, bleached with hypochlorite, neutralized, oiled to facilitate spinning, and dried.

The degummed, bleached fiber contains 96–98% cellulose. The ramie fibers are oval-like in cross-section with thick cell walls and a fine lumen. The cell wall constituents in the ramie fiber, like other bast fibers except flax, have a counterclockwise twist. Ramie is the longest of the vegetable fibers and has excellent luster and exceptional strength; however, it tends to be stiff and brittle. Wet strength is high and the fiber dries rapidly, an advantage in ffishnets

Traditional uses for ramie have been for heavy industrial-type fabrics such
as canvas, packaging material, and upholstery. Increased production of the fiber
in Asia, particularly China has promoted the use in blended fabrics with silk,
linen, and cotton which can now be found on the market.

The stems of the herbaceous plant Crotalaria juncea (legume family, Fabaceae), called sunn or sunn hemp, provide a bast fiber. The plant is native to India, the chief fiber producer, and it is also grown in Bangladesh, Brazil, and Pakistan. It has a long tap root and grows to a height of up to 5 m. Harvesting is done manually by pulling or cutting. The plant is defoliated in the field, water retted, and processed similarly to jute. The white fiber is graded by color, firmness, length, strength, uniformity, and extraneous matter content. Sunn is used for canvas, paper, fishing nets, twine, and another cordage.

These are less important vegetable fibers of a jutelike nature. Urena lobata (Cadillo) of the mallow family (Malvaceae) is a perennial that grows in Zaire and Brazil to a height of 4–5 m with stems 10–18 mm in diameter. Because of a lignified base, the stems are cut 20 cm above the ground.

The plants are defoliated in the field and retted similarly to jute and kenaf. The retted material is stripped and washed and, in some cases, rubbed by hand. The soft, near-white fiber is graded for luster, color, uniformity, strength, and cleanliness. It is used for sacking, cordage, and coarse textiles.

Abutilon theophrasti is a herbaceous annual plant producing a jute-like fiber. The plant is native to China and is commercially grown in China and the former Soviet Union. Because of its association with jute in mixtures and export, it is also called China jute. The plant grows to a height of 3–6 in with a stem diameter of 6–16 mm. After harvesting by hand and defoliation, bundles of the stems are water retted and the fiber is extracted by methods similar to those for jute. The fiber is used for twine and ropes.

At optimum maturity, the plants are pulled or mowed by hand or machine and, if necessary, threshed to remove seeds. The plants are spread out in a field to dry.

The removal of the bast fibers from bark and woody stem parts is promoted by a biological treatment called retting (rotting). This treatment is an enzymatic or bacterial action on the pectinous matter of the stem. After retting, the bundles are dried in fields. Retting may be carried out in several ways.

Dew retting involves the action of dew, sun, and fungi on the plants spread
thinly on the ground. Dew retting takes 4–6 weeks, but the action is not uniform
and it tends to yield a dark-colored fiber. However, it is far less labor-intensive
and less expensive than water retting. It is commonly used in regions of low
water supply and accounts for 85% of the western European crop, especially in
France, and also in the former Soviet Union.

Water retting involves immersion of bundles of plants in stagnant pools,
rivers, ditches (dam retting), or in specially designed tanks (tank retting). The
biological effect is achieved through bacterial action and takes 2–4 weeks for
dam retting. In tanks with warm water (tank retting), the time is reduced to a
few days. Water retting gives a more uniform product. In-stream retting, the
plants are immersed in slow-moving streams for a longer time and the quality
of the product is high.

Chemical retting involves immersion of the dried plants in a tank with a
solution of chemicals, such as sodium hydroxide, sodium carbonate, soaps, or
mineral acids. The fibers are loosened in a few hours, but close control is required to prevent deterioration. Chemical retting is more expensive and does not produce a superior fiber to that obtained from biological retting.

The dried retted stalks in bundles are passed through fiuted rolls to break or reduce the woody portion into small particles, which are then separated by scutching. The scutching is done by beating with blunt wooden or metal blades by hand or mechanically. 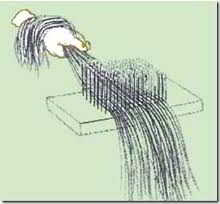 The bundles are hackled or combed to separate the short and long fibers. This is done by drawing the fibers through sets of pins, each
set finer than the previous one. As a result, the fibers are further cleaned and aligned parallel to one another.