A draft indicates the number of heald shafts used to produce a given design and the order is which warp ends are threaded through the heald eyes of the heald shaft. The principle of drafting (i.e. putting of ends on different healed shafts) is that ends which work in different order require separate heald shafts. To keep matters simple, we can also say that the ends that work alike are put on the same heald shaft.

The various drafts are classified as follows: 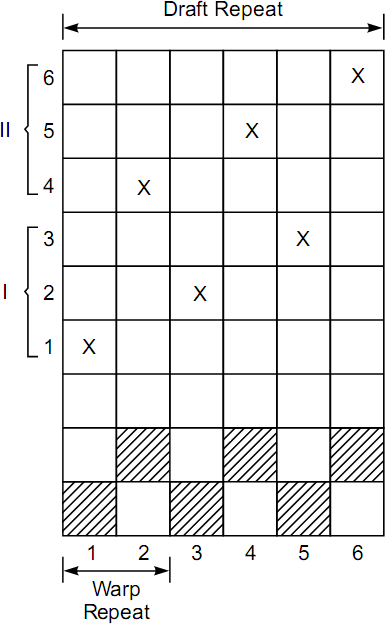 The skip draft is suitable for weaving fabrics having heavy warp thread density. In this kind of draft plan, the number of heald frames may be twice or more than the minimum required for a weave. The purpose of using more heald frames than the minimum recommended is only to distribute the warp threads more uniformly so as to prevent abrasion of the threads due to overcrowding. 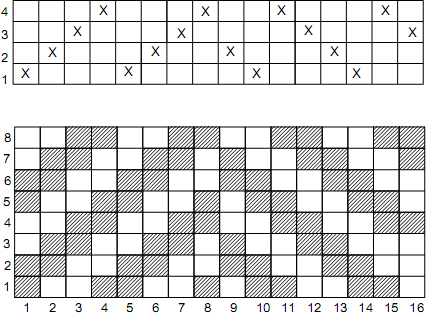 A broken draft almost resembles the pointed draft. However, the pointed effect is broken. This type of draft is suitable for weaves such as herringbone twills. 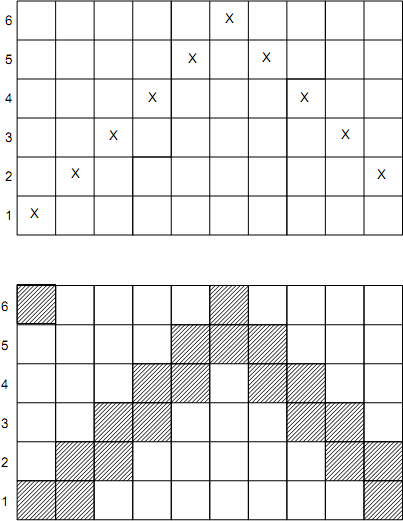 Various methods of drawing it can be combined in one draft for producing a certain type of fabric. Two or more drafts described above can be applied simultaneously, for example, straight and skip or sateen, grouped and curved, and so on. The combined draft is the most complicated and can be chosen only if there are some technological or economic reasons. The designer has a great experience can do it properly.

This is the most commonly used draft. It is the simplest of all the types of draft plans. In this kind of draft, the drafting order progresses successively from first to the last heald frame. Thus the first warp end of a weave is drawn through the first heald shaft, the second warp through the second heald frame and so on.

One important feature of the straight draft that distinguishes it from other types of draft plans is that the peg or lifting plan is same as the design. Hence it is sufficient to indicate only the design.

The relation between Design, Drafts and Lifting Plan

The construction of any woven fabric depends upon the design, draft and the lifting plan and these are very closely dependent upon one another. A thorough knowledge of this interdependence is very valuable to the designer upon whose skill several mechanical limitations of the loom may be imposed.

In many cases, it is only his innate acquaintance with the drafting systems and the possibilities of manipulating the lifting orders which enables him to introduce variety into apparently rigid mechanical systems of operation.

In normal practice, the designer has to produce a range of designs for looms with a known pattern scope. This usually involves the draft and the lifting plan construction. A similar procedure is adopted when the designer is asked to reproduce a specific design from a sample. The weave in the sample is analyzed and a suitable draft and lifting plan is derived. 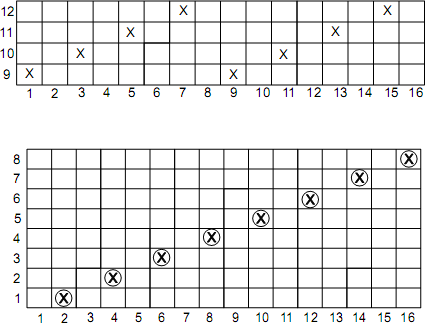 This draft is used for weaves having two series of warp threads such as terry, double cloth, warp backed cloth etc. As can be seen in Fig. 2.7, the two sets of warp threads, say, face and back warps are divided into two groups. The first group is for 8 heald shafts and second for 9-12 heald shafts. 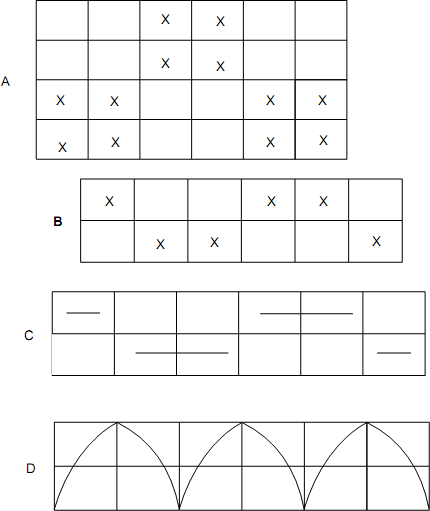 Warp ends during weaving are spaced out across the width of the warp sheet according to the desired density by the wires of the reed. The most frequent order of density is one, two, three, four ends per dent. There are some types of fabrics, however, which require an irregular order of denting to emphasize certain design feature, and in such cases the order of arrangement of the ends in the reed becomes an essential part of the design and must be indicated carefully and in the correct relationship in respect of the weave and the draft.

At A, is shown a matt weave design. The different denting plans for this design are shown at B, C, and D. However the type of denting plans shown at B is most commonly used.